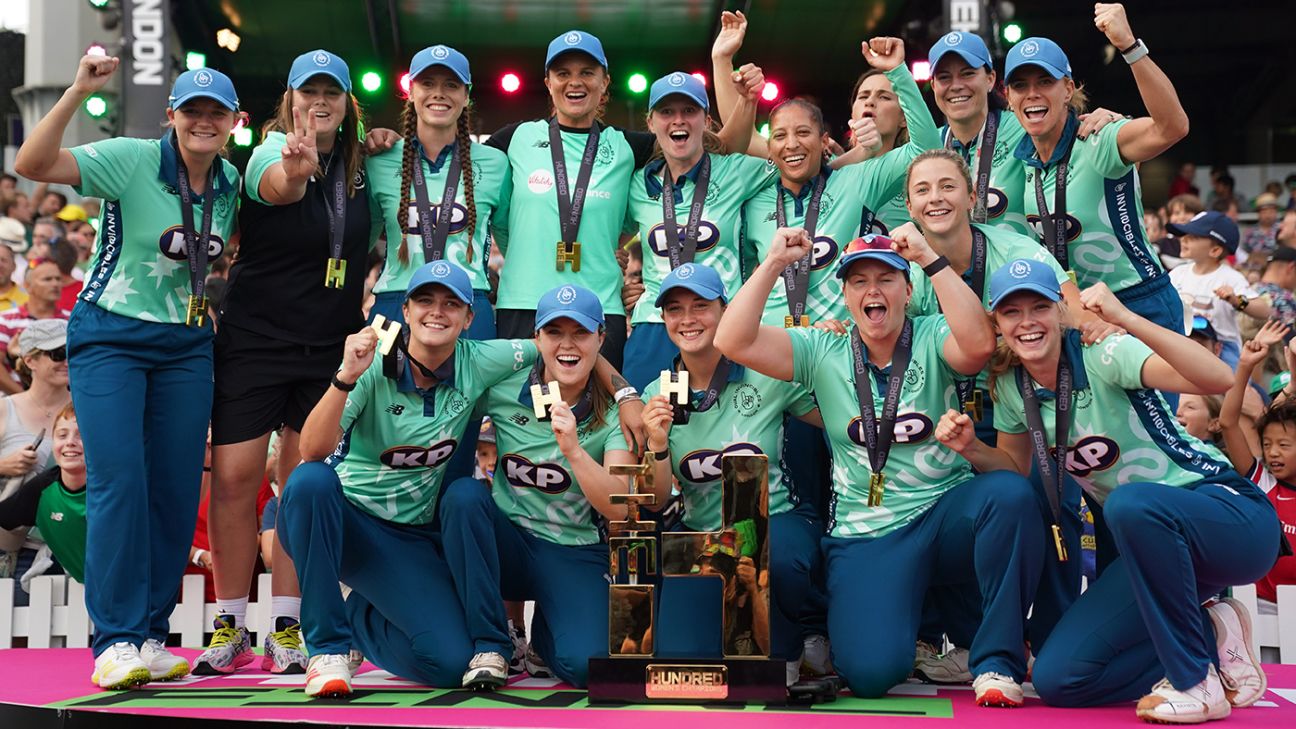 South Africa allrounder Marizanne Kapp has said she is “not a big fan” of the policy of having four overseas players for three slots in the women’s Hundred, and that the dropping of her wife, Dane van Niekerk, who captained Oval Invincibles to the title last year, could have been handled better by team management.
Kapp was once again player of the match in the final, as Invincibles beat Southern Brave at Lord’s for the second year running. This time around, however, Suzie Bates stepped up to lift the trophy after the New Zealand batter was preferred to van Niekerk, with Kapp and fellow South African Shabnim Ismail filling the other two overseas spots.
Bates, who was signed in the overseas wildcard draft, spoke earlier in the tournament about the unfamiliar experience of potentially having to miss out. In the end, Bates and Ismail played all seven of Invincibles’ games, with van Niekerk only featuring three times – skippering the side on each occasion – due to Kapp’s absence through injury or illness.

“Honestly speaking, I’m not a big fan of that,” Kapp said. “I think it’s good to have that wildcard but what other teams did well is they kept that as a back-up player. I’m big on keeping a side settled and going with your same playing XI unless someone is really badly out of form or injured or all of that. So I’m not big on changing the squad and changing captains. It’s not something I believe in.

“So it’s definitely a different experience. It helps that you have that fourth overseas, for when players get injured because, especially with us last year, myself and Shabnim, we were injured for quite a few games and obviously then your team-mates, it’s kind of unfair if they play the other teams and you have two international players not playing. So it’s a 50/50 but I’m not a big fan. I’m a big fan of having that overseas as a back-up, but chopping and changing is not something I really like.”

The situation for Invincibles head coach, Jonathan Batty, was complicated by the fact that van Niekerk, who was player of the tournament in 2021, had not played any competitive cricket since the WBBL last November, having suffered an ankle fracture at the start of the year. The injury caused her to miss the Women’s ODI World Cup in New Zealand, as well as the Commonwealth Games, and Kapp said she didn’t think van Niekerk was given a “fair shot” at winning her spot back with Invincibles.

“I know it’s hard and it’s a team sport,” Kapp said. “Ultimately you want your team to do well and Batesy has been brilliant for us and she’s been in such good form. So I understand completely why she had to play. But for me, it’s just how it was done, more than anything else. We are all professional cricketers, and big enough to know if someone else is doing better or if someone is performing better, so we knew she [Bates] had to be in the playing 11. But I just feel like it could have been done better.

“To be honest, if that was me, and I was coming here as last year’s MVP and captain and all of a sudden I’m just out without getting an opportunity, I would be pretty upset. I felt like she [van Niekerk] actually handled it well. I understand from the coach’s point of view, but there is that human element to it as well.

“It’s been very tough on Dane. She’s been working so hard to get back into things and she probably didn’t get a fair shot at playing, so you don’t kind of know where she is form wise. But having trained with her in preparation for the Hundred, she’s been hitting the ball the best I’ve probably seen throughout her career, so I’m excited to see her back in action especially for South Africa, to remind the world of how good she really is. I’ve always said, everyone’s speaking about me but if Dane’s back and firing like what she used to, she is probably one of the top three allrounders in the world.”

For now, Kapp is arguably in a league of her own, having collected the match award in the final of a major short-form competition for the third time in a little over 12 months. She missed the Commonwealth Games for personal reasons but there is the prospect of a home T20 World Cup on the horizon, when both Kapp and van Niekerk will likely be integral to South Africa’s chances of pushing for a maiden trophy success.

“I’m just going off to the Big Bash again this year, so I have that to focus on again, playing for the Scorchers. But after that, yes, definitely, I’m really excited for that World Cup. I’ve not played an international game at my home ground in Port Elizabeth, so it’s something I’m really excited about and the form that I’m in, I really feel like I can contribute a lot more. I was really sad to miss out on the Commonwealth Games, especially the form that I’ve been in. I’m enjoying my cricket. Hopefully I can contribute a bit more towards South Africa when we play again.”

Alan Gardner is a deputy editor at ESPNcricinfo. @alanroderick