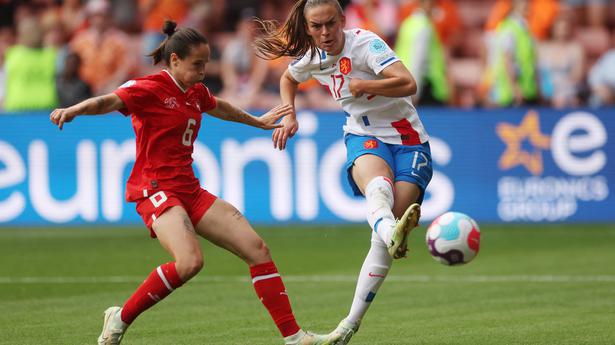 The Netherlands will face France in the quarterfinals of the women’s Euros after it thrashed Switzerland 4-1 to finish second in Group C on Sunday.

Three late goals for the Netherlands transformed a nervy afternoon into a comfortable final scoreline for the Dutch.

“I’m really proud of the whole team how we have done this in the group,” Dutch midfielder Sherida Spitse said.

“This win makes us so strong, not only the starting 11 but also the players that are coming in and what kind of energy they are bringing in for us.”

A Swiss own goal had opened the scoring as Ana-Maria Crnogorcevic diverted a Stefanie van der Gragt header into her own net shortly after halftime.

Switzerland kept the pressure on, though, and replied four minutes later when Geraldine Reuteler slotted in from close range to draw the scores level.

Forward Coumba Sow went close to putting her side ahead soon after, but was denied by Dutch goalkeeper Daphne van Domselaar from close range before she then hit the post with the rebound.

Van Domselaar was called into action again, tipping over Riola Xhemaili’s drive from long range to keep her side in the game. Switzerland continued to trouble the Dutch with Ramona Bachmann an energetic force on the left wing, but their efforts were to no avail.

With record goalscorer Vivianne Miedema still ruled out after testing positive for COVID-19 on Tuesday, the Dutch looked to their bench to provide their scoring spark.

Romee Leuchter netted her first goal for her country and earned her side victory when she headed Stefanie van der Gragt’s cross over the head of keeper Gaelle Thalmann in the 84th minute.

Victoria Pelova added another which was awarded after a lengthy VAR check before Leuchter sealed the result with her second goal of the game five minutes into added time.

“The first half was very difficult but later we came into our groove,” Spitse added.

“I am very proud of the way the substitutes have played, it was a collective performance. I like how all the girls played, the experienced as well as the new players.”

Switzerland bowed out of the competition after finishing third in the group while the Dutch will play France on 23 July in the quarters.