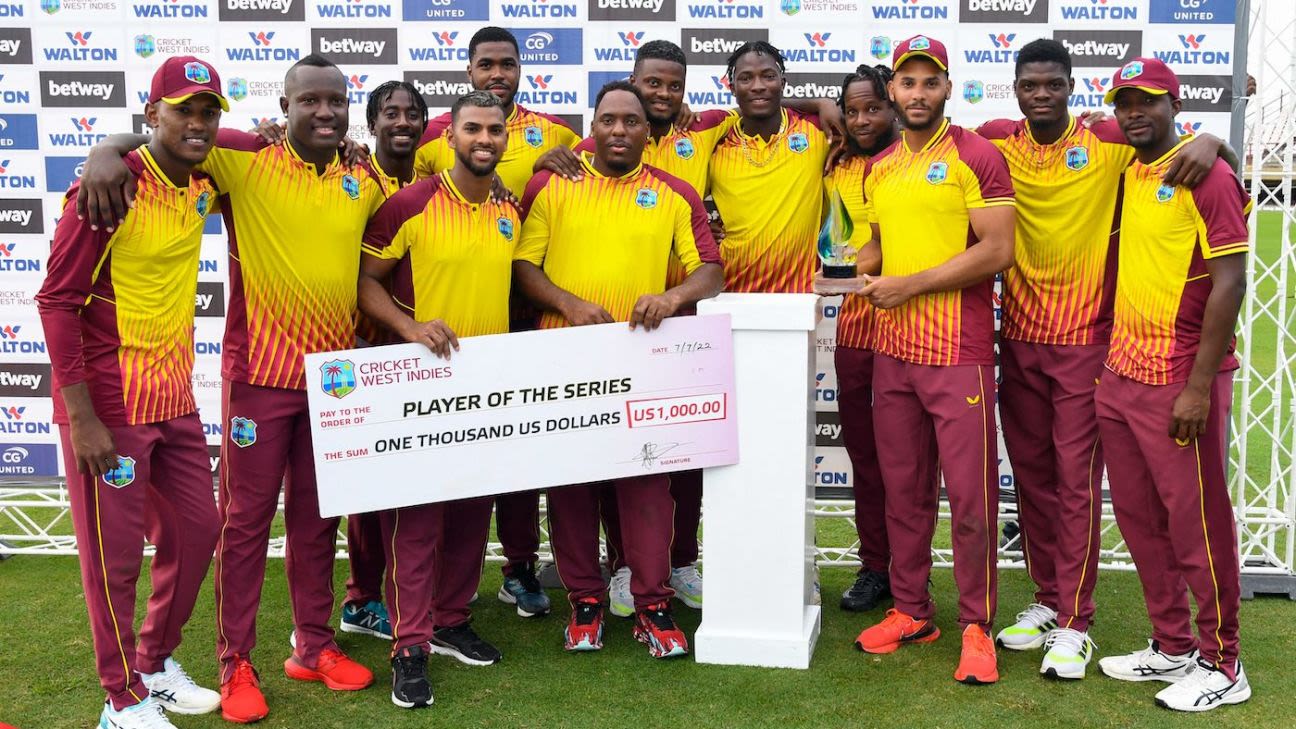 Nicholas Pooran might have won the Player-of-the-Match award for his unbeaten 39-ball 74 in the final T20I against Bangladesh, but he feels Kyle Mayers‘ 55 off 38 balls at the top of the West Indies chase made his job simpler than it might have been otherwise.

Set 170 to win the three-match series, West Indies were 43 for 3 just after the powerplay, and Mayers, who had opened the batting, was on 18 from 16 at that stage. But with Pooran for company, Mayers opened up, and the next 22 balls he faced went for 37 in an 85-run stand for the fourth wicket.

“I was telling Kyle how well he was batting out there,” Pooran said afterwards. “It was a top innings. He was putting away the loose balls. The bowlers were under pressure even though they were on top of the game. We want to continue to do that as a batting unit. He made my job easier, to build the partnership with him.

“Our template was always to put the bowlers under pressure early in the over. Kyle put away anything loose from their offspinners. I think I fed off that today. In T20s, a partnership is the most important thing.”

Mayers said that he needed to balance aggression with good decision-making when approaching the chase, faced with a lot of spin up front. The first eight overs were bowled by spinners: Nasum Ahmed and Mahedi Hasan sent down three each in the powerplay, and Shakib Al Hasan and Mosaddek Hossain bowled the next two before the first sighting of a quick bowler, Mustafizur Rahman, in the ninth. It was the first time Bangladesh had bowled spinners in the first eight overs of a T20I innings. And it worked, keeping West Indies down to 56 for 3.

“I just felt like we didn’t come out with the right attitude [while fielding]. It was a bit disappointing. We will definitely have a chat about it”

“I thought we approached it very sensibly,” Mayers said. “But still we were aggressive. We needed to put pressure on the bowlers. I thought we made some very good decisions in terms of shot selection. It was crucial. We closed out the overs very well [the win was achieved with ten balls in hand].

“I just tried to put away the loose deliveries. It didn’t matter who was bowling at the time. Just staying in the moment and choosing the right deliveries to go after.”

Pooran rated his own innings highly, because, as he said, he managed to close out the game. But he wasn’t pleased with the effort in the field earlier – the stump mics caught him expressing his frustration more than once.

“It is one of the best innings I have played for West Indies. Just because of the fact that I was there till the end,” he said. “It is something that I have always wanted to do.