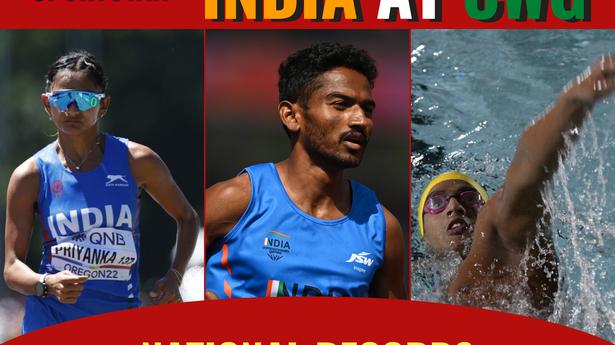 Avinash Sable’s historic silver in the men’s 3000m steeplechase in Birmingham came with a timing of 8:11.20.

Sable not only ended the Kenyan hegemony in the event at the Commonwealth Games – the East African nation had monopolised the CWG podium since 1998 – but he also bettered his own National Record for the ninth time. Before coming to Birmingham, the Indian achieved his personal best of 8:12.48 at the Rabat Diamond League in June this year.

Podiums by countries in 3000m steeplechase since the 1998 CWG

This is the magnitude of Avinash Sable’s silver today! 🤯 pic.twitter.com/vp95YFtmXZ

Weightlifter Bindyarani Devi clinched the silver medal in the women’s 55kg category in Birmingham. Her 86kg lift in the final attempt in snatch was a new personal best and equalled Mirabai Chanu’s National Record. However, in the last lift of the clean and jerk and the competition, Bindyarani lifted 116kg to break her own National Record of 114kg from 2021 World Championships and beat Fraer Morrow of England for silver.

The final clean and jerk lift also helped Bindyarani better her own national record (198kg previously) for a total lift.

Lovepreet Singh won bronze in the men’s 109 kg weightlifting. Lovepreet’s lifts of 163kg (snatch) and 192kg (clean and jerk) helped him post a total lift of 355kg. He broke his national records in both the snatch (162kg) and clean and jerk (188kg) set at the National Championship in Bhubaneswar in March earlier this year.

Gurdeep Singh bagged bronze in the men’s +109kg category with a total lift of 390kg. While Gurdeep’s only lift in the snatch – 167kg – was 5kg less than his personal best and the current National Record, he did break the NR in the clean and jerk segment, lifting 223kg in his final attempt. The previous NR of 221kg was set by him at the National Championship in Bhubaneswar in March earlier this year.

Swimmer Srihari Nataraj bettered his own National Record in men’s 200m backstroke at the Commonwealth Games. Srihari clocked 2:00.84 to finish third in heat 2 at the Sandwell Aquatics Centre, improving his own timing of 2:01.70 from 2019. However, the Indian finished ninth overall across heats and failed to make it to the top eight for the final by 0.19 seconds

Indian cyclist Meenakshi finished last in the women’s 3000m individual pursuit qualifying in Birmingham with a timing of 3:49.596s, better than her own National Record of 3:50.223s set during the Asian Championships in June.