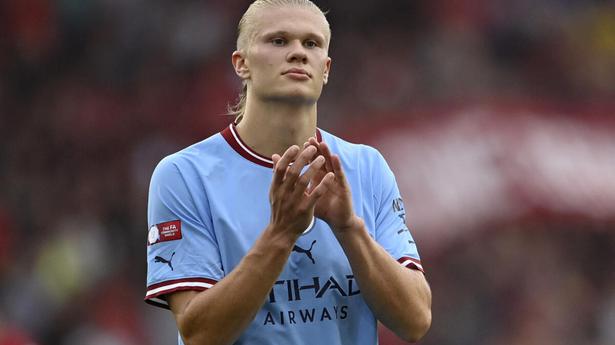 Welcome to Sportstar’s live blog of the Premier League match between West Ham United and Manchester City from the London Stadium in England.

Premier League champion Manchester City starts its campaign against West Ham United. After losing four home games in the league against City in which it conceded 17 goals, West Ham has drawn the last two, including a 2-2 stalemate in May. West Ham has beaten City only nine times in 42 Premier League meetings, with seven of those wins coming at home. New City signing Erling Haaland could make his Premier League debut for the champion.

After losing four home games in the league against City in which it conceded 17 goals, West Ham has drawn the last two, including a 2-2 stalemate in May. West Ham has beaten City only nine times in 42 Premier League meetings, with seven of those wins coming at home. New City signing Erling Haaland could make his Premier League debut for the champion.

City must hit the ground running

Pep Guardiola said the fine margins that have decided the Premier League title race in recent years means it is crucial that Manchester City hit the ground running when its campaign begins on Sunday.

City beat Liverpool to the title by a point last season, and in the 2018-19 campaign, and Guardiola said any slip-up could result in a team being out of the race by November when the league goes on break for the World Cup.

“I have the feeling every time we start the press conference that this season is harder,” Guardiola told reporters on Friday ahead of their season-opener at West Ham United. “I think next season cannot be harder but it is.

“Every club is getting better, the managers are so exciting and that is why the Premier League is the best.

“(This year) there are two seasons, one before the World Cup, you can’t win it before but you can lose it … We won two Premier Leagues by one point, we know we can win 12-14 games in a row. Liverpool as well. You have to start well.”

Bernardo Silva has been linked with a move away from City and though Guardiola said he wants the Portuguese midfielder to remain at the club he will not force any player to stay.

“I would love for Bernardo to continue here, he’s a very special player in the locker room,” he added. “What happens will happen, if he stays it is perfect, if he has to leave it’s because football is like this.”

City is looking to sign a left back following the departure of Oleksandr Zinchenko to Arsenal and target Marc Cucurella already having signed for Chelsea. Guardiola said he has cover for the position until the end of the transfer window.

“Joao Cancelo is there, Nathan Ake can play there. We will see, we still have time until the end of the month,” Guardiola said.

Aymeric Laporte misses the trip to West Ham after the 28-year-old defender had surgery for a knee injury.

West Ham United’s new striker Gianluca Scamacca will miss its Premier League opener against champion Manchester City as he is short of match fitness following his move from Italian Serie A side Sassuolo, manager David Moyes said on Friday.

Italy international Scamacca joined the London side last month on a five-year contract but Moyes said Sunday’s match comes too soon for the 23-year-old.

“Scamacca has only just really joined us, so he’s probably a little bit behind, so I’m not expecting him to be available this weekend,” Moyes told reporters.

“He’s not had the chance to play… so it probably makes it very difficult for us to put him out on the pitch so soon. His training is a little bit behind compared to the others. He has trained, but maybe not as regular and as consistent.

“The transfer took quite a bit off as they pulled him out of some games and training at the time, so we’ve got him in and I like what I see, but we’re trying to get him in the best condition we can and get him ready to play.”

Where can you watch the match?

The West Ham United vs Manchester City match is being broadcasted in the Star Sports Network. Disney Hotstar is streaming the match online.