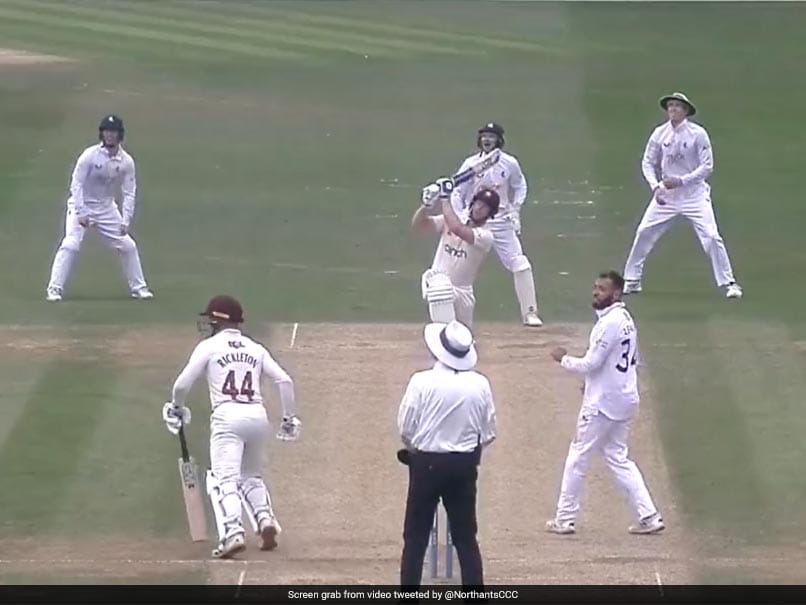 James Neesham plays a shot during the County match between Northamptonshire and Kent.© Twitter

Ever since New Zealand legend Brendon McCullum took over as the head coach of the England men’s Test team last month, ‘Bazball’ has become the buzzword among cricket fans. Playing an aggressive brand of cricket, England notched a commanding 3-0 win over New Zealand at home and followed it up with a record chase against India in the rescheduled 5th Test. While McCullum himself has labelled it a “silly term”, ‘Bazball’ is surely becoming a part of cricketing lingo, especially when it comes to playing aggressive knocks in red-ball cricket.

New Zealand all-rounder James Neesham, playing for Northamptonshire in the ongoing County Championship season, hit a rapid 91 off 101 deliveries in their second innings against Kent.

Northamptonshire took to Twitter to share highlights of Neesham’s innings. “So it turns out @JimmyNeesh hits a red ball super hard too,” they wrote along with the video.

His knock, along with Ryan Rickleton’s century, helped Notts reach 284/5 at Stumps on Day 3. Northamptonshire had scored 303 in their first innings, thanks to opener Emilio Gay‘s 112.

At Stumps on Day 3, Northamptonshire had a 252-run lead.

Neesham and McCullum, of course, go back a long way.

The all-rounder made his Test debut under McCullum’s captaincy against India and scored a swashbuckling 137 off 154 balls as his skipper went on to hit 302.