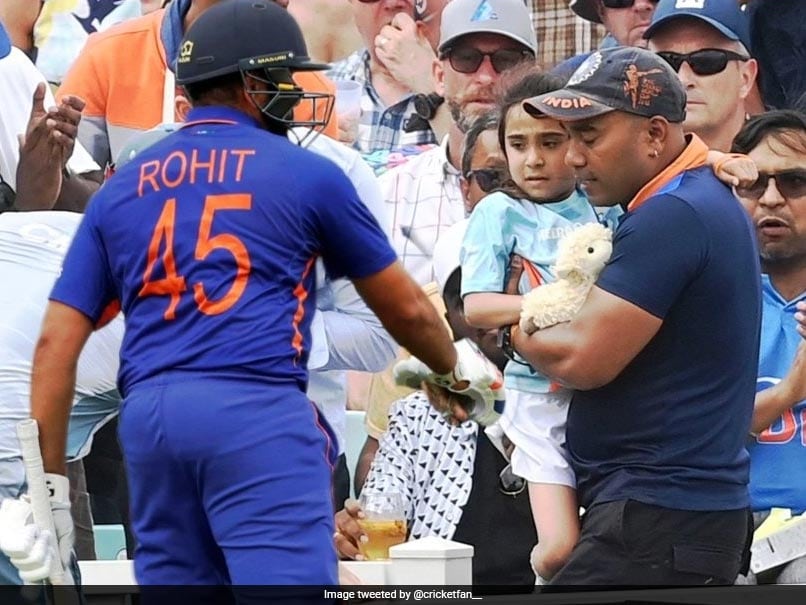 Skipper Rohit Sharma on Tuesday roared back to form with a brilliant half-century in the first One Day International (ODI) against England at The Oval in London. However, during the match, one of his trademark pull and hook shots struck a young fan in the stands, which halted the game for a few minutes while she was attended by the medical team of the England cricket team.

The incident happened in the fifth over by David Willey. After the shot, the broadcaster showed visuals of a man holding a kid in his arms. Commentators also said that the ball, which landed in the stands, had hit the kid. Once the game resumed, Rohit Sharma continued his onslaught on the English bowlers and thrashed England by 10 wickets in the first of the three-match series in London.

However, now, a photo of Rohit Sharma meeting the kid has gone viral online. According to a social media post, the Indian skipper met the girl, identified as 6-year-old Meera Salvi, after the match and apparently gave her a chocolate.

Take a look at the image below:

Rohit Sharma met the girl after the match who got injured by Rohit’s six and gave her chocolate. Nice gesture by the Indian Captain 👏 pic.twitter.com/thFlfro1Bb

Another Twitter post also revealed that Team England gifted the girl a jersey following the match. She was all smiles after receiving the gifts from Rohit Sharma and the England cricket team.

Meera Salvi, a six year old girl in crowd was hit on the back by a six by #RohitSharma . Game temporarily halted to see whether girl had sustained any injuries. Girl received medical care, and match continued. Rohit took her father’s phone no. Team England gifted her a Jersey. pic.twitter.com/Hi20JYhjAi

The adorable gesture by the Indian team captain certainly won hearts in the cricketing fraternity. Many users tweeted in support of Rohit Sharma.

Meanwhile, on the professional front, on Tuesday, Rohit Sharma became the first Indian batter to achieve a major feat in the ODIs. He became only the first Indian batter, and fourth overall, to hit 250 sixes in ODIs. Only Pakistan’s Shahid Afridi, West Indies’ Chris Gayle and Sri Lanka’s Sanath Jayasuriya have hit more sixes than the India skipper in the 50-over format.