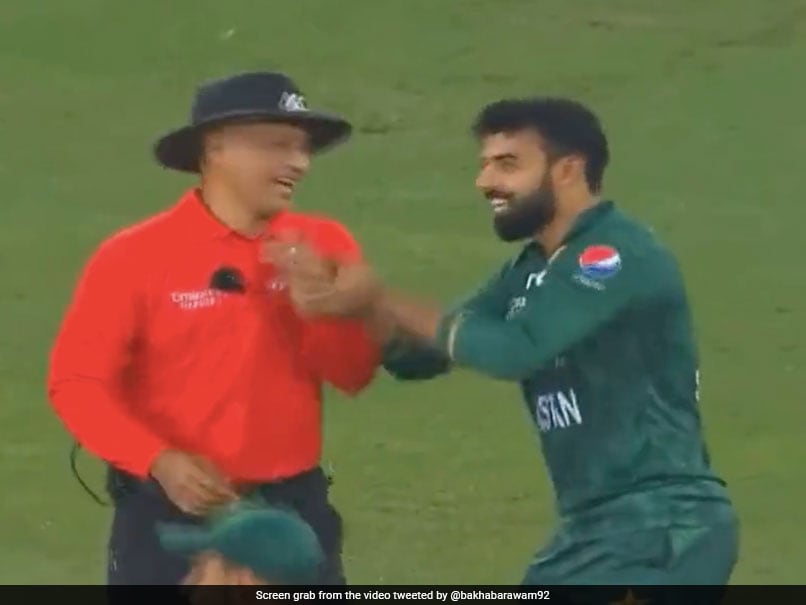 Sri Lanka lifted their sixth Asia Cup title after beating Pakistan by 23 runs in the final at the Dubai International Stadium on Sunday. After being put in to bat, Sri Lanka lost three wickets in the powerplay, and lost half of their batters for a total of 58. However, Bhanuka Rajapaksa hit an unbeaten 71 off 54 balls to steer Sri Lanka to a strong total of 170 for six in 20 overs. However, he was lucky to have stayed on the pitch for that long, having survived an LBW appeal in the final over of the powerplay.

Haris Rauf, who had already taken two wickets, struck Rajapaksa on his pads in the penultimate delivery of his second over.

While the umpire did not raise his finger, Pakistan players went for the DRS. However, the decision stood due to umpire’s call on impact.

After the review, Pakistan all-rounder Shadab Khan was seen joking with the on-field umpire.

In a light hearted incident, Shadab jokingly trying to raise the umpire’s finger as the two shared a laugh

The incident went viral on social media in no time.

Sri Lanka were 67 for five halfway through their innings, collecting 103 runs in the last 10 overs to reach 170 for six.

Chasing 171 for victory, Pakistan were bowled out for 147 with Pramod Madushan claiming four wickets and Wanindu Hasaranga taking three for 27.

Mohammad Rizwan top-scored for Pakistan with 55 off 49 balls.