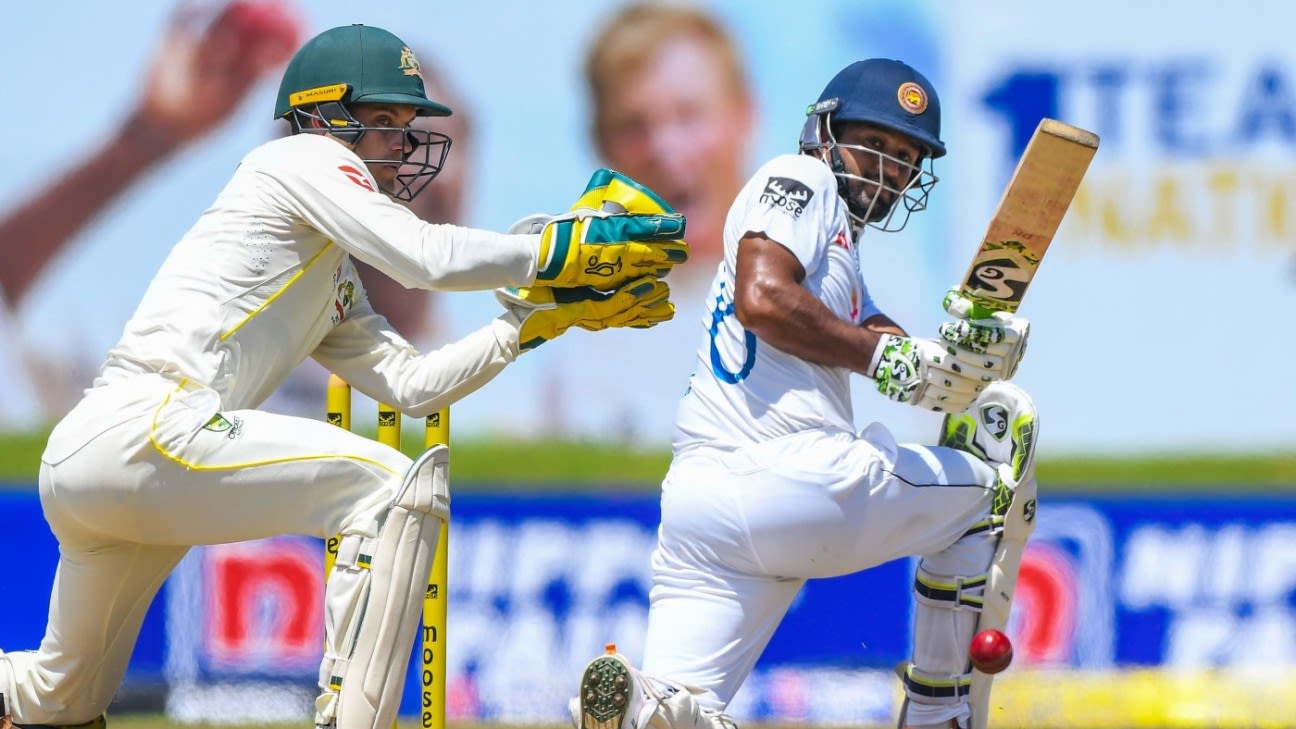 Don’t panic. Keep things simple. And you don’t necessarily have to sweep (if you don’t want to). This, Dimuth Karunaratne said, was his advice to Sri Lanka’s batters ahead of the second Test in Galle. They had stumbled to 212 and 113 in the first Test, while Australia made 321 in their first innings.

With a slightly better batting pitch expected for the second match, Karunaratne hoped his batters could put up a total that would give an inexperienced spin attack something to bowl at.

“When we’ve won matches here, it’s not generally on tracks that turned from ball one,” Karunaratne said. “It’s when we batted well and used that scoreboard pressure to give the spinners a cushion – that’s when we’ve won here. We don’t have Rangana Herath or Dilruwan Perera anymore, so the spinners have to do what they can.

“But as a batting unit, we need to put up a big first-innings score. That’s where you set the tone for the bowlers to build that pressure.”

How to put up those scores when the opposition spinners are all over you, though? Nathan Lyon claimed nine wickets in the first game, Mitchell Swepson took five, and even a rank part-timer in Travis Head took four second-innings wickets.

Half of Sri Lanka’s batters had fallen attempting to sweep or reverse sweep in that second innings, with new head coach Chris Silverwood suggesting after the match that mastering that stroke was crucial to Sri Lanka’s success on turning tracks. Karunaratne, though, did not put such an emphasis on the sweep in his chats with team-mates.

“The sweep is just one option against spin. If you’re batting well, there are a lot of options there for you,” he said. “Everyone’s game plan has to be different. Not everyone can sweep well. Everyone’s got a unique method, and I’ve told everyone to play in their own unique way, without putting much pressure on themselves.

“Without trying too many new things, what’s important is to improve the things you already know how to do. We’ve had separate training sessions for the batting unit. We know where we failed.”

Karunaratne had a poor Test personally as well, making 28 in the first innings and 23 in the second. He was dismissed by Lyon on both instances, the first as he came down the track, and the second as he attempted to sweep. He is a vital part of Sri Lanka’s top order, having hit match-winning innings in Galle over the past several years. But he won’t let the battle with Lyon play on his mind too much.

“I’ve got a very simple plan for myself. I’m not going to change what I’m doing based on what happened in the last match,” he said. “This is a new game. Perhaps the pitch will be better for this game than the last one. I’m going through the routine that has brought me success.

“I have a plan for the first 15 overs, and then what I need to do to build an innings. As a senior batter, I’m trying to take as much responsibility as possible.”