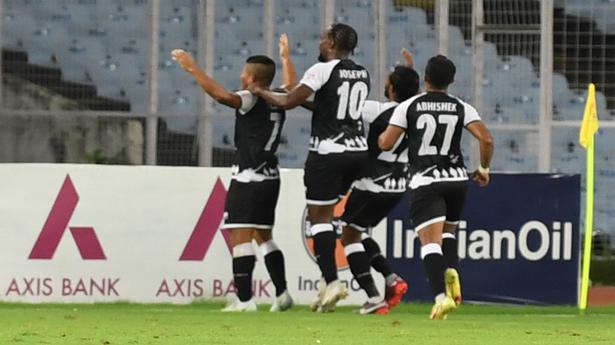 N. Siva Sakthi played the real super-sub to find the equaliser in injury time and helped Bengaluru FC hold a 10-man Mohammedan Sporting to a 1-1 draw in the concluding Group-A league match of the 131st Durand Cup football, at Salt Lake Stadium here on Friday.

Mohammedan Sporting took the lead early in the first quarter of the action of a Pritam Singh effort and appeared to be headed for its fourth successive win but Siva Sakthi spoiled its party producing the last-gasp equaliser.

The result saw Mohammedan Sporting emerging as the group champion with 10 points from three wins and the draw. Bengaluru FC finished second with eight points from two wins and as many draws. The top two sides progressed to the knock-out stage (quarterfinals) and will have to wait till the end of the league stage to know their next-round opponents. Jamshedpur FC (six points), FC Goa (four) and Indian Air Force (zero) exited from the league stage.

Mohammedan Sporting looked the more organised side and kept the star-studded Bengaluru FC under pressure right from the start. The local giant found the lead in the 13th minute when its wing-back Abhash Thapa essayed a back-centre which was met with a rasping volley from Sheikh Faiaz. Bengaluru goalkeeper Lara managed to block the shot but Pritam was close by to slot home the rebound.

Mohammedan Sporting was reduced to 10 men in the 74th minute when its midfielder Abhishek Halder was marched off with the second booking of the match. Bengaluru continued to push for the equaliser and failed repeatedly as its attack combination of Sunil Chhetri and Roy Krishna failed to make much in the Sporting box. Siva Sakthi, who came in as a late substitute, finally came to the rescue of Bengaluru FC and helped it preserve the unbeaten record against Mohammedan Sporting.

Dipu Mirdha struck in the 64 th minute and Gani Ahmed Nigam converted a penalty in stoppage time to save North East from the ignominy of finishing at the bottom of Group D.