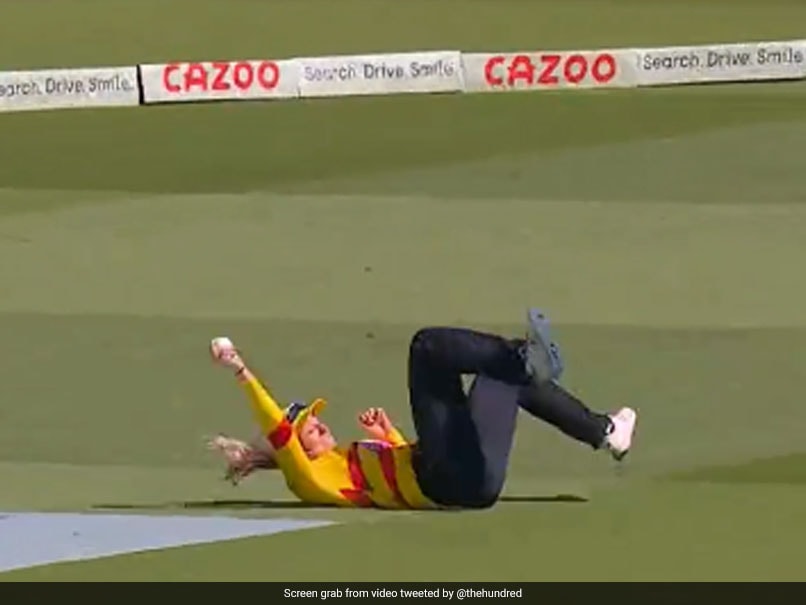 Sarah Glenn takes a one-handed catch to dismiss Lizelle Lee in the women’s The Hundred.© Twitter

England bowling all-rounder Sarah Glenn took a sensational catch in the ongoing The Hundred women’s tournament on Saturday. While representing Trent Rockets against Manchester Originals at the Old Trafford in Manchester, Glenn showed amazing athleticism to send the opponent’s opener Lizelle Lee back to the hut. On the 24th ball of the innings of Manchester Originals, Lizelle tried to hit Kathryn Bryce over mid-off fielder but Glenn ran behind and timed her jump to perfection to complete the catch. She took the catch and dived beautifully to make sure the catch is taken cleanly.

Over the shoulder.
On the dive.
One-handed.@Lg3Sarah with a CRACKER #TheHundred pic.twitter.com/U5Mao05IQf

Taking about the match, Trent Rockets posted a total of 119 for 5 batting first. Wicketkeeper Abigail Freeborn led the innings with her unbeaten 45-run knock that came off 38 balls. Her performance included seven fours. Meanwhile, Alana King’s cameo of 19 not out off 9 balls also helped the team’s cause.

In reply to Trent Rockets’ total, Manchester Originals were all out for 76 runs. The side kept losing wickets at regular intervals and fell well short of the opponent’s total. Lizelle was their top run-scorer with a 13-ball 17.