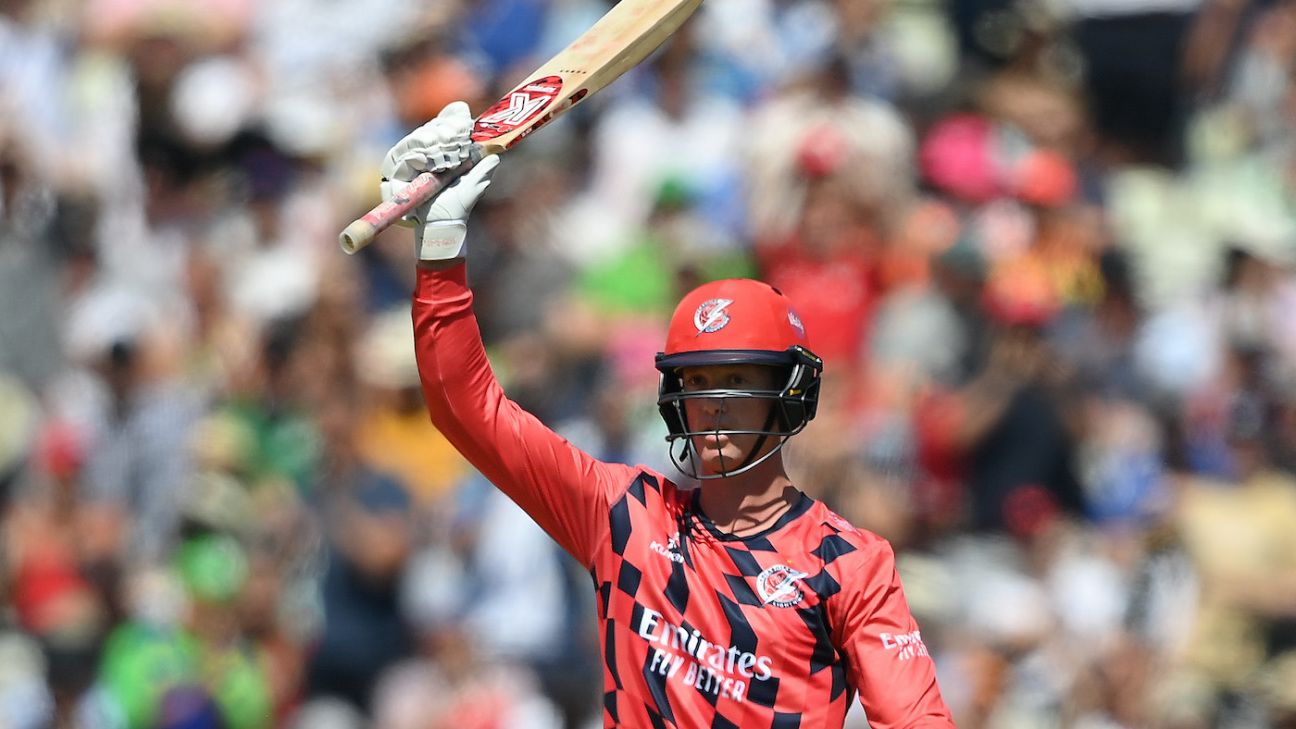 What do we know about Keaton Jennings? A long-game accumulator, good enough to win 17 England Test caps. So highly valued by the former England coach, Andy Flower, that he saw him as a future England Test captain. A good man, with good habits, but 30 now and has never had a sniff in the limited-overs formats. Nobody has ever expected him to.

What might have passed us by? He now has three half-centuries on Finals Day, and nobody has made more. The latest – 75 from 51 balls – was enough to guide Lancashire into the Blast final by six wickets with eight balls to spare. His range is extending, he played with elegance and equanimity and, in the heat of a Roses T20, neither quality is seen in abundance.

Jennings certainly arrived at Edgbaston in blissful form. If you must drag yourself wearily from the field on Thursday evening after a four-day Championship match, only 40 hours before a semi-final, as these two sides did at Southport and Scarboriugh respectively, then do so with a triple-century to your name.

Yorkshire’s 204 for 7 was the second highest total on Finals Day, where nerves are often a handicap, but they never looked like defending it. Lancashire took heart in the fact that they held the highest (217 for 4 vs Surrey in 2005). More relevant was a golden summer’s day and the potential vulnerability of Yorkshire’s pace attack in the absence with England of their T20 captain, David Willey, who has bowled the most difficult overs all season and offered wise counsel to the rest of the attack.

Alongside Jennings, Dane Vilas saw things through, his contribution an unbeaten 63 from 36 balls. He is one of the temperamentally strongest T20 performers, a shrewd manipulator on both sides of the wicket. And he had the satisfaction of standing tall and proud and punching the matchwinning six off Matthew Revis over deep cover. There were a couple of dicey moments on the way – a top-edged sweep against Shadab Khan dropped wide of short fine leg and Harry Brook, the stand-in skipper, nearly clung to a half-chance at short extra – but he shared in a low-risk partnership of 112 in 65 balls.

An immense Powerplay of 89 for 2 had released the pressure. Phil Salt was the main provider, 36 from 15 balls. Revis, in his first full bowling season, found him impossible to contain as he conceded 25 from four balls. The first six only just cleared Will Fraine at deep square leg, but by the time he suffered a free-hit six over long-on, the over was coloured a deep shade of extreme red. He responded spiritedly, a back-of-a-length ball that had Salt caught at the wicket, only for Steven Croft to take up the cudgels to take the runs tally to 29.

Jordan Thompson was unable to repeat his quarter-final rescue act against Surrey with the ball – this time he did his utmost with the bat. His 50 from 18 balls was an adrenalin-fuelled affair, sweeping Yorkshire past 200 when they would have settled at one stage for 20 fewer. He has the prodigious appetite of a bona fide seam-bowling allrounder, but he has been employed by Yorkshire further down the order this season, especially in the Championship. A season’s tally of 88 runs at an SR of 107 hardly identified him as a danger, but he was promoted to No. 6, a nod to his appetite for the big occasion, and necessary, too, because Yorkshire were light on batting resources.
He came in at 124 for 4 after Tom Kohler-Cadmore, who is leaving for Somerset had dished up a farewell performance of 66 from 44 balls. At his height, he took five sixes off seven balls, the first three off Danny Lamb, the next two from Gleeson, brought down to earth a week after his England debut, his four overs leaking 54. Gleeson ended it with his final delivery – a bouncer hooked to deep square – and the energy departed from Yorkshire’s innings, the final over becoming a scramble for whatever they could get.

The quick departure of Adam Lyth, slicing Luke Wood to deep point, was a blow; only four players had outdone his 525 tournament runs. Dawid Malan, in the other opener’s berth, was in good fettle for his 33 from 22, his guarded dink to third man operating at peak efficiency. Lancashire conceded 67 for 1 in the Powerplay – their second worst outcome of the season.

Lancashire entrusted 12 overs to their three pace bowlers, but it was a day when their spinners might have been given more licence. Matt Parkinson bowled Malan as he made room to force through the offside, lost Lancashire’s review as he sought an lbw against the advancing Brook, who was then bowled by Luke Wells, chopping on. Brook’s imperious form has faltered during a month in and out of various England squads.

Kohler-Cadmore took time to work out the surface. A nervy single off the mark against Gleeson would have seen him run out without scoring if Vilas’ had hit the stumps from mid-on, and a couple of mishit pulls fell safely into the legside. But gradually he found his touch and crucially won his battle with Gleeson, repeatedly pummelling him down the ground. Shadab Khan summoned his best score of the season (34 from 24), but with bat or ball never suggested he was about to transform the game.

And so Lancashire, comfortably the more consistent of the two Roses rivals this season, went through. They do so as county cricket’s frenzied day out celebrates its 20th anniversary with a little disquiet. Blast crowds have been 15 per cent down compared to a record year in 2019 and, however positively the ECB try to spin it, that was a summer of 24 abandonments compared to only six this year. Accommodation with the Hundred is just about possible, but only if the desire is there.