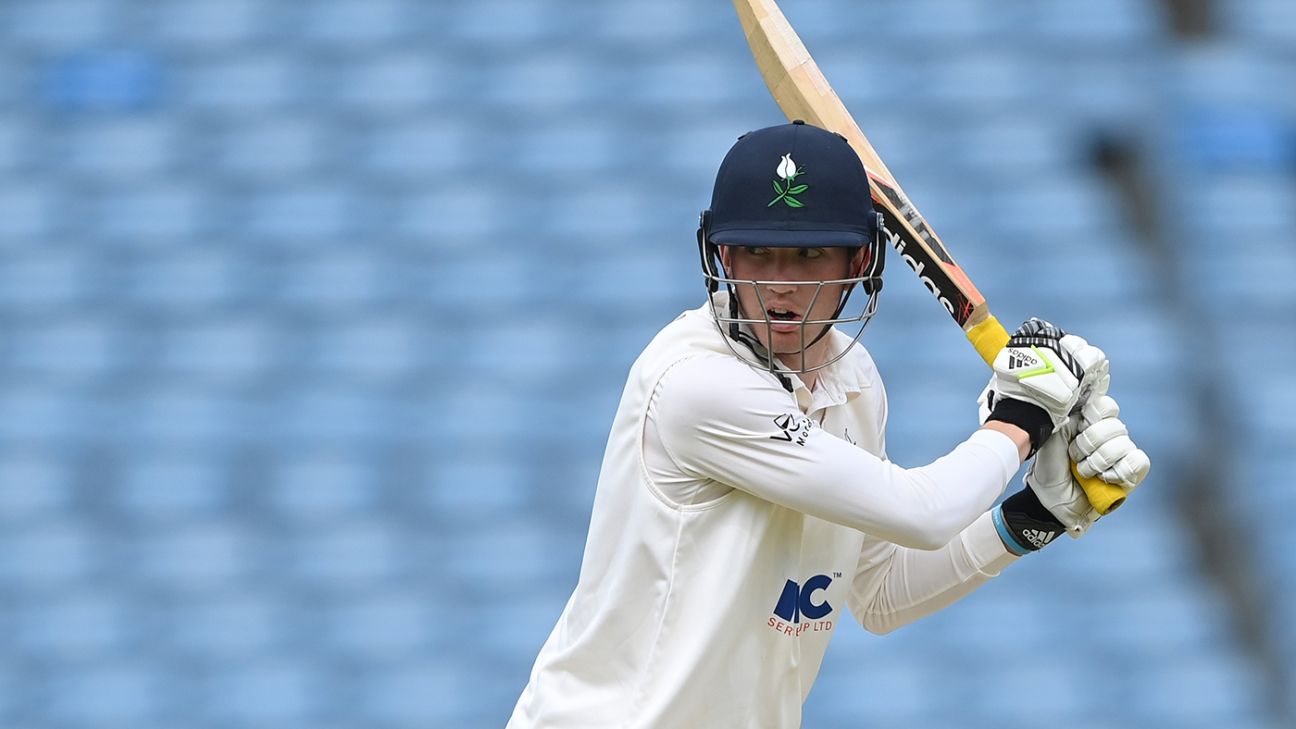 Hill came in with Yorkshire at 10 for 2 and finished with 130 off 131 balls. Yorkshire had slipped to 37 for 3 shortly afterwards, but the 21-year-old allrounder steered the ship towards a second win in three Group B games, achieved with 16 balls remaining.

Matthew Waite’s key all-round contribution of 3 for 21 from eight overs of seam and 36 – he shared 96 for the fifth wicket with Hill – also contributed to a third straight Worcestershire defeat.

Ben Cox impressed for them with a brisk 70 late in 246 for 8, but Hill had the final say in surpassing a previous best of 90.

Both top orders struggled on a pitch with extra bounce and nibble. Only flashes of success came during the first half of Worcestershire’s innings having been inserted.

Waite claimed two new-ball wickets against the county he played four games on loan with earlier this season, the allrounder enjoying his stay at New Road immensely.

Ed Pollock played on before Azhar Ali miscued Waite to mid-off, leaving the score at 18 for 2 in the eighth over. Gareth Roderick and Kashif Ali – 29 and 22 – failed to make the most of starts and fell to Tom Loten and offspinner Jack Shutt.

At 94 for 4 after 26 overs, the Rapids were encountering a polished Yorkshire bowling display. Ed Barnard then pulled Waite out to deep midwicket, where Dom Bess took a smart running catch – 119 for 5 in the 33rd.

The situation meant captain Jake Libby had to play a risk-free innings, and only two boundaries came in his 83-ball fifty, achieved shortly before the 40-over mark.

Unfortunately, his first real sign of aggression saw him top-edge a pull behind off Coad to fall moments later. But his 58 had built a platform from which Cox could attack. Powerful and inventive to leg, Cox reached his fifty off 38 balls.

He was particularly strong sweeping in pushing the Rapids up towards 250 and helped Joe Leach take 18 off Loten in the penultimate over before falling lbw as the second of two late wickets for Bess.

This was only Cox’s second game back after a near two-month break for mental health reasons, and this innings followed 59 not out in defeat to Kent last week.

Yorkshire then lost three wickets inside 11 overs. Leach struck first by trapping Will Fraine lbw, his opening partner Harry Duke later edging Adam Finch’s fifth ball behind to Cox. Sandwiched in between, Cox helped Dillon Pennington oust Will Luxton for a golden duck off the inside-edge.

But, in Hill and captain Jonny Tattersall, they encountered a third-wicket pair who calmly and confidently turned the game back in favour of the Vikings with an 87-run stand. Both played eye-catching strokes down the ground and through midwicket, Hill in particular, in 16 overs together. Minutes after reaching their half-century partnership, Hill secured a 47-ball fifty.

He was dropped on 53 by Roderick running in from deep midwicket off Leach. But Pennington returned to force Tattersall to play on for 45 shortly afterwards, leaving the score at 124 for 4 in the 27th over. Hill, who was venomous on the pull, found another partner in Waite, uniting for 15 overs.

Waite was dropped on 22, but the game was all but decided by then. That theory was strengthened almost immediately when Hill reached his ton off 96 balls, Yorkshire now 194 for 4 in the 38th.

The former England Under-19 celebrated arms aloft before getting back to it, pulling a six off Leach over long-on as the finish line fast approached. Waite was run out and then Hill caught at long-on off Libby with six needed. But it mattered not.