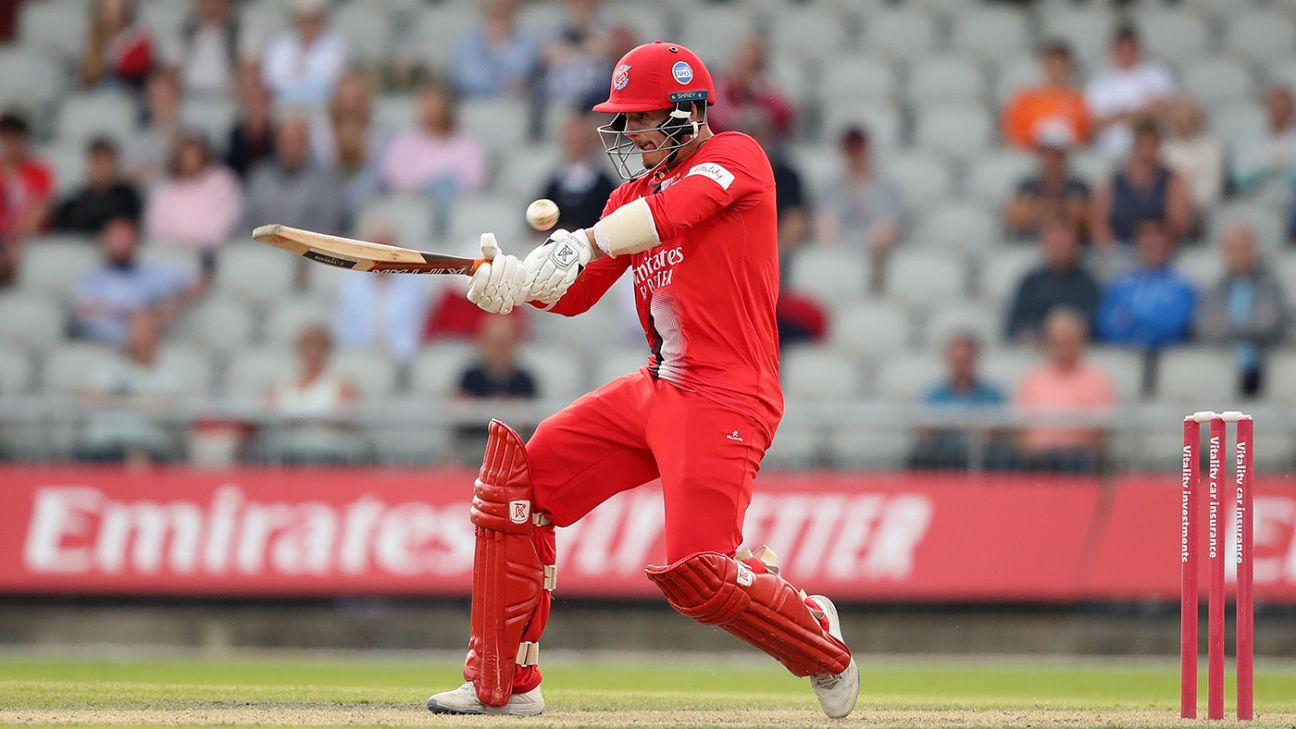 Lancashire returned to the top of Group B in the Royal London Cup on Wednesday evening when they eased to a comfortable six-wicket victory over Worcestershire in a floodlit tie at Emirates Old Trafford.

Needing 249 to secure their third victory in four games, Steven Croft ‘s team reached their target with exactly five overs to spare, with the in-form Rob Jones making 85 not out, his second successive fifty and his best score in List A cricket. Worcestershire, by contrast, have now lost all four of their games and their chances of reaching the knockout stages of this competition are already remote.

In the afternoon’s first exchanges, Worcestershire openers, Azhar Ali and Taylor Cornall put on 48 for their side’s first wicket before Ali was caught at long leg by Jack Morley for 29 when he top-edged a pull off Danny Lamb. However, by that time Lancashire’s bowling options had been reduced by the shoulder injury suffered by Washington Sundar when making a diving stop at mid-on and Worcestershire’s hopes were further raised when Gareth Roderick settled in quickly and clipped Danny Lamb off his toes for a six into the latest Old Trafford building site.

Unfortunately for the visitors, Roderick was bowled via bat and boot by Morley for 30 and Lancashire struck another blow when Cornall, having reached his maiden half-century in county cricket off 79 balls without hitting a boundary, was bowled by Luke Wells for 58 when trying to cut a ball that spun past the angled bat.

That wicket left Worcestershire on 131 for three in the 30th over and ten minutes later Jake Libby was bowled off his pads by Lamb for 12. Ed Barnard became the third batsman to deflect the ball into his stumps when his attempted pull off Hurt caught only the bottom edge, but by that point Kashif Ali had smacked Wells for two leg-side fours and stroked Lamb deep into the stand at the Brian Statham End.

Ben Cox took his lead from Kashif’s strokeplay and the pair added 44 in less than seven overs only for Wells to remove both Cox for 24 and Joe Leach for a single in the space of seven balls. Those dismissals robbed the later stages of Worcestershire’s innings of some of its impetus but Kashif reached his fifty off 41 balls and was ninth out in the final over for 61 when he hit a Tom Bailey full toss straight to substitute fielder Jack Blatherwick at long off.

Wells, who took three for 42, was the most successful Lancashire bowler but their opponents’ 248 for nine looked a competitive total on a used pitch.

However, Lancashire’s openers did their best to make Worcestershire’s total look inadequate. Wells and George Balderson put on 76 in 11.4 overs before Wells drove Adam Finch to Leach at mid-off and departed with a 24-ball 49 to add to his three wickets

And once the former Sussex opener’s salvo had eased the required run-rate, Lancashire’s other top order settled for siege warfare, quietly scoring at around six runs an over, safe in the knowledge that such relatively gentle acquisition was all that was required.

The loss of wickets rarely slowed the run rate. Although Balderson was caught at cover off Libby for 35 and Steven Croft caught behind by Cox off Leach for 15, Lancashire reached the halfway point of their innings on 135 for three, well ahead of their requirement.

In Washington’s absence, Lancashire batting resources nevertheless looked a little thin but they were not called upon until Lancashire were within thirty runs of victory. When he had made 35 Bell gave Libby a second wicket when he skied a catch to short cover but Jones and George Lavelle took their side home.