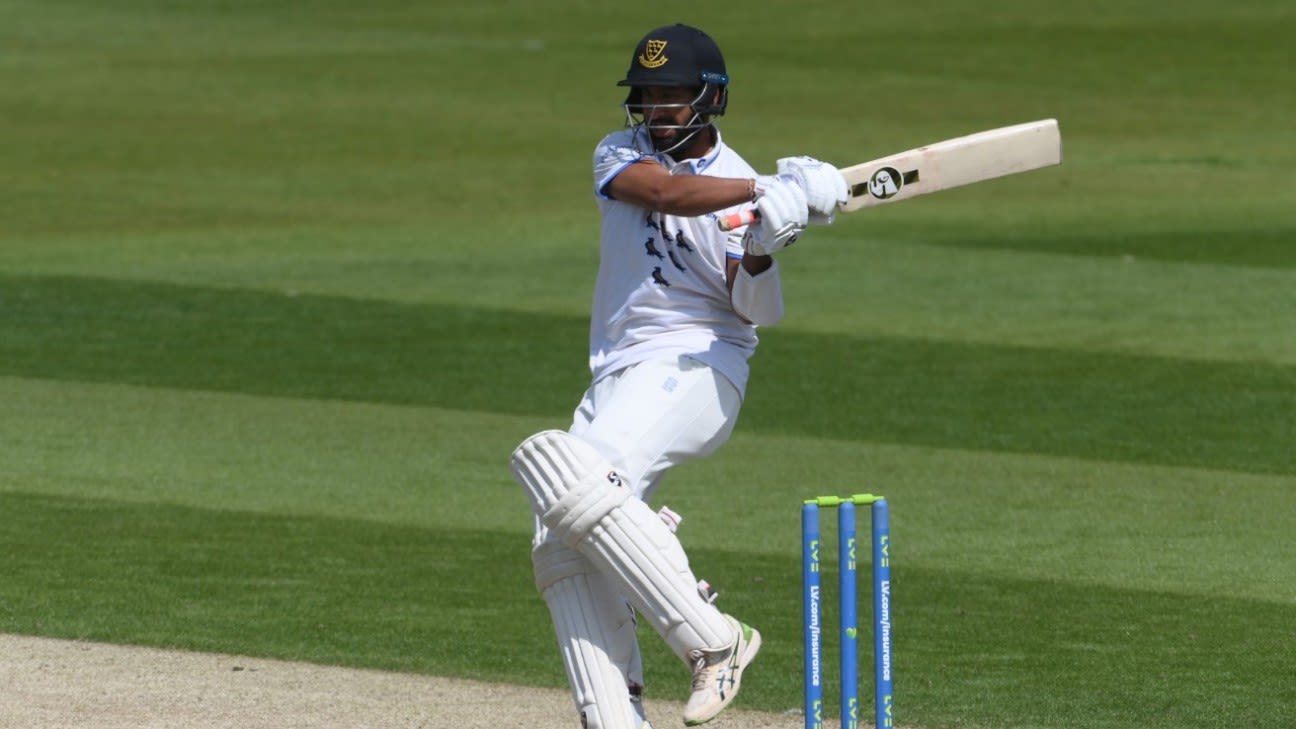 Cheteshwar Pujara and Tom Alsop posted centuries as Sussex capitalised on Middlesex’s baffling decision to bowl in 41-degree heat by reaching 328 for 4 at Lord’s.

Alsop, with 135, batted sensibly alongside Pujara – the India star registering his fifth LV= Insurance County Championship hundred of the season to close on 115 not out and put the visitors firmly in control.

Home skipper Tim Murtagh gambled on a greenish surface providing early assistance to the seamers – but that never materialised as his side toiled away in sweltering conditions with little success.

The Sussex pair accrued a third-wicket partnership of 219 before Tom Helm, who finished with 3 for 63, struck late on by dismissing Alsop and nightwatcher Archie Lenham in the space of four balls.

Middlesex handed a debut to Pieter Malan, finally available after untangling the red tape that had delayed the approval of his visa, but the South African’s first contribution was to fumble a cover drive from Tom Clark over the rope.

Murtagh, who did gain some intermittent swing during the opening hour, made the initial breakthrough with a straight delivery that pinned the in-form Ali Orr in front of his stumps for 7.

However, that was Middlesex’s solitary success prior to lunch, with Alsop looking confident on the front foot and taking advantage of the short boundary as he overtook his partner.

Helm switched to the Nursery End after the interval and immediately persuaded Alsop to edge to Sam Robson at second slip, only for a no-ball to be signalled.

The second-wicket pair went on to extend their alliance to 81, but Helm finally gained some reward for his perseverance as Clark (33) slashed outside off stump and this time Robson flung himself to his left to take a sharp one-handed catch.

That heralded the entrance of Pujara and, following a measured start, Sussex’s stand-in captain switched to attacking mode, advancing down the wicket to punch Luke Hollman to the midwicket boundary.

Having reached his half-century, Pujara brought up the 100 partnership by slamming Malan into the grandstand for the first six of the game as Sussex continued piling up runs without offering their tiring hosts a sniff of a chance.

Alsop was the first to three figures – his third ton of the campaign and second in as many games – before his partner followed suit, pushing Murtagh for a single immediately after the new ball had been taken.

Middlesex performed tidily enough with it, but rarely looked like finding a way through until Helm had Alsop caught behind off a rising delivery and then removed Lenham, with Robson holding on again in the slips.