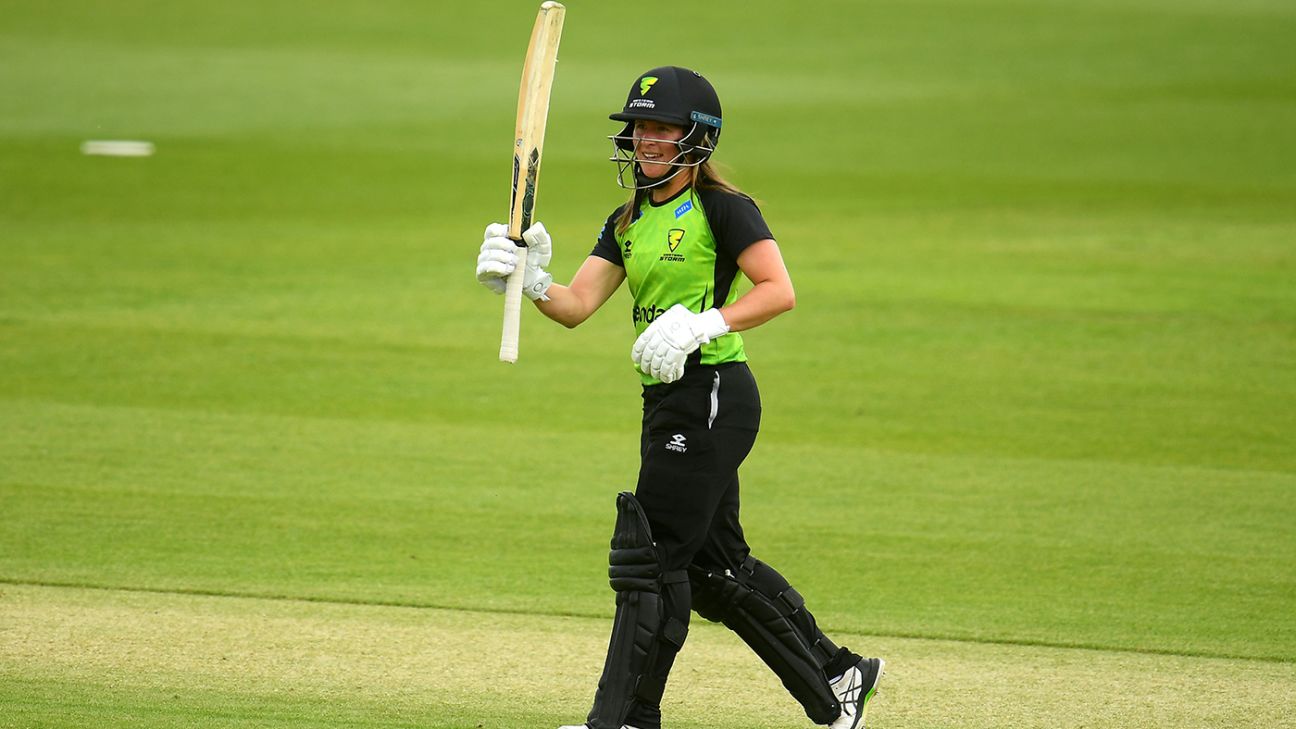 Sophie Luff and Katie George broke Sunrisers’ hearts as their stunning partnership carried Western Storm to a three-wicket win in the Rachael Heyhoe Flint Trophy at Chelmsford.
It looked for all the world as if the hosts would secure a first-ever win in the 50-over competition at the 16th attempt when half-centuries from Cordelia Griffith (74) and Grace Scrivens (69) carried them to 254 for 6 and they reduced Storm to 103 for 5 in reply.

But the visitors, who beat Sunrisers off the last ball in the Charlotte Edwards Cup earlier in the season at the same venue, snuffed out those dreams with a sixth-wicket stand of 125 in just 95 balls.

George was the catalyst with 74 from 43 balls, including a six and 13 fours while skipper Luff completed an unbeaten century with the winning hit with one over to spare.

Sunrisers were indebted to Griffith and Scrivens for laying a superb platform. The duo saw off the in-form Lauren Filer before Scrivens took successive boundaries off Danielle Gibson via a classic off-drive and a flick to long-leg. And with Griffith tucking into Gibson’s next over the 50 came up in 66 balls.

Both drove strongly, while Griffith, dropped at mid-wicket on 39 from the bowling of Fi Morris, employed some wristy cut shots.

Their fifties came up in the same over, Griffith’s from 84 deliveries and Scrivens 11 balls quicker thanks to eight boundaries.

At 140 for nought a huge score looked in the offing, but Filer returned to have Griffiths caught at cover and then Holland (2 for 32) took centre stage.

The youngster caught Naomi Dattani off the bowling of Morris before getting ball in hand to claim the prize scalp of Scrivens, who top-edged an attempted pull which Sophia Smale ran behind wicketkeeper Natasha Wraith to grab just above the turf.

Mady Villiers (33) briefly regained the initiative with some inventive stroke-play before Holland castled her too, and it needed a six in the final over from Joanne Gardner (29 not out) to carry Sunrisers beyond 250.

The host’s tally appeared light, but there was early reward in the field when Kate Coppack had Wraith snaffled at mid-wicket and Alex Griffiths too went cheaply caught at mid-off from the bowling of Villiers (3 for 33).

Scrivens was introduced after the powerplay, but it was spin-twin Abtaha Maqsood who made the next incision with the big wicket of former England star Fran Wilson who slashed a wide one to Mia Rogers at backward point.

Storm’s hopes now rested heavily on skipper Luff who clouted Maqsood back over her head to begin a counter-offensive.

Morris too took heavy toll of a full toss from Maqsood, but was given a life on 16 when Dattani couldn’t cling on to pull shot above her head.

But the run-rate kept climbing and pressure told when confusion in running saw both batters stranded mid-pitch, Morris the one to depart.

Scrivens finally gained reward for a Scrooge-like spell when Gibson slashed third last ball into the hands of Griffiths and Sunrisers had scent of that elusive win.

Luff though stood firm to reach 50 from 92 balls while George plundered 24 off one Gardner over as she raced to 50 in 25 balls with 11 fours.

With the momentum shifted, the pair sent the bowling to all parts to raise the 100-stand.

Villiers returned to york George and Kelly Castle removed Holland to threaten a final twist, but Luff had the last say to leave Sunrisers reflecting once more on what might have been.