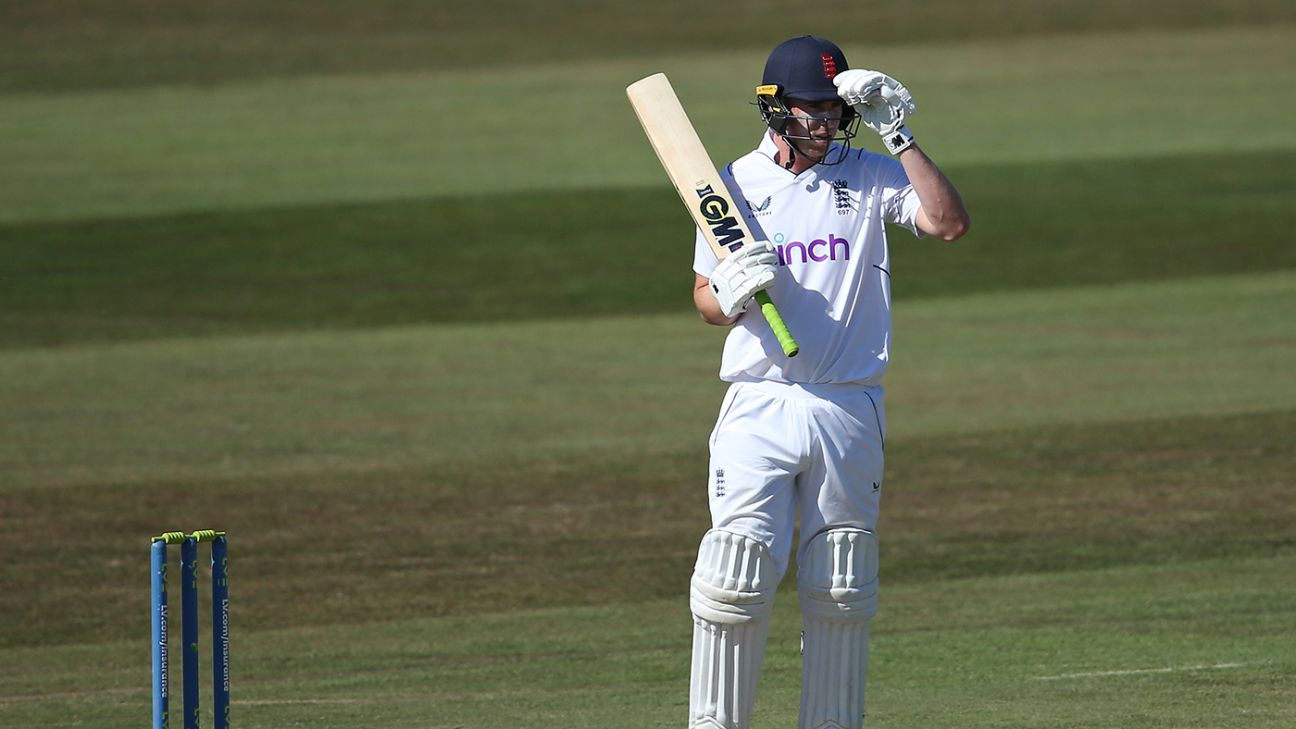 At the start of this week in Canterbury, the England Lions were given a briefing by Test coach Brendon McCullum and managing director of men’s cricket Rob Key. It wasn’t expressly to go out there against South Africa and attack throughout with the ball, even though they did to remove more or less the top five that will feature in the first Test at Lord’s for 129 on day two. Nor was it expressly for a positive approach with the bat, which came in response to the Proteas’ 433 as the hosts closed on 279 for 3 thanks to a resting run rate of 5.07 that had calmed down by the end of these 55 overs.
The message was, actually, to feel free to collar either McCullum or Key for a chat, to talk about anything, ranging from where they sit in the pecking order for higher honours or how they might tailor their games to fit in with the more expressive approach to red-ball cricket being preached. By the conclusion of this match on Friday, there’s a chance all of the XI will have had their turn to bend the ear of the management duo. Two days in, the ones to have caught the eye are Craig Overton, who took 5 for 74 in the first innings, and Dan Lawrence with a run-a-ball 97 that spoke as much of a message being received as a player tailor-made for this kind of cricket.

Lawrence’s presence at three was no coincidence. The consistency of a top six picked for the first four Tests of the summer still has a mix of certainties and dead certainties. And so, with the permanence of Joe Root, Jonny Bairstow and skipper Ben Stokes at four, five and six, first-drop, where Ollie Pope resides, is the most available and natural fit for the Essex batter to add to his 11 caps so far. Having already impressed Stokes with his approach, now was the time to get Brendon on side.

With a fast outfield, steady pitch and clear skies above, he showcased his typically classy yet uncompromising strokeplay: tidy drives down the ground, short-arm pulls off front and back foot, dabs into the off side. All occasionally garnished with those wrists to ensure the field was running about more than he was. He struck 17 fours, and 10 of those came in the 48 balls it took to move to 50.

Under the new management trio of Key, McCullum and Stokes, an average of 29 across 21 innings will not be used as a measure of Lawrence’s credentials. But importantly, the green shoots in that period, notably the three half-centuries, the last of which – 91 – coming during the West Indies tour, after which point he was cast aside – remain. The swagger has not diminished, nor the fearless spirit. And especially not the desire for responsibility at the highest level.

“I feel like I love the brand of cricket that they’re trying to play,” said Lawrence at the close. “And it’s something obviously I’d be desperate to be a part of. So yeah, trying to replicate it whenever I play and hopefully get back in.”

The absence of worry or nerves was evident beyond Lawrence, who was dropped on 89 by Duanne Olivier at backward square leg, before the same man nipped one away to remove him three short of a century, which the batter wasn’t too frustrated about. His departure brought in Ben Duckett (31 not out), who struck his first three balls from Olivier for four. At the other end was Harry Brook, who struck two sixes in his 64 so far: one to get off the mark, the other to take him to a half-century from 65 deliveries.

“I think it’s just trying to get rid of the fear of failure,” said Lawrence on the talk from above and the trickle-down attitude from Test level. Going out there and just enjoying it and trying to be as free as possible and I feel like all of us went out there and did that today. We all tried to express ourselves as much as we could and it was good fun.”

The morning was something of a box-ticking exercise. Overton completed a third five-wicket haul of the red ball summer when Keshav Maharaj gloved a short delivery to Keaton Jennings at first slip. Sam Cook got the one in the wicket-column his work deserved removing Khaya Zondo for his overnight score of 86. The right-hander, having shown strong judgement on Tuesday, came unstuck 11 balls into Wednesday, leaving a delivery from the Essex seamer that clattered into off-stump.

South Africa then bumped up their total with stands of 31, 54 and 65 for the final three wickets, respectively. A composed 62 from wicketkeeper Kyle Verreynne and a blitzing 54 from six-foot-eight allrounder Marco Jansen – eight boundaries, five of them sixes – were the key contributions to the 151 added in the opening session.

Then came the real business for the Proteas. There is a degree of uncertainty to the identity of their attack. The first-choice trio of Kagiso Rabada, Lungi Ngidi and Anrich Nortje are sitting out this week, although Rabada was in the outfield at lunch on day one to bowl on a practice strip. Having sat out the decider of the Twenty20 series with England because of an ankle injury, this was clearly an opportunity to gauge where he was at. He looked far from comfortable, taking ample breaks between each delivery, all under the guidance of bowling coach Charl Langeveldt. As such, the onus was on those playing to pitch themselves as the best alternate, which proved tricky under clear skies, on a track that wasn’t doing too much off the straight, and a dry outfield.

Olivier was the pick of the bowlers, taking two wickets – for 39 from his 10 overs – with the only two deliveries from the quicks that coaxed genuine misjudgements. Keaton Jennings (27) was drawn into a slightly angled back to a straight delivery that nipped away and carried to Jansen at gully. A slightly shorter ball, with nip the other way, did for Lawrence.

Sandwiched in between was Dom Sibley misreading an arm-ball from Maharaj, ending an engaging 48 from 62, by which point the former Test openers had set up a platform of 144 between them.

By the time Lawrence had departed, ending the third-wicket partnership with Brook on 79, 223 was on the board, and it swelled by 56 in the 71 deliveries remaining up to stumps. Brook (form) and Duckett (recognition) have their own personal agendas going into day three of this fixture through a more holistic approach from the top-down.