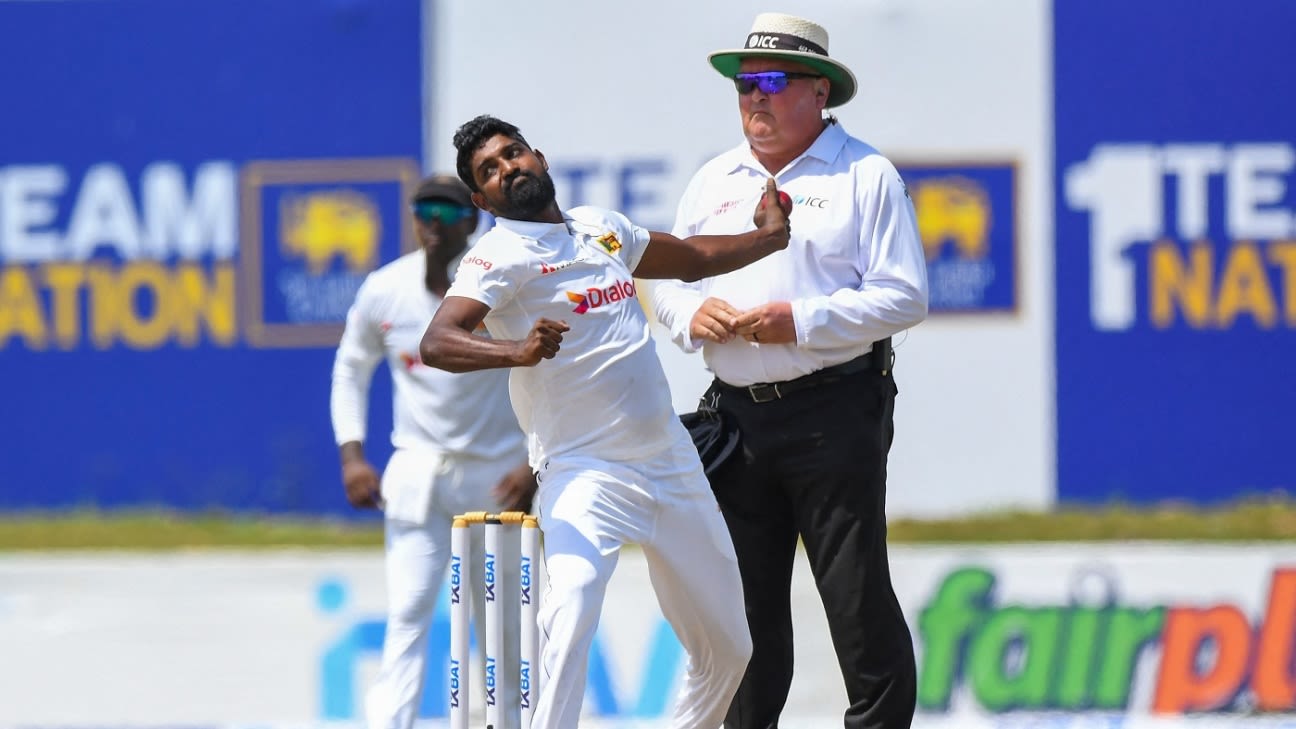 Prabath Jayasuriya terrorised Pakistan’s middle order on the second morning in Galle, claiming four wickets for 39 runs, as he bowled unchanged from the fort end.
By lunch, Pakistan were in disarray. They still had a watchful Babar Azam at the crease, but had sunk to 104 for 7 in response to Sri Lanka’s 222. Had Sri Lanka held all their catches, the visitors would have been in even worse trouble on a surface that was taking huge turn, and is likely to be incredibly difficult to negotiate in the fourth innings.

Jayasuriya’s dominance began with his first ball of the morning, which hung in the air, and in turn had Azhar Ali chipping it to cover. Dimuth Karunaratne dropped that catch diving forward, but it would hardly matter. Two balls later, the left-arm spinner snuck in the straighter delivery, and had Azhar plumb in front of the stumps.

Pakistan then put on their best stand of the session, Mohammad Rizwan joining Babar, and using the sweep in particular to moderate effect. Still, almost every over that Jayasuriya bowled, there were deliveries that spun past the outside edge.

Rizwan, who hit three fours in his 19, was the only batter not to fall to Jayasuriya this session. He went back to flick a big-turning Ramesh Mendis offbreak around the corner, but ended up only giving a faint edge to Niroshan Dickwella, who took an excellent legside catch.

From there, the wickets came quickly for Jayasuriya. He got Agha Salman lbw roughly halfway through the session – the debutant having never looked comfortable in his 15-ball stay. A few overs later, Mohammad Nawaz came down the track and whipped Jayasuriya straight into the chest of short leg Oshada Fernando, who clung to the chance. Next ball, Shaheen Afridi played back to a delivery that turned at him from outside off, and was struck on the pads in front of the stumps.

With 5 for 41 to his name now, Jayasuriya has completed three five-wicket hauls in his three bowling innings in Tests so far (he’d taken six in each innings on debut against Australia).

Babar was 34 off 72 at the break, prospering by playing the line of the ball, and keeping the straight ones out. He had Yasir Shah for company. Yasir had been dropped at short leg off the last ball of the session.