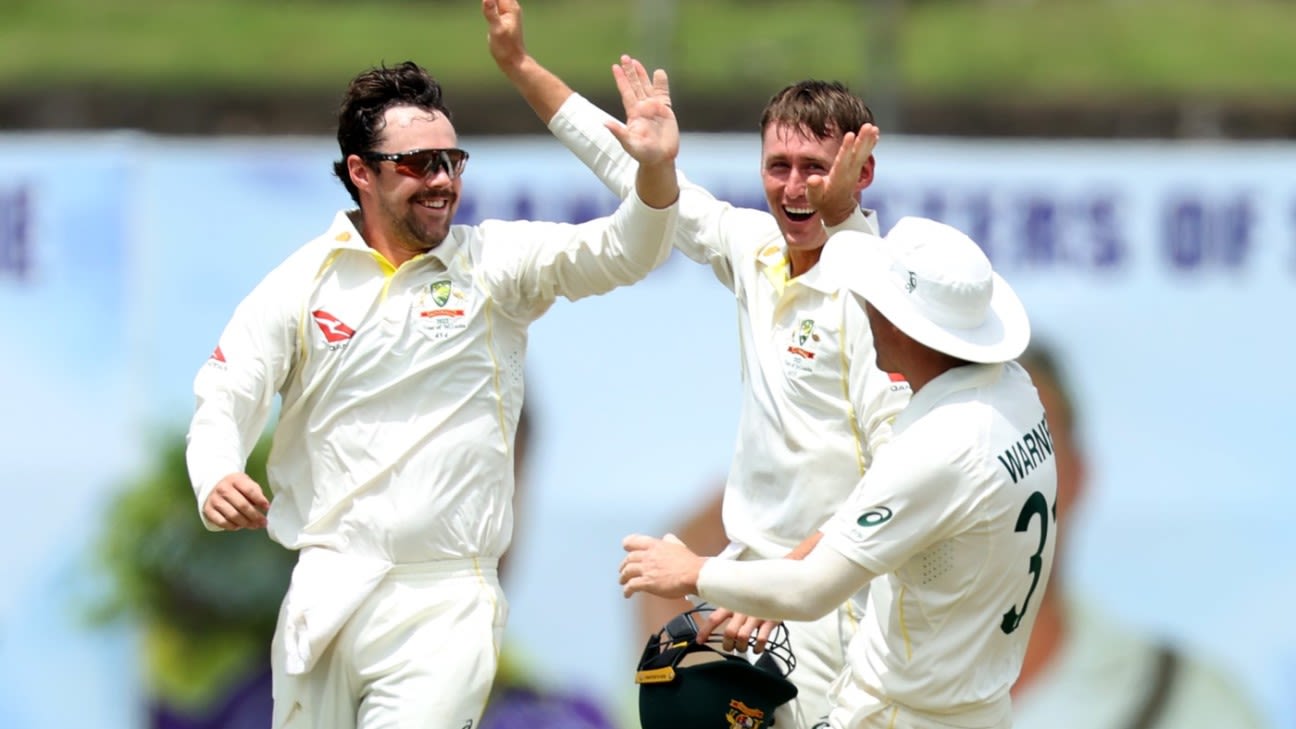 Australia’s spinners tore through Sri Lanka’s line-up as they lost 10 wickets inside 23 overs in a staggering collapse to lose the opening Test in Galle inside two-and-a-half days.

Nathan Lyon and Travis Head took four wickets each and Mitchell Swepson two, as Sri Lanka were bundled out for 113. Australia needed just five runs to win and knocked them off with ease to win by 10 wickets before lunch on the third day and go 1-0 up in the series.

Lyon finished with nine wickets for the match and marched into the all-time top 10 Test wickets-takers, while Head took stunning career-best first-class and Test figures of 4 for 10. Such was the spinners’ dominance, captain Pat Cummins did not bowl a ball in Sri Lanka’s second innings. Despite Lyon’s performance, Cameron Green was named Player of the Match for his vital 77 on day two on a difficult batting surface.

Sri Lanka’s batting was reckless and hapless as they tried to follow Australia’s first innings approach of positivity and decisive strokeplay. But the decision-making and execution was flawed on a surface that spun more and more by the minute throughout a crazy two hours of cricket.

Sri Lanka were without their most experienced and in-form batter Angelo Mathews after he was ruled out of the Test having tested positive for Covid-19 last night. Mathews took a rapid test after feeling unwell and the positive result meant he was withdrawn from the game on the third morning and replaced by Oshada Fernando.

Sri Lanka did make the perfect start to the day with the ball, bowling Australia out for 321 in the second over of the morning. Asitha Fernando ripped through Cummins and Swepson with two superb reverse swinging yorkers at 137kph. Asitha benefitted from a ball change after Sri Lanka’s original ball was pocketed by a spectator last night when Cummins hit Jeffrey Vandersay out of the ground off the last ball of the second day.

Mitchell Swepson was soon among the wickets•Getty Images

They made a rapid start to their second innings taking 17 runs off Mitchell Starc’s opening over. It was the most expensive opening over in Test cricket in the last 10 years as Starc’s radar went awry to gift Pathum Nissanka and Dimuth Karunaratne four boundaries between them. Starc’s spell lasted two overs and cost 23. Lyon opened the bowling from the other end and bowled unchanged while Swepson came on in the fifth over.

Sri Lanka’s batters tried to continue their positive approach but it bordered on reckless as they lost wickets at regular intervals and offered numerous other chances. Lyon picked up Karunaratne for the second time in the match as the left-hander tried to sweep the wrong length. His thin under edge was expertly held by keeper Alex Carey.

Nissanka also fell trying to sweep, trapped lbw to Swepson as a legbreak skidded on straight and hit him on the back leg infront of off.

Kusal Mendis and Oshada tried to maintain the aggression. Mendis slapped a powerful slog sweep to get off the mark while Oshada launched Swepson straight down the ground for six. But they failed to pick their moments to attack. Both men were missed at leg slip off Lyon with Warner unable to clutch two very tough chances in three balls. But it mattered little. Mendis fell sweeping to the wrong length. Some extra bounce caused a top edge that carried to a very well-placed Swepson three-quarters of the way to the fine-leg rope.

Oshada continued to ride his luck miscuing balls in the air short of fielders before driving hard at a Swepson legbreak out of the rough outside off and nicking it to slip.

Dhananjaya de Silva was fortunate to survive a stumping chance after running randomly at Lyon and being beaten through the gate, with Carey unable to glove it. Cummins then made the bold move to swap Swepson for the part-time offspin of Head against the two right-handers.

It paid a handsome dividend with Head striking twice in his first over. He ripped a classic offbreak out of the rough and through the flawed defence of Dinesh Chandimal to crash into middle and leg. Three balls later Dhananjaya staggeringly shouldered arms to a ball also spinning into middle and leg thinking it might turn down the leg side. The only thing more shocking than the leave was Kumar Dharmasena’s decision to give it not out. Australia had no hesitation in reviewing successfully.

Ramesh Mendis fell the same way as Kusal, top edging a poorly executed sweep to fine leg. Niroshan Dickwella tried to continue his reverse-sweeping deeds of the first innings only to find cover point with Marnus Labuschagne taking an outstanding catch diving to his left.

Head picked up two more in his third over. He ripped another stunning offbreak from the rough through Vandersay’s defence to hit the top of leg. Lasith Embuldeniya was the last out, trapped plumb lbw, but again a review was needed to overturn Dharmasena’s not out decision.

David Warner finished it in four balls with two blows, one a reverse sweep over short third, and then a six over wide long on.

Alex Malcolm is an Associate Editor at ESPNcricinfo