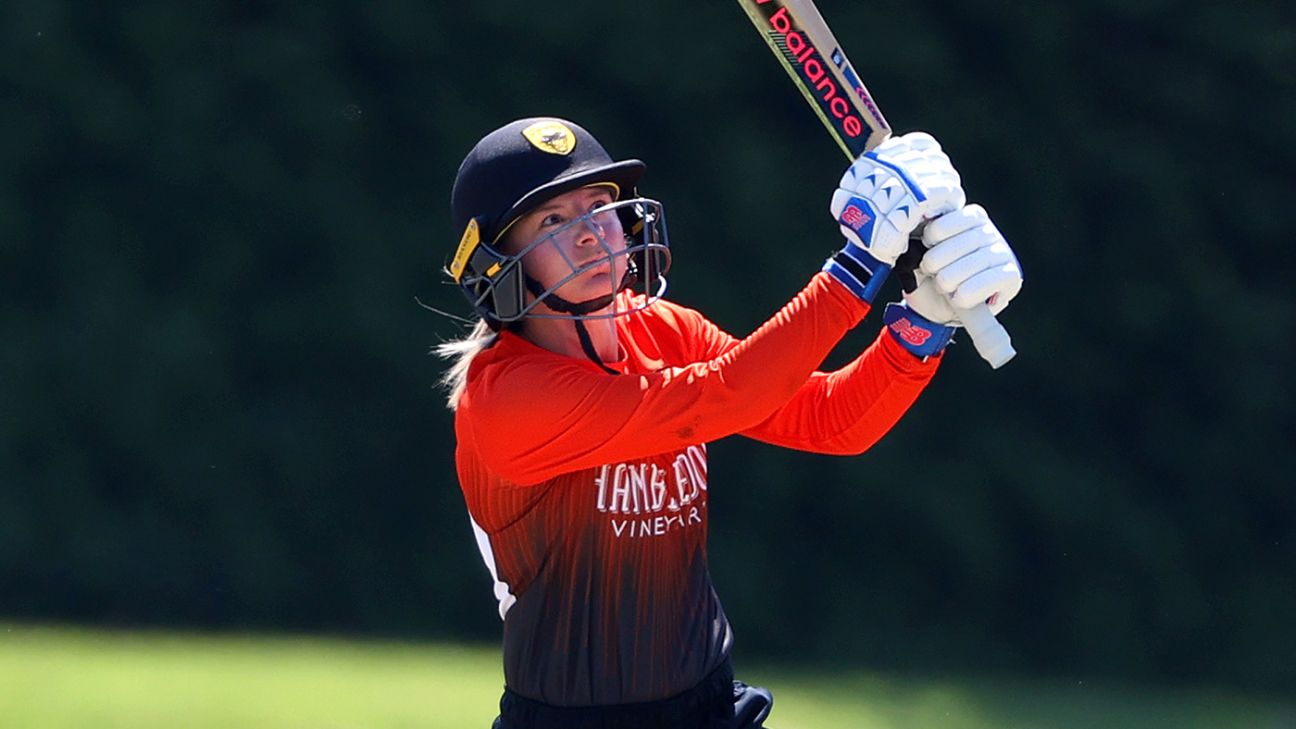 Southern Vipers defeated Central Sparks by seven wickets on Duckworth-Lewis-Stern in a heavily rain-affected Rachael Heyhoe Flint Trophy opener at Portland Road. After frequent interruptions by the weather, Vipers chased down a revised DLS target of 70 in ten overs as they reached 75 for 3 with just two balls to spare.

On a relentlessly damp afternoon in Birmingham, calculators were to the fore as both innings were truncated by heavy showers.

Sparks batted first and closed on 163 for 7 from 36 overs – an innings of two halves after they reached 103 for 3 from 24 before a two-hour rain break. They resumed with 12 more overs to have a thrash but added just 60 more against disciplined bowling led by Georgia Elwiss (8-0-29-1).

Chasing an initial target of 176 from 36, Vipers were 24 for 1 when rain returned. That trimmed the target to 70 from ten and Danni Wyatt paced the chase to perfection with an unbeaten 36 from 24 balls.

Put in, Sparks, depleted by the absence of Emily Arlott, still recovering from Covid, and recent England debutant Issy Wong, were given a solid platform by openers Eve Jones and Davina Perrin who added 65 in 17 overs. Fifteen-year-old Perrin, a Staffordshire product, impressed for 22 from 48 balls before lifting Charlotte Taylor to mid-on.

Paige Schofield soon had Thea Brookes caught behind before Jones’s promising innings of 39 ended in wasteful fashion when Ami Campbell called for a second run and Jones’ desperate dive for home narrowly failed. Three balls later the rain arrived and, after the resumption, Vipers bowled accurately to deny Sparks the boundaries they needed to beef up their total. #

Vipers’ reply suffered an early blow when Georgia Adams was trapped lbw by the third ball of the innings, from Grace Potts. Wyatt was quickly into her stride, striking three boundaries despite the wet outfield before rain returned at 24 for 1 after three.

The final chapter of a complex plot saw Vipers resume at 5.20pm needing another 46 from seven overs. Wyatt and Maia Boucher added a measured 62 from 47 balls and though Boucher fell lbw to Sarah Glenn in the penultimate over, Vipers needed just five from the last, from Hannah Baker.

A handsome straight four from 17-year-old Freya Kemp from the second ball relieved the pressure. Kemp was bowled by the next but Elwiss settled the match by lifting her first ball for a huge six.