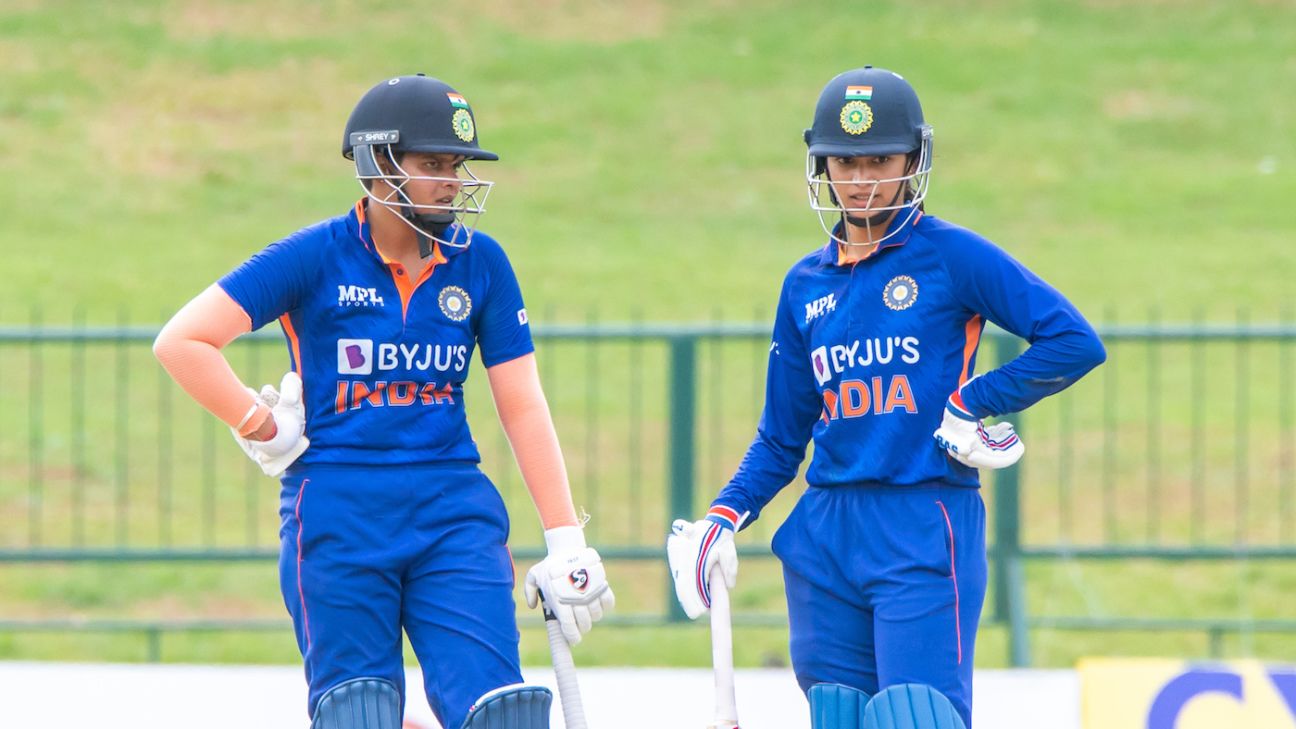 A career-best four-wicket burst from Renuka Singh followed by clinical half-centuries from Smriti Mandhana and Shafali Verma helped India dominate the second ODI for a 10-wicket win and gain an unassailable 2-0 lead in the three-match series.
Chasing 174, India made sure they learnt their lessons from their first outing when they scrapped home to a four-wicket victory chasing 172. Mandhana and Shafali looked much assured with their strokes as the duo piled on an unbeaten 174-run stand to see India through with 24.2 overs to spare. While Mandhana finished on 94 not out off 83 balls, Shafali remained unbeaten on career-best and run-a-ball 71.

It had rained heavily in Palleleke on the eve of the game but the weather cleared for an on-time start. Expecting the surface to offer something for the quick bowlers early, Harmanpreet Kaur’s decision to bowl was vindicated with Renuka finding her lengths from the get-go. She rattled the Sri Lanka top order with three quick strikes and eventually finished with a career-best 4 for 28, improving on her three-wicket haul from the opening ODI.

She started by breaching Hasini Perera’s defences off just the fourth ball of the innings, to remove her for a duck. The fast bowler then sent back 16-year-old debutant Vishmi Gunaratne, who took 14 balls for her three runs, before trapping Harshitha Samarawickrama lbw for a three-ball duck as Sri Lanka were reduced to 11 for 3 inside seven overs.

Chamari Athapaththu, who for a change came in at No. 3, then provided some solidity to the innings. She had a slice of luck when on 3 she edged a full delivery to slip. There was a bit of confusion about whether or not it was a bump ball, and eventually, the third umpire upheld the on-field umpire’s soft signal of not out.

Athapaththu soon opened up her shoulders, thrashing Pooja Vastrakar along the ground through the covers and then lofting Renuka over the same region. However, her luck soon ran out when she flicked a harmless Meghna Singh half-volley on the pads straight to Shafali at deep fine leg for 27.

Vastrakar and Co adopted the short-ball policy and had the batters ducking and swaying for cover. Anushka Sanjeewani and Nilakshi de Silva held fort for a bit before Sanjeewani squeezed out a full-length delivery from Deepti Sharma to the on side and went about wandering carelessly. Wicketkeeper Yastika Bhatia was quick to spot the opportunity and sprung across to flick the ball back onto the stumps, catching the batter short with the bat in the air.

Another needless run out sent back Kavisha Dilhari as Sri Lanka slipped to 81 for 6 in the 25th over. Ama Kanchana and de Silva did stage some sort of a comeback adding 42 runs for the seventh wicket but they still found run-scoring tough. Deepti’s two wickets off the last two balls of the innings made sure the hosts were bowled out.

Kanchana finished as Sri Lanka’s top-scorer with an unbeaten 47 off 83 balls while de Silva scored 32 off 62. In all, Sri Lanka hit just 11 fours and faced 191 dot balls. Two run outs too, did not help their cause.

India, in stark contrast, faced just 55 dot balls and hit 15 fours and two sixes. Both Mandhana and Shafali were watchful initially but made sure they rotated the strike while collecting the odd boundaries. Mandhana got going with a couple of fours off Inoka Ranaweera before Shafali too got into the act by thumping Achini Kulasuriya over her head.

The duo reached the 50-run mark in the ninth over and thereon collected a boundary nearly every over. In between, Sri Lanka gave two lives each to both openers. Shafali was dropped on 39 when she chipped a simple chance to long-on, and then again on 55 at deep midwicket. Mandhana was given a chance soon after she raised her 23rd ODI fifty by Ranaweera off her own bowling and then again on 77.

Once both batters reached their fifties, they took the Sri Lanka attack to the cleaners. Mandhana even had a shot at completing her century when she smashed a six to go to 94 with India needing three to win. But a wide down the leg side from Kanchana spoiled her hopes of reaching the landmark. It was Shafali who sealed the win with a single to cover.

Renuka was named the Player of the Match. The win also saw India move up on the Women’s Championship points table to second place with four points, behind South Africa, while Sri Lanka are on fourth position with just two points from five games.

Ashish Pant is a sub-editor with ESPNcricinfo