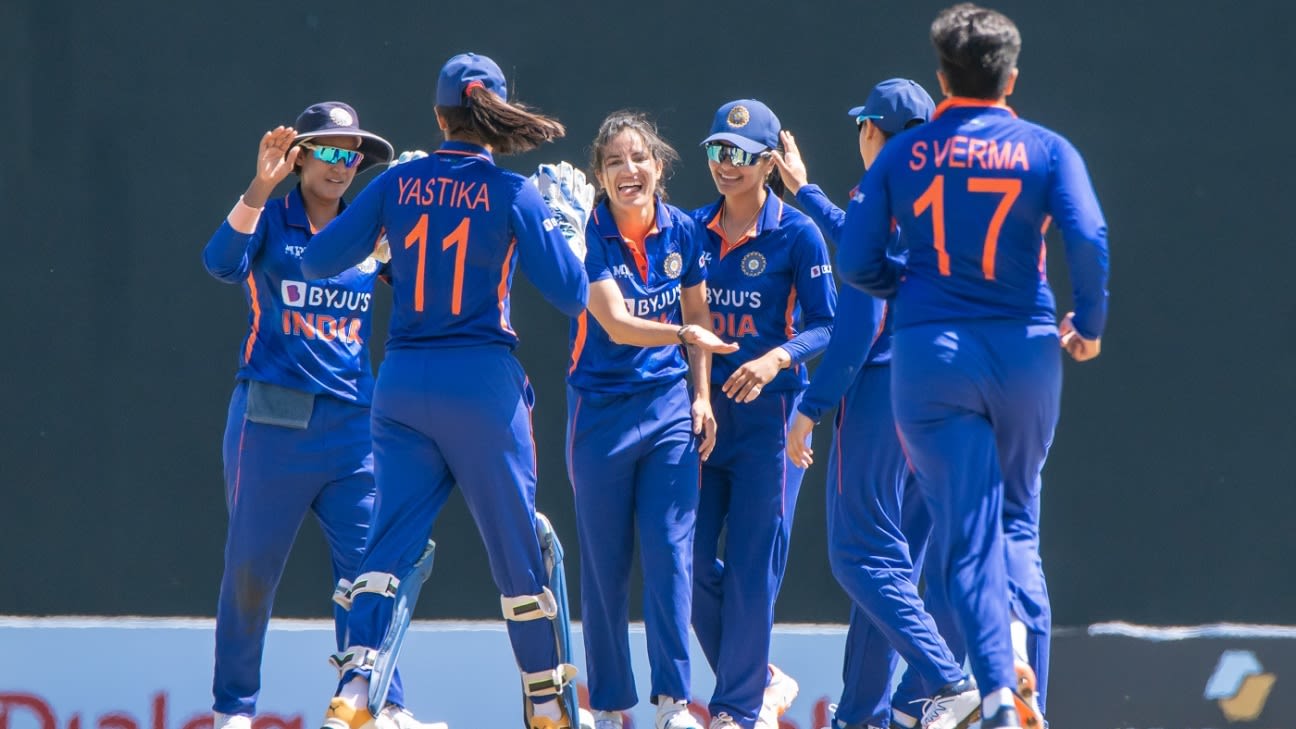 India beat Sri Lanka in the opening ODI of the three-match series in Pallekele, but not before a scare. Sri Lanka offspinner Oshadi Ranasinghe took two early wickets, left-arm spinner Inoka Ranaweera took 4 for 39 through the middle overs, and for a brief period, it seemed that Sri Lanka would successfully defend 171.

However, their below-par total meant India’s struggling batting line-up could creep up and register a four-wicket win, bringing relief to a unit that would have wanted to chase it down with ease at the halfway mark.

For India, the difference between victory and defeat was the 62-run fourth-wicket partnership between captain Harmanpreet Kaur and Harleen Deol. Their partnership, which came at a run rate of 6.2, ensured that not only were runs added on a deteriorating surface, but they came quickly.

Deol, in particular, was aggressive in her approach despite the field being spread out, and in her first ODI since her debut in February 2019, she made 34 in 40 balls. Harmanpreet was more watchful, scoring only three boundaries in her 44, and opted to pierce the gaps and push her partner for the extra run when on offer. The duo followed the template set by Shafali Verma in her 40-ball 35 up top, but the three quick top-order wickets and then the Ranaweera burst in the middle overs meant the final hour of the game was full of nerves.

But Deepti Sharma ensured she stayed till the end to shepherd the chase through. Coming in at No. 6, and high on confidence from her three-wicket haul in the first innings, Deepti put on an unbeaten 38-run stand with Pooja Vastrakar for the seventh wicket to seal the win with 72 balls to spare. Deepti made 22 off 41 balls, while Vastrakar ended the game with a six to finish on 21 off 19.
Deepti was one of two stars with the ball for India. Renuka Singh also picked up a three-wicket haul to bowl out Sri Lanka for 171. Deepti feasted through the middle overs of the first innings, making full use of the big turn on offer, dismissing Hansima Karunaratne for a duck and Hasini Perera for 37. Deepti took the final Sri Lankan wicket too, leaving the hosts with ten deliveries unused.
But, arguably, it was Renuka’s early strike that made the biggest difference in Sri Lanka’s chances of searching for the win after choosing to bat. She got the big wicket of Sri Lanka’s star batter and captain Chamari Athapaththu in the third over of the morning, and later closed her day out with two late wickets of Nilakshi de Silva and Ranasinghe with two slower balls.

Opener Hasini, the third wicket to fall in the morning, was the early aggressor in Sri Lanka’s powerplay and didn’t rein herself in despite the early wicket of Athapaththu. She struck five fours in her innings, and was the second-highest scorer for Sri Lanka. Nilakshi, who top-scored with 43, hung in as Sri Lanka’s middle order tried to rebuild but fell late in the innings to Renuka’s off-pace full ball.

Sri Lanka had a few partnerships bubbling through the innings, but none that would help them dominate a significant portion of the innings. Out of the first five stands, three crossed the double digits but ended before the 20-run mark. The highest partnership of the innings came for the sixth wicket with Nilakshi and wicketkeeper Anushka Sanjeewani (18) adding 47 runs off 91 balls. Sri Lanka lost their last five wickets in 40 runs.

India used eight bowlers in all, with part-timer Shafali also getting a bowl. Harmanpreet’s use of herself was the most impressive; she just 13 runs in seven overs and picked up a wicket. Even though Meghna Singh could not get a scalp in her eight overs, her economy of 2.87 was a positive takeaway for India. And thus began a new era for India in a post-Mithali Raj world, with a victory in their first match of the latest ICC Women’s Championship cycle.