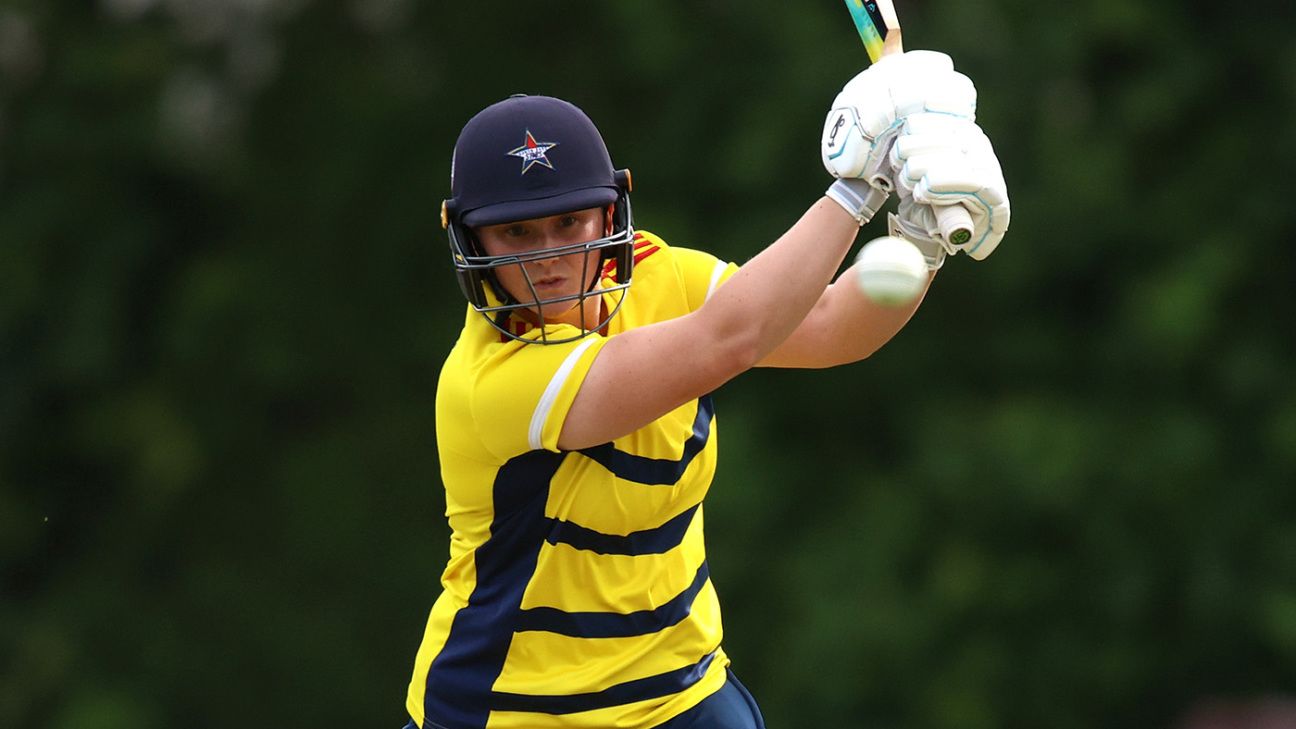 Bryony Smith’s majestic 114 set South East Stars up with a home Play-off clash with Southern Vipers and condemned Lightning to a limp farewell from the regional structure.

Ryana Macdonald-Gay‘s half-century backed up her captain to pile on 281 at the Uptonsteel County Ground in Leicester, which proved 112 runs too many despite Georgie Boyce scoring 60 on her second appearance since joining from Thunder.

Stars will host Vipers at The County Ground, Beckenham on Wednesday, with the winners facing Diamonds at Lord’s on Sunday, September 25.

Lightning lost the toss and were asked to field first in their last game as a Loughborough-based region, before moving to Nottinghamshire next year, but started their goodbye strongly as Grace Ballinger bowled Chloe Brewer with an in-swinger.

That brought Smith to the crease, and despite four dots to start, destruction wasn’t far away.

She never veered too far away from going at a run-a-ball throughout, helped by some luscious early driving, but streaked ahead with four consecutive boundaries off Ballinger to motor into the 40s.

Her fourth time past 50 in the Rachael Heyhoe Flint Trophy came in 47, but it only took her a further 39 deliveries to become the competition’s 14th centurion in three seasons – and the second fastest to the landmark.

Smith’s timing and picking up on poor legside balls were the foundation of the phenomenal innings but so too was her ability to dominate partnerships despite wickets falling regularly. She put on 40 with Kira Chathli, 66 with Jemima Spence (of which Smith scored 45) and 51 with Rhianna Southby.

When she departed for 114, having smashed straight at mid-off to end a blistering innings packed with 17 fours and a six over long-on, it felt inevitable that Stars would slump in her wake.

But 196 for seven was revived to 267 for eight after a low-risk, high-reward stand between Macdonald-Gay and Alexa Stonehouse. The former wristily found gaps to bring up a maiden List A half-century in 56 balls.

It helped Stars end up on a well-above-par 281, although Ballinger’s three for 62 belied her impressive first five overs, while Kirstie Gordon was exemplary with two for 38.

Franklin demolished the Lightning top order by bowling Marie Kelly via a chop on, running out Beth Harmer with a direct hit from square leg, and had Michaela Kirk leg before.

Lucy Higham was struck in front by Eva Gray to leave Lightning in a heap on 54 for four, but Boyce showcased her impressive skills in a 76-run stand with the increasingly impressive Ella Claridge.

The pair got their side back towards a manageable rate, with Boyce collecting a 60-ball fifty. But wicketkeeper Claridge fell for 35 and Boyce 70 within three overs of each other to stunt the hosts again, before the bottom fell out.

Macdonald-Gay continued her fine day by bowling Boyce and Sophie Munro, Gray picked up her second and third when Thresa Graves was astonishingly caught at backward point by Southby and Josie Groves tickled behind. Dani Gregory picked up the last wicket of Ballinger with 70 balls to spare.