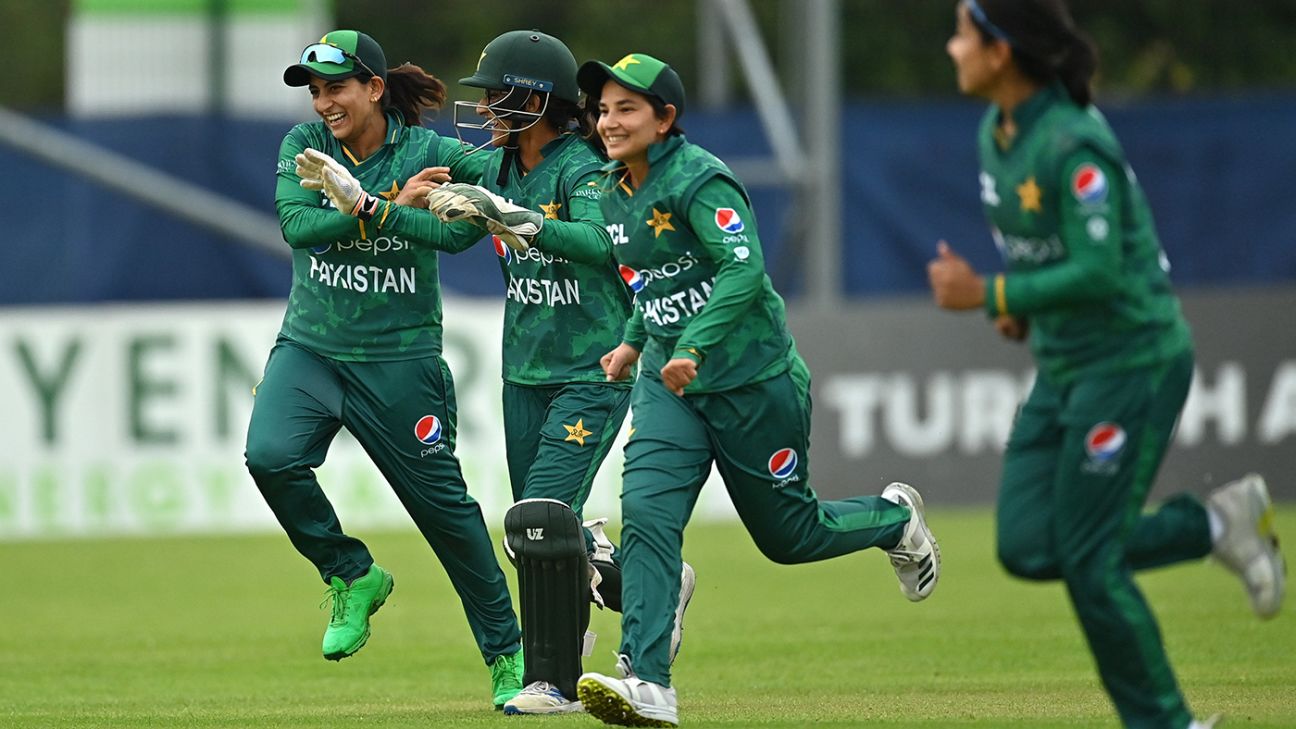 An excellent combined Pakistan bowling effort through the middle overs stifled Ireland and sealed victory by 13 runs in their rain-hit T20I, which was reduced to 14 overs per side at Bready.

Player of the Match Nida Dar set Pakistan up with a quick-fire 26 off 15 balls after Muneeba Ali had compiled a 24-ball 29 either side of an interruption after the rain that had delayed the start returned five overs in.
Dar was also instrumental in containing Ireland after the hosts had enjoyed a promising four-over powerplay, as she, Tuba Hassan and Fatima Sana took one wicket apiece.
Sana and Anam Amin were miserly over the last two overs which saw three run outs and an lbw in favour of Sana as Ireland’s task of chasing down the 23 runs still needed proved insurmountable.
That came down largely to Hassan, Sana and Amin putting the clamp on Ireland through the middle overs after top-scorer Gaby Lewis and Rebecca Stokell reached 34 without loss after four overs.

Hassan broke through when she bowled Stokell for 19 with one that skidded onto off stump. Lewis and Orla Prendergast managed just nine runs off the ensuing three overs before Dar had Prendergast caught by Iram Javed off a top edge behind point.

Hassan and Amin combined to run out Laura Delaney, attempting a second after she had driven Amin to sweeper cover, Hassan firing the ball back into the bowler to great effect and Amin conceded just four runs off the over.

Lewis had started brightly with 15 off just seven balls including back-to-back fours, pulled and swept off Amin in just the second over of Ireland’s reply. She dealt Kainat Imtiaz similar treatment through the off side in the seventh to reach 32 off 20 deliveries but from there the going got tougher.

Lewis eventually fell for 47 off 41, run out in the final over, cutting Sana towards Dar, who collected and threw back to Sana at the batter’s end as Lewis came back for a second run.

Two dot balls from Sana followed before she trapped Mary Waldron lbw and then Arlene Kelly was run out by yet another sharp throw in from Dar to the keeper.

Pakistan won the toss and elected to bat, resuming on 34 for 1 after Ava Canning bowled Iram Javed on the first legitimate ball of the match, having sent down a leg-side wide to begin with.

Delaney bowled Ali shortly after the restart with a full, straight delivery that pegged back off stump as Ali tried to swipe across the line to make it 43 for 2. Delaney struck again in her next over, bowling Bismah Maroof with one that skidded on and clattered into middle and off for 13.

Dar and Ayesha Naseem put on 40 runs for the fourth wicket in the next four overs, Naseem striking Delaney for six over long off and Dar launching Jane Maguire over the midwicket fence.

But Maguire accounted for both within moments of Dar’s maxium, bowling her with a slower ball before she had Naseem caught by Kelly at long on two balls later to finish with 2 for 14 from three overs.

Ireland next face Australia on Thursday after their first match ended in a resounding nine-wicket win to the visitors.

Delaney, the Ireland captain, said her side would “look to push the boundaries in the middle period” going forward.

“So we’ll go back, we’ll regroup again tomorrow with training. We play against Australia then on Thursday which we know again will be a really good contest but we’re just happy to be playing good cricket against competitive sides.”