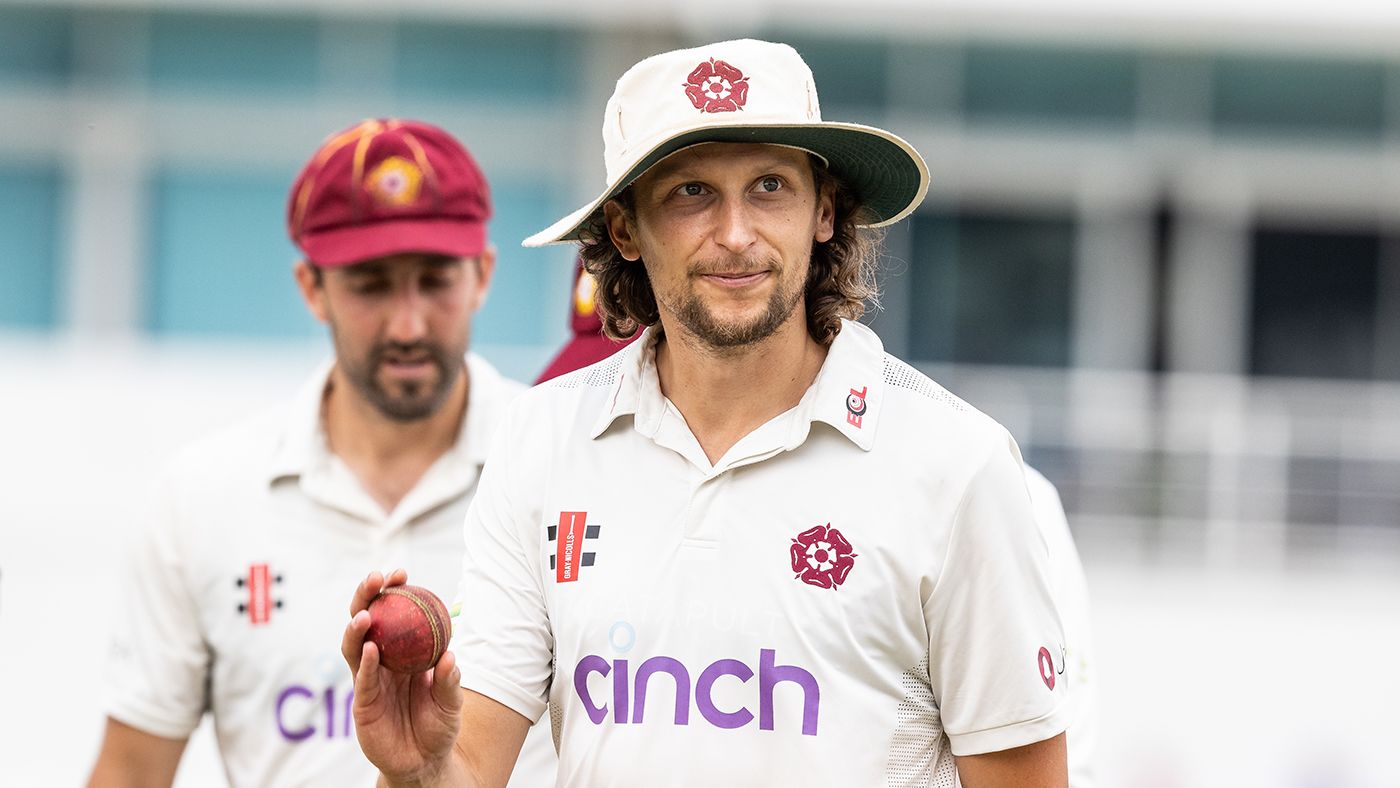 Northamptonshire seamer Jack White claimed his maiden five-wicket haul for just 14 runs as Lancashire were skittled for 132 on day two of this LV= County Championship match at Northampton.

White, 30, had a late introduction to professional cricket, making his first-class debut in 2020 after coming through the Minor Counties system in Cumbria and Cumberland. He caught the eye of former Steelbacks assistant coach Phil Rowe during a highly successful season playing grade cricket in New South Wales in 2017-18 which led to a contract at Wantage Road.

Making the most of the opportunity of his run in the Championship side this season, he set the tone against Lancashire, striking in the second over of the innings and running through their dangerous top order in 13 overs of attacking, disciplined bowling. He benefited too from humid, overcast conditions as Lancashire lost five wickets for 27 runs either side of lunch. Josh Bohannon top scored with 31.

Northamptonshire took a first-innings lead of 103 and by close of play had reached 25 for one in their second dig before bad light and rain stopped play.

In the morning, Lancashire made short work of picking up the last three Northamptonshire wickets for the addition of just 17 runs. Washington Sundar celebrated a five-fer on debut when he had Lewis McManus caught at deep midwicket for 61. Meanwhile Luke Wood knocked over White’s stumps and dismissed Simon Kerrigan thanks to a sensational diving catch by Rob Jones who ran across from short leg to take the ball behind the stumps..

When Lancashire batted, Northamptonshire’s seamers found plenty of movement through the air and off the pitch. White had early reward for his work, getting the ball to jag back and trap Luke Wells lbw playing back in his crease.

Keaton Jennings rode his luck early, playing and missing against the seaming ball and edging through the slips for four. He gradually opened up his scoring options, playing some pleasant drives and greeted the introduction of Kerrigan just before lunch by flicking a full toss away for four. He fell next ball though, caught at slip, as he pushed at a wide delivery outside off-stump.

White was back in the wickets column immediately after lunch when Croft was adjudged leg before and added a third scalp when Jones chopped on attempting to cut.

Bohannon was circumspect early in his innings, a punch through extra cover a rare sign of aggression as he navigated the seaming ball. He started to play his shots as the afternoon wore on, smashing Tom Taylor to the cover boundary and dispatching Kerrigan over long-on for six. He had a reprieve when Ricardo Vasconcelos put down a low chance at slip, but eventually fell to White for 31, perhaps unlucky to be adjudged lbw to a ball that looked like it would have missed leg stump.

Washington became White’s fifth victim when he too fell lbw to leave Lancashire in all sorts of trouble at 77 for 6.

Lancashire skipper Dane Vilas attempted a counterattack, aiming a few lusty blows. He had reached 18 when he nicked behind off Taylor.

The end came quickly. Wood top-edged a Ben Sanderson delivery and was caught behind, while Rob Keogh chipped in with two wickets to wrap up the innings.

When Northamptonshire batted again Vasconcelos continued his poor run of form since returning from injury. He survived consecutive lbw appeals and hit back with a couple of boundaries before bottom-edging a ball from Will Williams to substitute keeper George Lavelle. Emilio Gay and Will Young survived against a seaming ball under dark skies to close out the day with a lead of 128.