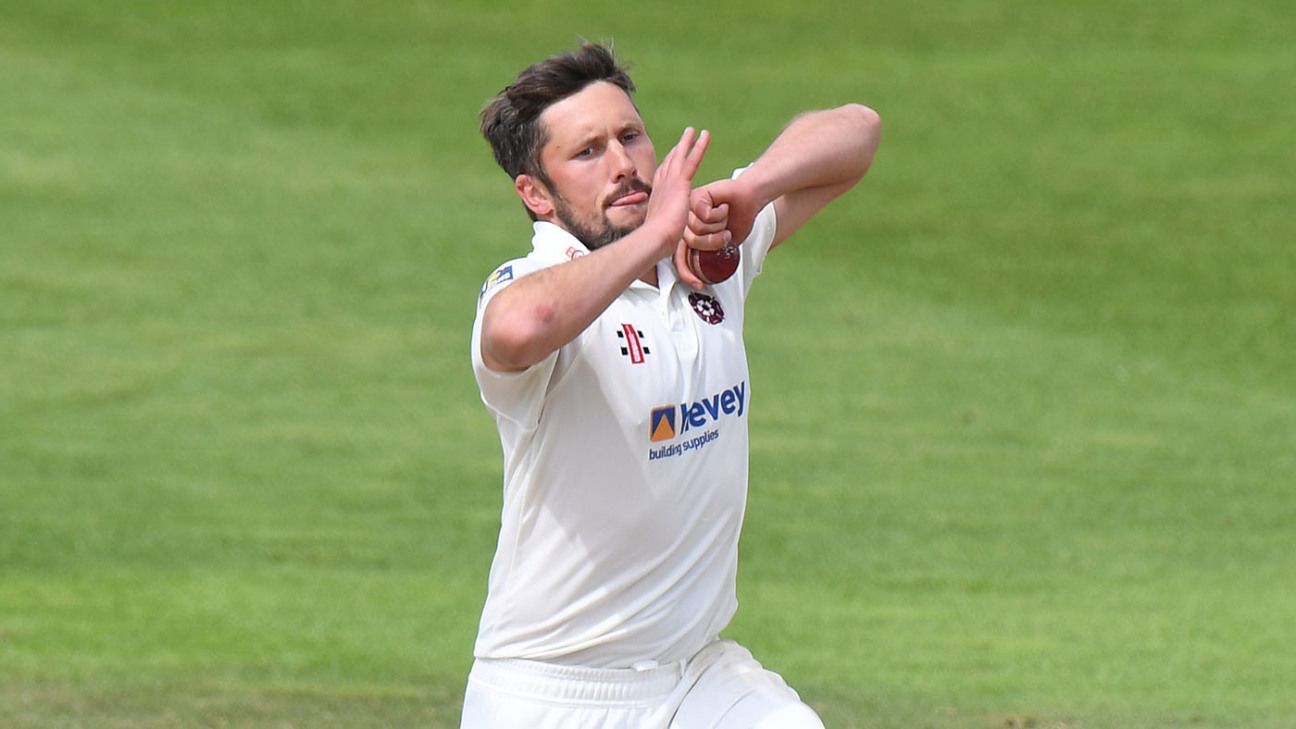 Northamptonshire have beaten Kent by 203 runs on the final day of their crucial relegation showdown in the LV= Insurance County Championship, after an afternoon of raw, stomach-churning tension at Canterbury.

Rob Keogh took the final wicket with just ten minutes to spare before the 6.03pm cut-off, giving Northamptonshire 22 points to Kent’s six and moving them above the hosts in the Division One standings.
Keogh and Simon Kerrigan spun Northamptonshire to a sensational win, taking 5 for 31 and 5 for 43 respectively, after their side had declared on 396 for 8, setting Kent a target of 365 from 74 overs. Ryan Rickelton was their top scorer with 133, while George Linde took 3 for 41.

The draw had looked the most likely result at the start of play, but the hosts collapsed from 64 for no wicket midway through the afternoon session to 161 all out.

The visitors began day four with a lead of 252, when the most realistic hope of a meaningful contest seemed to hinge on Kent taking early wickets with the new ball. Yet although Lewis McManus added just a single to his overnight score of four when he was strangled down the leg side by Matt Milnes and caught by Sam Billings in the third over, Rickelton and Luke Procter responded with a 72-run stand.

The partnership was initially cautious, but once the lead was over 300 the visitors started to swing.

When Rickelton was eventually stumped after charging down the wicket to Linde, Kerrigan came in and reverse swept Jack Leaning for six. His 10-ball cameo ended when he skied Linde to Daniel Bell-Drummond at deep-midwicket and was caught for 22.

The word on Wednesday night was that Northamptonshire were unlikely to risk a declaration against a direct relegation rival, but after 100 overs they came off, sending a frisson of excitement around the St. Lawrence that there might be a game on after all.

If the target was gettable in theory, Zak Crawley and Ben Compton batted cautiously for the seven overs through to lunch and showed little appetite for the chase after it.

Crawley lasted for just over an hour after the restart but when he was caught behind off Kerrigan, wickets began to tumble. Kerrigan removed Bell-Drummond for one, caught at first slip by Jimmy Neesham and the visitors’ hopes soared when the same bowler had Ben Compton caught by Emilio Gay at short leg for 34.

Rog Keogh then trapped Joe Denly lbw for 5, at which point Kent had lost four for 24 and still had another 41 overs to survive.

It was 96 for 4 at tea and although Jordan Cox and Jack Leaning put together a useful stand of 49, Kerrigan bowled the former for 31.

Leaning and Billings looked to be taking Kent towards safety when Kerrigan took two wickets in four balls. Leaning played on to Keogh and was bowled for 26 and Linde went in the same over, lasting only three balls before he tried to sweep Keogh and was caught by Neesham for a duck, leaving Kent in deep trouble on 144 for 7 with 16 overs remaining.

In his next over Keogh bowled Grant Stewart for a duck and Kerrigan then had Matt Milnes caught, by Josh Cobb in the slips, also without scoring. That left last man Matt Quinn at least 11.5 overs to survive with Billings.

They survived to that landmark, but with Northamptonshire rattling through the overs, there was still another ten minutes in hand and having successfully deadbatted 37 deliveries, Quinn was finally caught at short leg by the sub fielder James Sales.