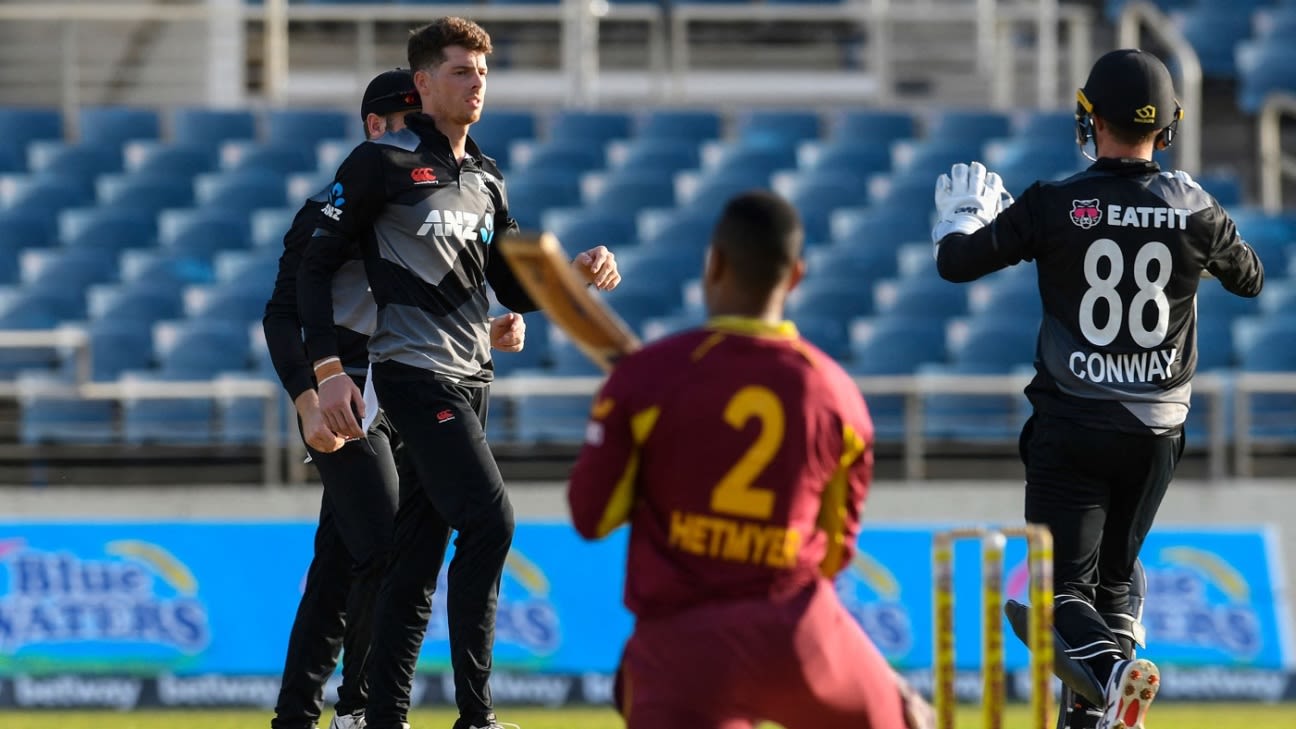 A solid innings of 47 by returning captain Kane Williamson and a dashing 33 from 15 balls by Jimmy Neesham propelled New Zealand to a 13-run win over the West Indies in the first of three T20Is in Jamaica.
Neesham struck three fours from the last three balls and 23 runs from the last over of the innings as New Zealand made 185 for 5 after being sent in to bat at Sabina Park. Left-arm spinner Mitchell Santner took 3 for 19 as New Zealand restricted the West Indies to 172 for 7.

“There was a lot of spin which was a big surprise,” said Santner, who was voted player of the match. “I think the lengths are key against these guys. They can hit you pretty far, so back of a length worked today and as a unit we were able to pick up wickets which was pretty key.”

New Zealand’s innings had two parts, separated by a lengthy rain break. Openers Martin Guptill and Devon Conway gave the tourists a strong start, putting on 62 for the first wicket. But the pair fell to consecutive deliveries from Odean Smith, who went on to take career-best T20I figures of 3 for 32.

Guptill fell to a brilliant one-handed catch by Shimron Hetmyer, who was backed up against the boundary at deep point, while Conway’s innings of 43 from 29 ended when he top-edged a catch to wicketkeeper Devon Thomas.

The rain came in the 12th over with New Zealand on 95 for 2 and Williamson at the crease with Glenn Phillips. Players were off the field for almost two hours and when play resumed New Zealand immediately lost Phillips for 17.

The New Zealand innings briefly lost momentum but Williamson re-established the impetus of the innings by taking 33 runs from his next 18 deliveries. He finally was out to another brilliant catch on the boundary, this time from Hayden Walsh who dashed from midwicket to pocket a comfortable catch at speed.

Neesham struck a six from the second ball of an over in which he also was dropped by Romario Shepherd from the bowling of Jason Holder. West Indies paid the price with Neesham’s three fours from the last three balls.

“We want to get better as a group but in saying that I was happy with the performances,” West Indies captain Nicholas Pooran said. “Santner bowled very well and Ish [Sodhi] got away with a few. Scores above 175-180 are tricky for us. Unfortunately losing is contagious and we’re a losing side at the moment.”

Shamarh Brooks anchored the top of the West Indies innings with 42 at almost a run a ball. But there was a lack of consistent momentum afterward. Pooran with 15 from eight balls, Holder with 25 from 19 and Rovman Powell with 18 from 12 all threatened to take control of the game but couldn’t carry on.

Finally, Shepherd and Odean Smith shared a 50 partnership from 23 balls for the eighth wicket to fan West Indies’ hopes. Shepherd struck an unbeaten 31 from 16 balls and Smith 27 from 12. But West Indies came to the last over needing 26 runs and the task proved too much.