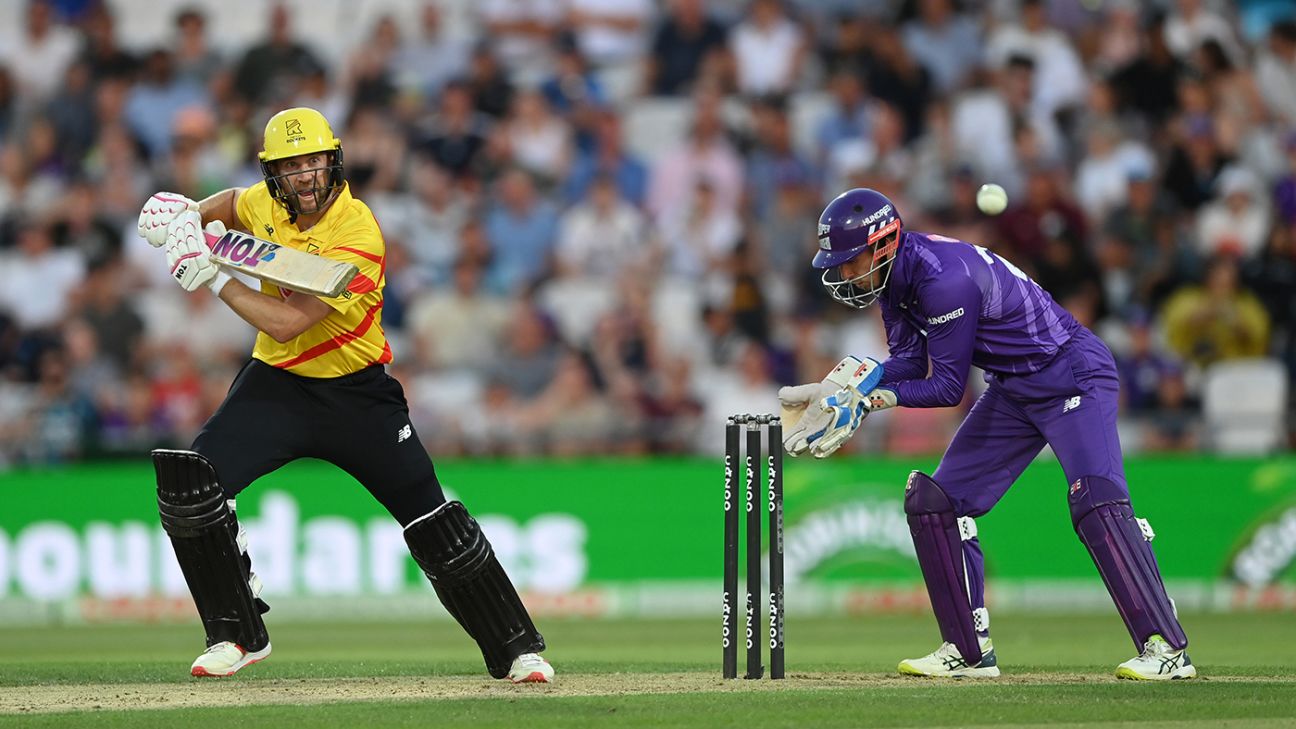 Early success with the ball preceded Dawid Malan‘s imperious, match-clinching 88 not out as Trent Rockets continued their winning start to the men’s Hundred at the expense of the Northern Superchargers at Headingley.
England fringe quick Luke Wood and fellow seamer Luke Fletcher struck twice apiece as Superchargers, invited to bat, slipped to 68 for 6 after 53 balls before a blistering 50 off 27 from David Wiese ensured respectability at 152 for 8. But, at a notoriously fast-scoring venue, it was never likely to be enough – and Rockets won by seven wickets with six balls remaining.

Namibian allrounder Wiese walloped five sixes, the majority down the ground, in an entertaining rescue act alongside Roelof van der Merwe, the seventh-wicket pair adding 83 in 44.

It came after the home top order subsided against some accurate and aggressive back-of-a-length bowling from Fletcher and left-arm duo Wood and Australian overseas Daniel Sams. Sams secured the pick of the Rockets’ figures with 3 for 31 from 20 balls.

Adam Lyth top-edged the fixture’s first ball – a pull at Wood – to short fine leg before captain Faf du Plessis feathered Sams behind to leave the Superchargers at 14 for 2 after eight balls.

Michael Pepper, Dwayne Bravo, John Simpson and Adam Hose all then fell after making starts. The latter was stumped by Tom Kohler-Cadmore off Samit Patel’s left-arm spin, a particularly tight call which led to third umpire Steve O’Shaughnessy amusingly exclaiming, “Oh my giddy aunt, that doesn’t help me much” when shown a different replay angle.

Wiese was lbw to a Fletcher no-ball on 20, and then caught off the free hit, allowing him to boost the Superchargers.

They were missing Harry Brook due to England Lions duty and the injured David Willey, meaning Lyth and Adil Rashid were the only two Yorkshire players in their line-up. Rockets included three in Kohler-Cadmore, Malan and favourite son Joe Root.

A 13,836 crowd basked in the glorious Headingley sunshine. They saw Malan, strong on both sides of the wicket, dropped on 9 by Hose at cover off Wiese early in the chase.

It was the kind of chance which needed to be taken, as Hales crashed Wiese down the ground for six to end the second set of five at 19 without loss. Already, it was looking a tough road back for the Superchargers.

Both Hales and Malan deposited further sixes over midwicket into the Western Terrace, taking the Rockets to 58 after 23.

Superchargers hung there and when Hales and Kohler-Cadmore – to Rashid and Ben Raine – both fell in the space of 10 balls, the score became 93 for 2 after 62. However, Malan reached his fifty off 36 balls and ensured there were no surprises with the second-highest individual score in the men’s Hundred.