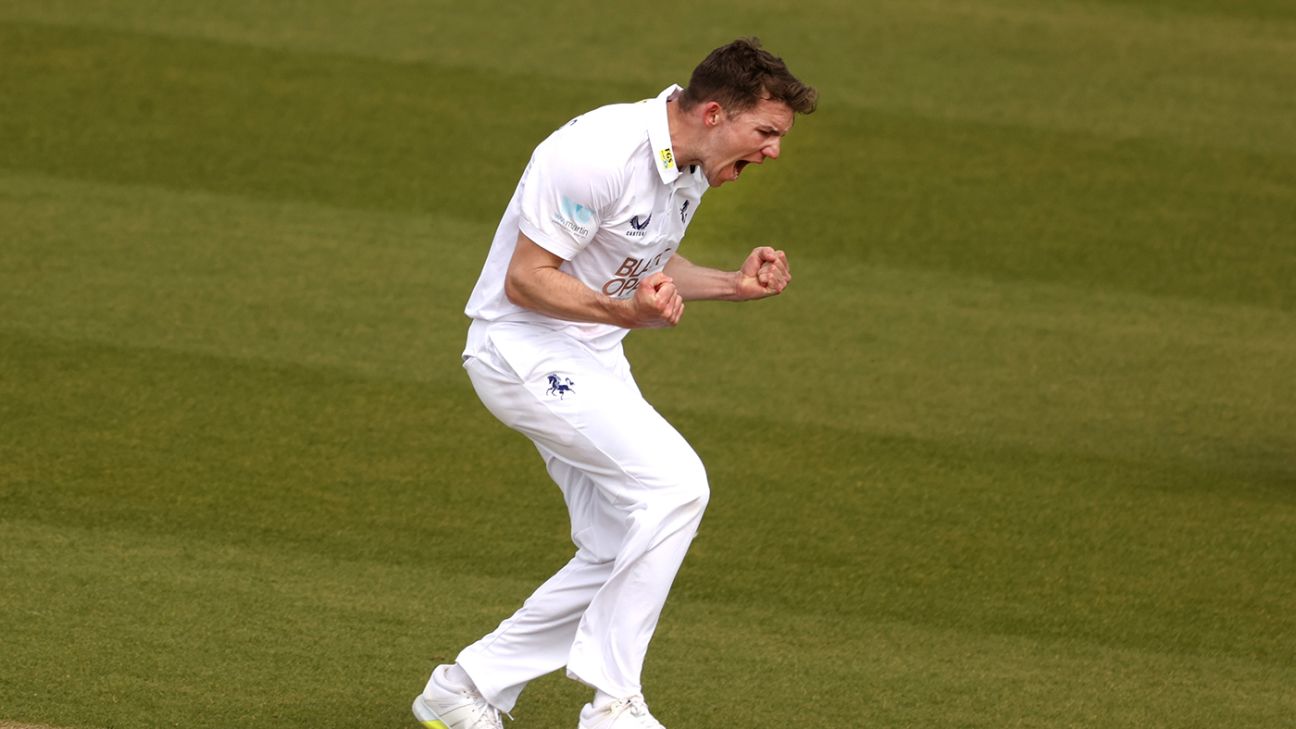 Kent took a huge step away from the lower reaches of the LV=Insurance County Championship Division One with a thumping 177-run victory over struggling champions Warwickshire at Edgbaston.

After resuming on 28 for 2, in pursuit of a target of 325, the home side folded to 147 all out before lunch. Matt Milnes led the demolition with a destructive burst of 6.5-1-11-4 but Kent’s quartet of seamers all played their part in building the pressure under which the Bears buckled.
The result leaves Warwickshire, who visit leaders Surrey next week, in real jeopardy of following their title triumph in 2021 with relegation in 2022. Kent, meanwhile, spring into mid-table after an excellent performance by a team galvanised by the arrival of overseas pacemen Navdeep Saini and Matt Henry.
Their seam attack possessed the cutting edge that the depleted Bears, without the injured Liam Norwell, Olly Stone and Chris Woakes, sorely lacked. Kent’s bowlers also were supported by fine work in the field, led by captain and wicketkeeper Sam Billings who took 12 catches in the match, surpassing the previous Kent record of ten (Fred Huish, 1911, and Jack Hubble, 1923).

The final day had a helter-skelter start as Sam Hain hit his first three balls for four but then edged a fine delivery from Saini to Billings.

Dom Sibley and Will Rhodes dug in to add 35 but then came a moment which summed up the old cricket truism that it’s when things are going against you that Lady Luck will give you another good kicking. Rhodes, having looked in decent nick and started to sow the seeds of a partnership with Sibley, was strangled down the leg side off Quinn.

That’s always an infuriating way to get out – all the more so when it triggers a collapse of 61 for 7 in 91 balls.

Kent seam depth in this game showed itself as, with spearheads Saini and Henry grazing, Matt Quinn and Milnes took up the attack and took five wickets in 30 balls.

Quinn followed the wicket of Rhodes with that of Dan Mousley who edged behind. Milnes produced an unplayable lifter to take Michael Burgess’ edge and then forced Sibley to play on. Milnes had 3 for 7 after taking a return catch from Danny Briggs.

With Warwickshire’s last two wickets needing to find 196, Kent turned to the spinners to improve their over-rate. Jack Leaning disposed of Craig Miles, caught and bowled, before Milnes returned to round off the rout when Olly Hannon-Dalby edged to first slip. Kent’s visit to Birmingham simply could not have gone any better.