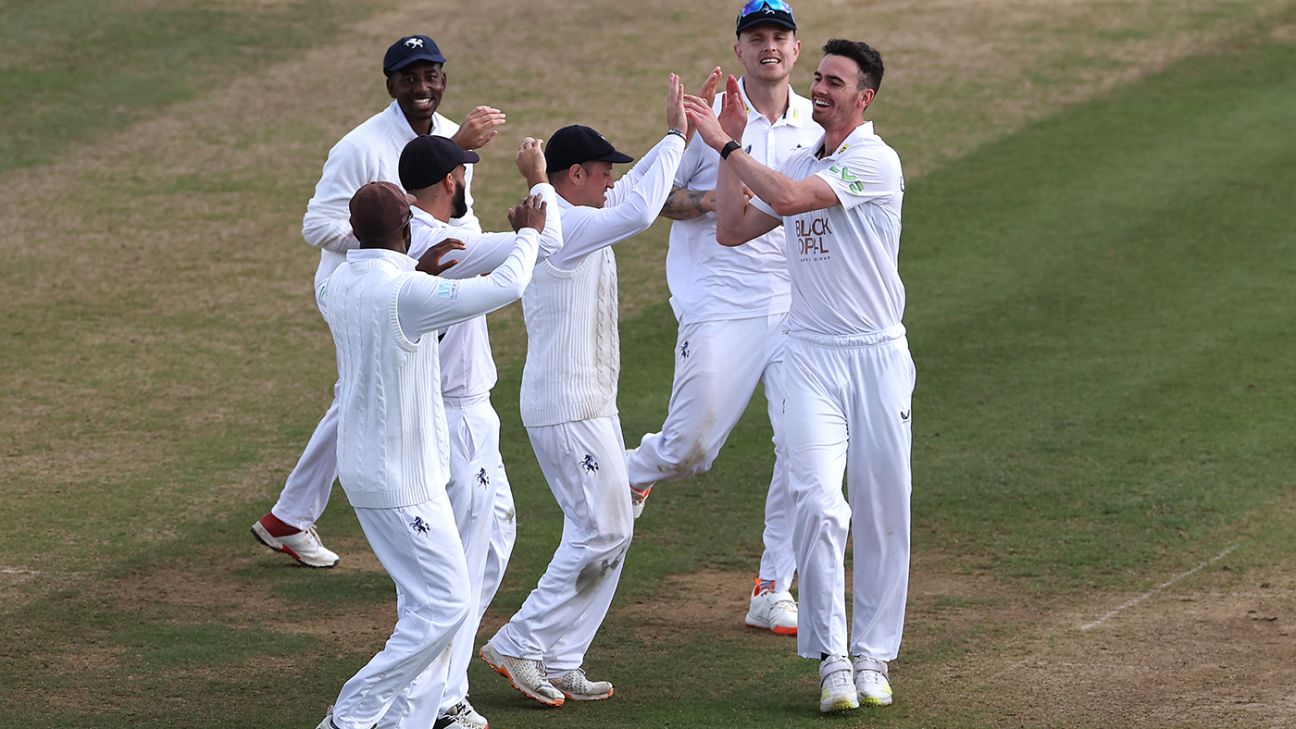 Hampshire’s dream of winning the LV= Insurance County Championship title for the first time in 49 years was ended by a 77-run defeat to Kent.

But Hampshire’s hopes of replicating the 1961 and 1973 champions were dashed to give Surrey the pennant for the second time in five seasons – with Nathan Gilchrist taking 4 for 60, including the winning wicket as Hampshire only reached 300.

It was Hampshire’s third defeat of the season, and Kent’s third victory.

Hampshire’s hopes of winning the game had been trounced after they had been bowled out for 57 – in doing so giving up a 108-run first-innings deficit – and were further diminished when they had lost four wickets in their pursuit of 378 on the second evening.

Weatherley had been the shining light of that period with his first score above 25 since April. He had ended the day on 54, having left and defended well, while also finding ways to score.

The morning only brought two runs in a six-over stay before a full Gilchrist delivery thudded into his shin. Gilchrist’s following over saw the end of the unbalanced Ben Brown, who clipped a similarly full ball to square leg.

Conor McKerr had been sent on loan from Surrey for this fixture, but hadn’t personally helped his parent county with one and a duck with the bat, and no chance to bowl in the first innings. His celebration was perhaps the loudest of the day when he pinned Aneurin Donald in front.

Vince wasn’t allowing Kent to ease to victory though, as he demonstrated his trademark mix of dogged determinism to win the game for his team and beautiful shot-making. His first three scoring shots were variations on a cover drive, including the first ball of the day.

He moved to his sixth half-century of the season off 81 balls with a dabbed three down to third, to take the required runs down to 169 runs at lunch.

But only 27 more runs were knocked off before a turning half-tracker from Jack Leaning lit up Vince’s eyes, and his pull shot fell straight into Tawanda Muyeye’s grasp on the deep midwicket boundary. It ended a 90-run stand with Fuller which had almost made Hampshire surprise favourites.

Kyle Abbott was undone by bounce out of the footholds by Leaning to loop to first slip. And despite Fuller racing past a 74-ball fifty and biffing some late runs, Mohammad Abbas had his off stump knocked over by Gilchrist.

The defeat is Hampshire’s first at home in the Championship since losing to Somerset last May – a run of 10 victories – and just their second since the start of the 2019 season.