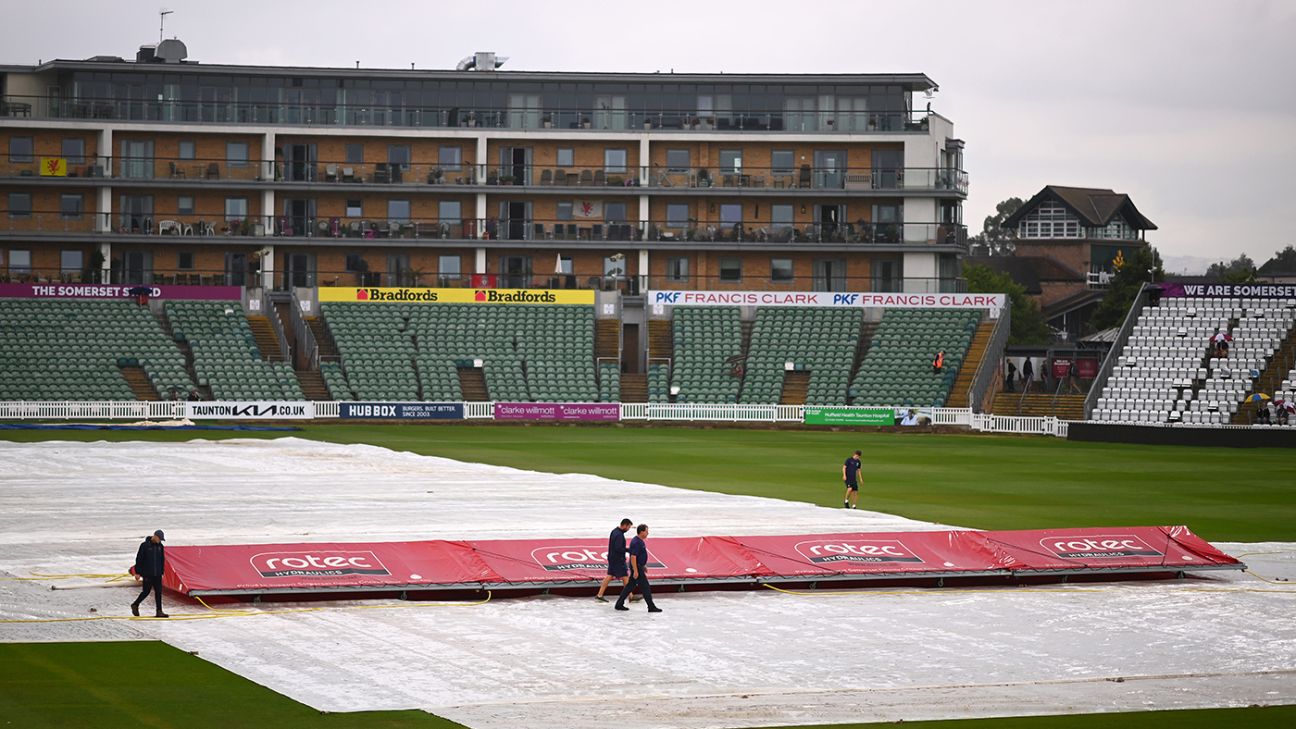 Gloucestershire’s bid for a first LV= Insurance County Championship win of the season was thwarted by the weather on the final day of the match with Somerset at Taunton.

The visitors began the day by extending their second innings total from an overnight 246 for five to 278 for seven before declaring with a lead of 373.

But soon the rain that had been forecast for much of the first three days set in and the match was condemned to draw at 3.10pm, with Somerset 11 without loss in their second innings.

While Gloucestershire dominated the match from the opening morning, they took only 12 points, having two deducted for a slow over-rate, while their neighbours also picked up 12.

That lifted Somerset seven points clear of second-from-bottom Warwickshire, while their arch-rivals are doomed to relegation, 30 points adrift at the bottom of the table with only two games to play.

With the weather forecast suggesting showers, Gloucestershire’s decision to bat on at the start of the day was surprising.

Skipper Graeme van Buuren skied a catch to fine leg off the first ball of the day, sent down by Josh Davey, and Jack Taylor followed suit in the second over, lofting Jack Brooks to mid-off.

David Payne hit a couple of big sixes before the declaration came after 15 minutes, with rain starting to fall.

The initial shower delayed the start of Somerset’s innings by 15 minutes. When it got underway the hearts of home supporters in a small crowd were soon in their mouths.

Iman-ul-Haq, so solid in the first innings, aimed an expansive back-foot shot off only the third ball, bowled by Payne, and survived a massive appeal for a catch by wicketkeeper James Bracey.

More frustration for Gloucestershire followed when, with only 3.5 overs bowled, the rain returned, with Somerset openers Tom Lammonby and Imam on six and five respectively..

Umpires Tom Lungley and Nigel Llong decided that an early lunch would be taken at 12.20pm with a view to restarting the game at 1pm.

But the rain became heavier and the next announcement was of a 2.15pm pitch inspection, which also proved optimistic.

Tea was taken at 2.40pm, by which time the main item of interest appeared to be whether Gloucestershire would have time to correct a minus two over-rate.

Half an hour later it was clear that wouldn’t happen and Somerset had by far the greater cause for satisfaction at the outcome.