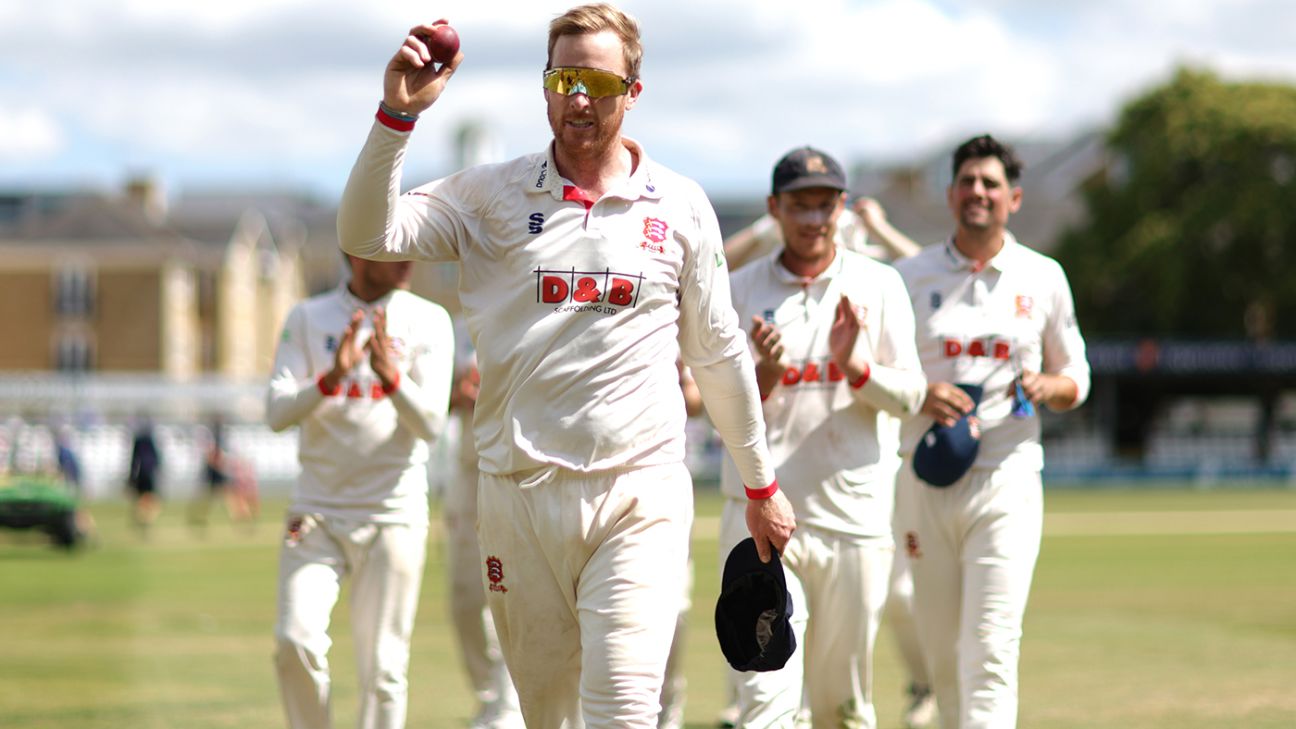 Simon Harmer, with figures of 5 for 44, was the architect of Gloucestershire’s batting woes as they were bowled out for a meagre 136 having won the toss.
After Harmer had tortured the visitors on a scorching hot day at Chelmsford, Alastair Cook and Tom Westley carried Essex to 127 for 1 at the close with Cook posting a 126-balls half-century completed with the 8th boundary of his innings.

Only Graeme van Buuren and Zafar Gohar emerged with any credit from the lamentable Gloucestershire first innings, which concluded 40 minutes after lunch.

Then Cook and Westley demonstrated the value of disciplined graft with a century stand spanning 256 balls with Westley completing a 146-ball fifty shortly before the close.

By lunch the visitors, who are still seeking their first LV=County Championship win of the summer, had lost their top-five runs getters in red-ball cricket this season as they stumbled to 104 for 6 at the break.

Although new ball bowler Sam Cook was away on England Lions duty, Jamie Porter ensured a flying start for the home side striking twice in his first four overs to remove the opening pair of Marcus Harris and Chris Dent for single figure scores before the sight of Essex maestro Harmer striding in to start his bowling spell from his customary River End served to increase Gloucestershire’s concerns.

The match was only 40 minutes old when the South African off-spinner took the ball for the tenth over of the innings. After two overs, his concerns regarding the shape of the ball were acknowledged by the umpires. Harmer himself jogged to the boundary, retrieved the bag of alternative replacements and after handing it to the officials, was handed a replacement cherry.

Finding it immediately to his liking, he took the first of his five wickets when Ryan Higgins slapped him straight to long-on. Without addition Miles Hammond, who had just moved into double figures, offered no stroke to an Aaron Beard delivery that clipped off bail to leave the visitors 37 for 4.

James Bracey and Graeme van Buuren doubled the score but the threat of Harmer’s canny variations of flight and length were always looming large.

Having scored 12, Bracey was pushed onto the back foot and edged to wicket-keeper Adam Rossington and the same Essex combination teamed up to dismiss Ollie Price who was stumped.

Seven balls after lunch, the visitors troubles continued when van Buuren, who had been functionally effective in advancing to 34 from 37 balls set off for a single and was stranded at the non-striker’s end where he found Tom Price a stationary onlooker.

Gohar drove effectively for an unbeaten 29 but Harmer rounded of the innings with two of the last three wickets taking his tally to 340 first-class victims for Essex. It was the 27th time he has returned 5 wickets or more in an innings for the county since joining them in 2017.

Although the visiting attack – missing David Payne and Benny Howell both with England Lions – were given a boost with the early dismissal of Nick Browne, Cook will resume on 61 and Westley 50 in the morning