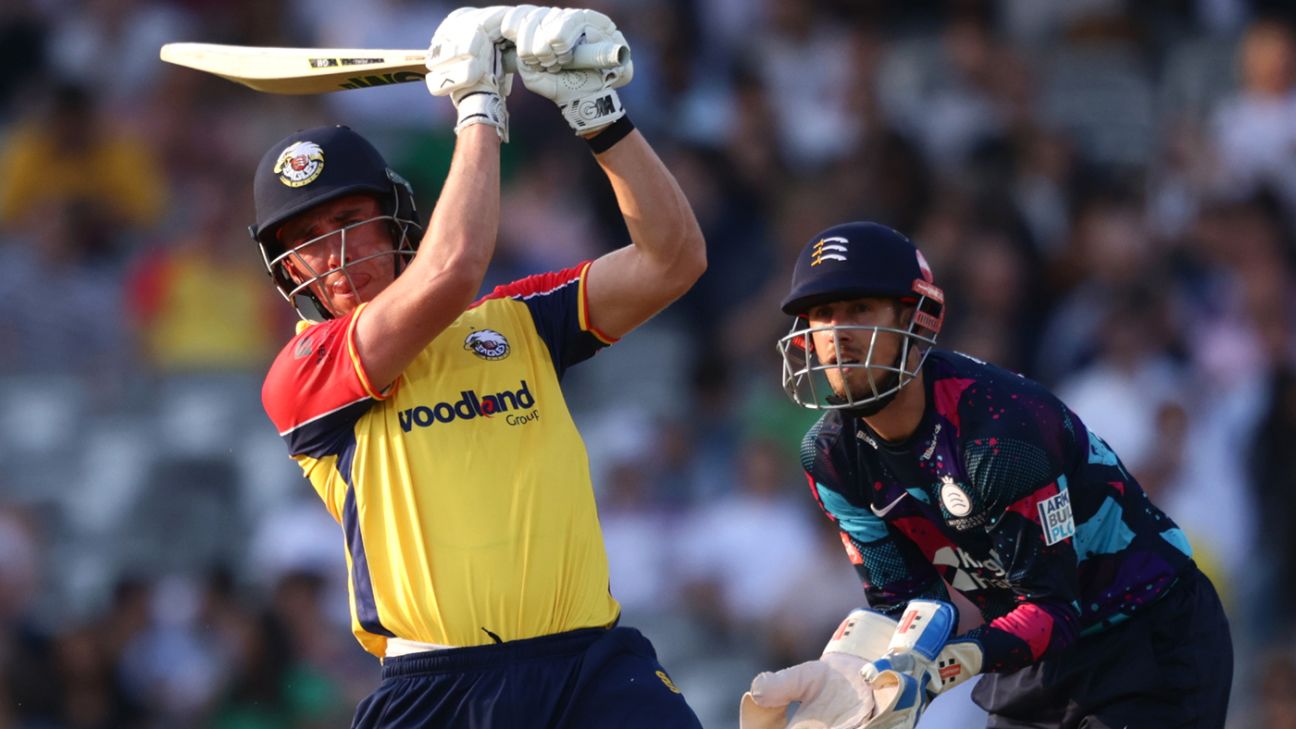 Lawrence thrashed 71 off 37 balls, Walter a blistering 23-ball 58 and Adam Rossington a booming 45 to take Eagles to 254 – beating the 244 set barely two weeks ago. Glamorgan reached 185 for 7 in reply, with stand-in captain Sam Northeast pumping an unbeaten 97, to lose by 69 runs.

Essex, the 2019 winners, had already confirmed a knockout spot and moved up to second in the South Group. They will host a last-eight match if Surrey beat Somerset on Sunday.

Essex were put in and blasted it from ball one on a belting wicket with short boundaries. Robin Das struck the first of 16 sixes in the third over by pinging over long-off before following it up with a second over deep midwicket with the next ball.

Das pulled another ball to the boundary before he skied to cover to give Jamie McIlroy his first T20 wicket on debut. He would later pick up Lawrence to claim an impressive 2 for 32 – the only bowler to go at under 10s.

Rossington skipped his way to 45, having scored 95 the previous evening, with seven boundaries and a six off 23 balls. But his quick scoring was just the prelude for what was to come.

Michael Pepper was caught on the reverse and Rossington holed to long-on before Lawrence and Walter went ballistic with their 101-run partnership off 69 balls, although there was an 18-ball gap between boundaries at one point.

Dan Douthwaite took the biggest tap going for 12 and 13 in successive overs as he returned the fourth-worst bowling figures in Blast history, eventually conceding 66 in four wicketless overs.

But the showpiece over for Essex was the 31 taken off Prem Sisodiya. Walter started off with four sixes, once over the long square boundary and three straight down the ground, before scrapping a single, then Lawrence completed the over with another swinging maximum.

It started a final five overs where 95 runs were plundered. Walter fell, having brought up 20-ball fifty, but Daniel Sams picked up where he had left off with three sixes in his first four balls.
Lawrence had been 18 off his first 20 balls but caught up in style to reach his 11th T20 half-century in 30 balls before eventually clothing to long off for 71. Fifteen came off the final over as Eagles crashed the joint fourth-best total in the tournament’s history.

Glamorgan never looked like replicating their greatest chase of 224 – against Essex in 2017 – with three wickets falling in the powerplay. Aaron Beard was the chief destroyer as he picked up 2 for 16 in his three overs with debutant Tom Bevan top-edging to deep third and Billy Root seeing his three stumps obliterated. Sams had Colin Ingram flicking to deep square leg.

Eddie Byrom and Chris Cooke were both caught, but Northeast, skippering his third Blast side for the first time, stuck around and plundered a couple sixes of his own on his way to a 38-ball fifty – his third in T20s against Essex. Douthwaite chipped in with 34 off 17 in a 62-run stand but had his stump broken by Sams. As the required rate rose beyond the impossible 36 mark, Andrew Salter and Northeast started to have fun with 16 runs coming from three successive overs.

Salter holed out and Northeast ended his campaign needing a boundary for a second Blast century but could only bunt a single.