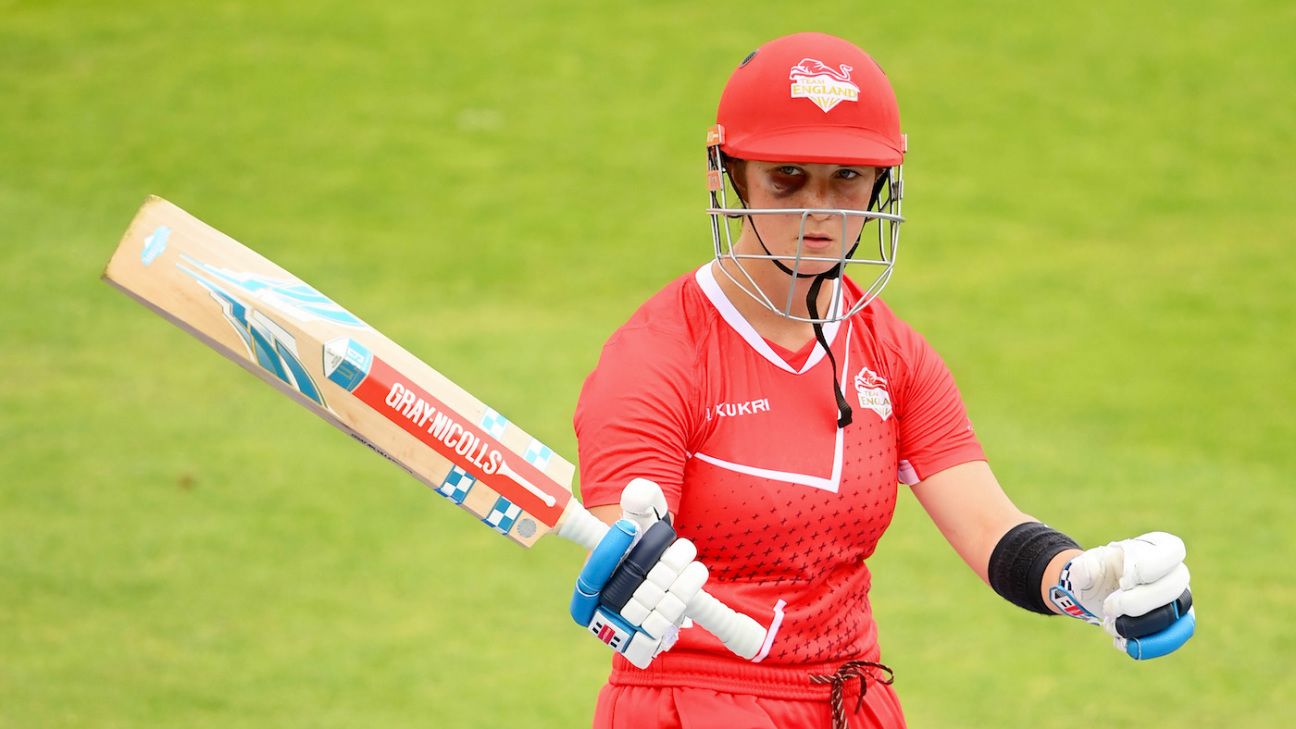 A half-century to 17-year-old Alice Capsey took England to two wins from as many matches at the Commonwealth Games as they beat South Africa by 26 runs in Edgbaston.
Capsey reached fifty in 36 balls and became just the second teenager to reach the milestone in a T20I for England after Sarah Taylor achieved the feat as an 18-year-old against New Zealand in 2007.
It helped England set South Africa – a side they have now sunk seven times in white-ball games this summer – a target of 168 and, despite an opening partnership of 64 between Anneke Bosch and Tazmin Brits, and an unbeaten 41 by Laura Wolvaardt, they couldn’t score quickly enough against a very disciplined group of England bowlers.

Capsey had been building towards this and, in just her third international innings, she reached fifty. It wasn’t the first time she had answered the call after opener Sophia Dunkley fell early.

Capsey didn’t bat in her debut match, England’s second T20I against South Africa in Worcester, but she got her chance when she was elevated to No. 3 in the third match of that series in Derby and smashed four consecutive fours on her way to 25 off 17. Then, having copped a nasty black eye during the warm-up for England’s Commonwealth Games opener against Sri Lanka, she scored 44 at just over a run-a-ball to top score in a five-wicket victory.

On this occasion, she found herself in the action early again when Dunkley fell in the second over. Capsey and Danni Wyatt capitalised as Nadine de Klerk bowled too full and too wide, helping themselves to 21 runs off her first over including three fours in succession to Capsey.

Capsey survived two run-out chances, both times Ayabonga Khaka’s shy at the stumps was off target. After Wyatt fell edging Shabnim Ismail behind to Sinalo Jafta for 27, Capsey showed she wasn’t afraid of Ismail’s pace, advancing steadily down the pitch to one of the fastest bowlers in the women’s game and crashing her through the covers for four and, at the end of the powerplay, England were 49 for 2.

Capsey clubbed a third de Klerk full toss over cover for four as the bowler conceded 34 off her two overs and was removed from the attack. Capsey moved to 48 with an effortless six off a Bosch full toss through backward square leg and, after Nat Sciver fell edging Bosch behind, Capsey brought up her half-century with a rushed single and her acknowledgment of the crowd’s applause was somewhat anticlimactic as it came only after Amy Jones was confirmed to have made her ground at the striker’s end. Capsey fell a short time later, offering a simple return catch to Nonkululeko Mlaba.