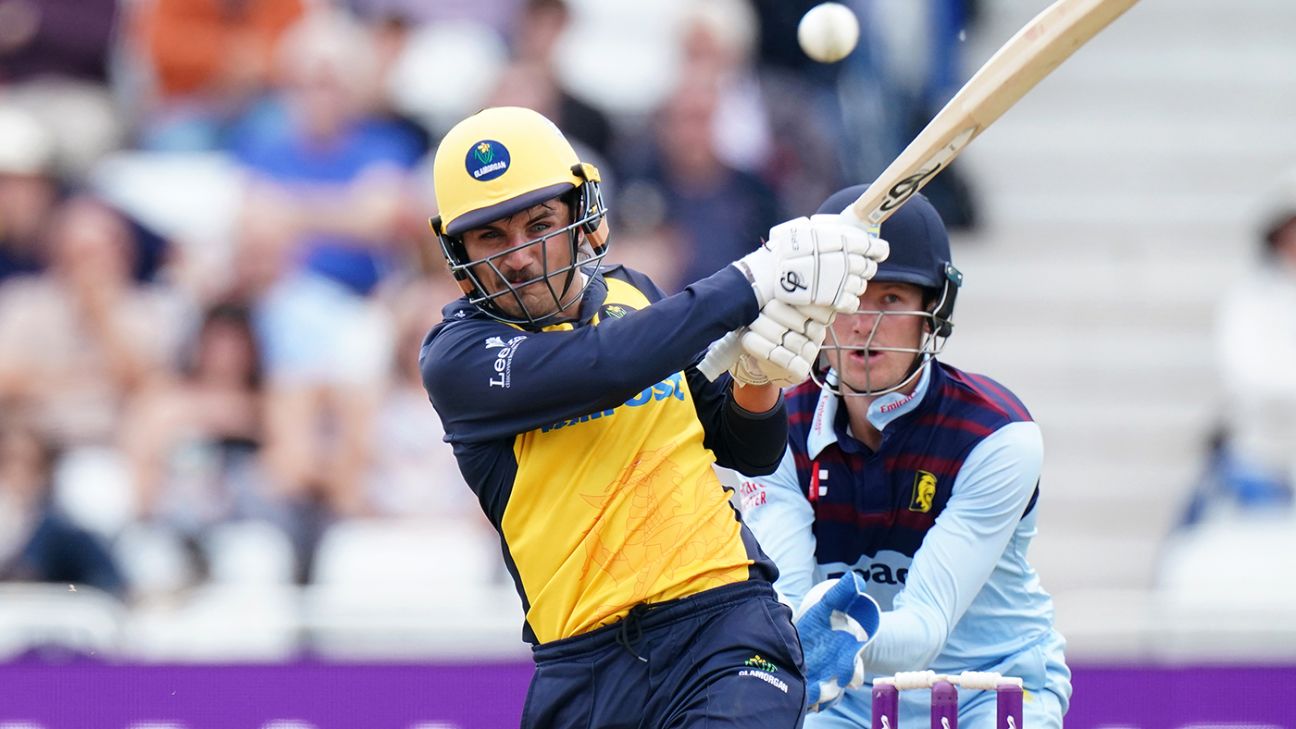 Glamorgan began their defence of the Royal London One-Day Cup with an emphatic eight wicket victory over Derbyshire in the opening Group B match at Derby.

Timm van der Gugten took 4 for 41 and Jamie McIlroy 2 for 13 as Derbyshire were bowled out for 110 after Glamorgan won the toss in a game reduced to 47 overs by rain with Mattie McKiernan’s 43 off 56 balls the only innings of substance.
Glamorgan slipped to 28 for 2 but skipper Kiran Carlson‘s unbeaten 54 off 53 balls and Colin Ingram with 30 not out took the visitors to 112 for 2 with 25 overs to spare.

Derbyshire never recovered from losing three wickets in the first four overs on a humid and breezy morning. McIlroy and van der Gugten got the ball to swing in good bowling conditions and Derbyshire’s chances of setting a competitive total were all but over after the first powerplay.

“I couldn’t have asked for much more really,” Carlson said. “The way we bowled at the start was exceptional, we didn’t really give them much, we took our chances and the big guys up top, Jamie and Timm really set the stall out.

“The wicket was tough, there was a bit more in it than both teams thought but we bowled first just because of the overheads.

“It was nipping a bit and swinging and it was really tough at the start when it was doing quite a lot. It flattened out a little bit as the ball got older but when we had them 6 for 3 it must have been tough for them because we were bowling so well.”

Billy Godleman went in the second over when his attempt to turn van der Gugten through midwicket ended in the hands of mid-on and Luis Reece quickly followed, edging a loose drive behind.

Harry Came was lbw half-forward and although Tom Wood drove van der Gugten over cover for the first boundary in the sixth over, he was brilliantly caught by Chris Cooke diving to his right when he cut hard at the same bowler.

After a short rain delay, Brooke Guest drove a return catch back to McIlroy leaving Derbyshire’s hopes of respectability resting with Anuj Dal and McKiernan. The pair almost doubled the score but Dal swatted Joe Cooke to cover and when Mark Watt was bowled by David Llloyd, Derbyshire were sinking fast at 62 for 7.

McKiernan pulled Dan Douthwaite for four and drove van der Gugten for another boundary but he fell short of what would have been a first one-day fifty when he drove Douthwaite to cover.

The innings ended when Conners edged a drive at van der Gugten which left Glamorgan to chase down what looked like a straightforward target.

They got there in relative comfort but only after losing Lloyd and Sam Northeast inside the first 10 overs. Lloyd got a leading edge to Aitchison and was caught at point before Northeast, who scored a quadruple-century just over a week ago, drove at Conners and was well caught by Wood diving across at second slip.

Another wicket then might have sowed some seeds of doubt in the Glamorgan camp but Ingram and Carlson restored order before accelerating towards an impressive victory.

Derbyshire were well beaten and McKiernan admitted: “We’ve got to draw a line under that and move on to the game on Friday. It’s a disappointing start to the campaign but it doesn’t mean we can’t bounce back. There was a little bit in the wicket early on but I think we’re disappointed as a batting group not to get a competitive score.”