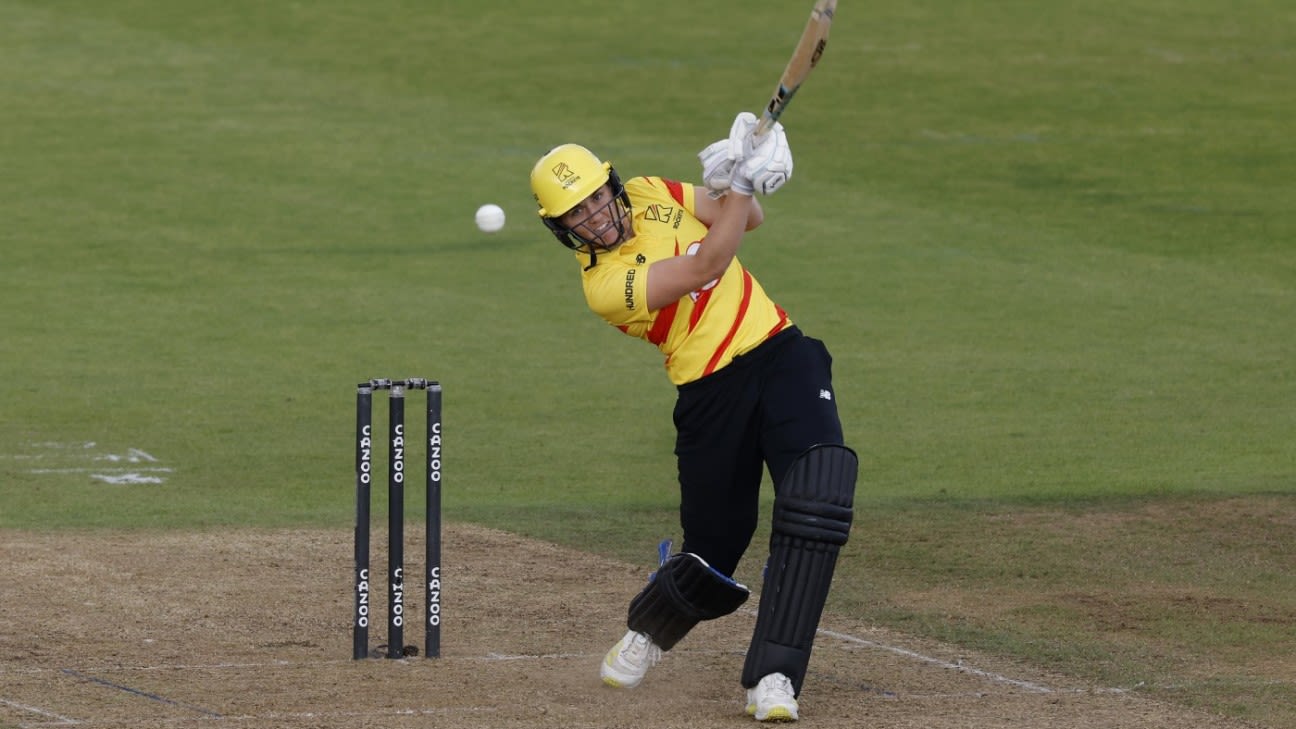 A stunning flurry of sixes from Nat Sciver couldn’t quite power Trent Rockets over the line in an eliminator thriller at the Ageas Bowl, as Southern Brave booked their place in Saturday’s Lord’s final, thanks to an all-round masterclass from Georgia Adams against her former team.

Middle-order batter and offspinner Adams carried Brave to a competitive score with an exhilarating 38 off 24 to lift her side to a total of 134 for 6, having looked unlikely to reach three figures at one point.

Adams then picked up 2 for 15, including both Bryony Smith and Mignon du Preez as Rockets slipped from 40 for 0 to 45 for 3 in the space of six balls, and the game seemed done and dusted when Tahlia McGrath backed up a haul of 2 for 11 in her first ten balls with a pinpoint penultimate set that went for just four more runs.

With 24 runs still needed, Brave captain Anya Shrubsole backed her allrounder to close out the contest, but Sciver – who had stood firm while wickets fell away around her – was now in the zone, and with a two from the first ball and then three consecutive launches for six, she brought the requirement down to four from one. McGrath, however, held her nerve, and Sciver could only drive her final delivery to mid-off for a single.

Brave duly won by two runs, and will be out for revenge against Oval Invincibles in the final after being bowled out for 73 last year.

Rockets had lost by 10 wickets in the group stage game between the two sides, but enjoyed a much better start as they picked up Danni Wyatt and Sophia Dunkley in the first end, the former for her second duck in succession.

Smriti Mandhana picked up a trio of boundaries but she then edged Sciver to short third. Brave’s big three batters, who had scored about two-thirds of their runs in the competition, all out inside 30 balls having been stuck in.

It needed the middle order to fire, and slowly they did. Australian McGrath – who had only scored 19 runs in her four innings thus far – steadied things with 31 off 29 balls, having square driven her first ball to the boundary. She put on 34 with Maia Bouchier before failing to clear mid-off, before Adams joined Bouchier to accelerate with a 43-run stand.

Bouchier crashed Katherine Brunt twice through the off side before heaving Georgia Davis through wide long-on to move to 29 and her best score of the tournament.

Adams was even more vicious in her ball striking, after Bouchier had departed, bonking a straight six off Alana King and another dropped into the boundary sponge by Brunt to smash 38 off 30 balls – although she was caught off the final ball by Brunt.

In reply, Elyse Villani and Bryony Smith ticked off runs at a run-a-ball. Smith survived a drop at midwicket but things seemed much less frenetic than the Brave innings.

That all changed with the 38th delivery as Rockets collapsed. First, Adams knocked back Smith’s middle stump with her offspin. Then McGrath picked up Villani paddling to short fine and Mignon du Preez with a reactionary caught and bowled, to her own disbelief, in the same set. The team in yellow slumped from 40 without loss to 45 for 3.

Marie Kelly picked out long-on to hand Adams her second wicket, King was castled by fellow Aussie leggie Amanda-Jade Wellington and Molly Strano brilliantly ran out Brunt. But Sciver was the major piece still left in the puzzle.

She was dropped at mid-off on 8 and had a stumping missed on 11, but tucked into any poor balls. She clubbed Lauren Bell, Wellington and McGrath for sixes over the long-on boundary. Her fifty came in 29 balls but her best was still to come. Agonisingly for the Rockets, it was too little, too late.