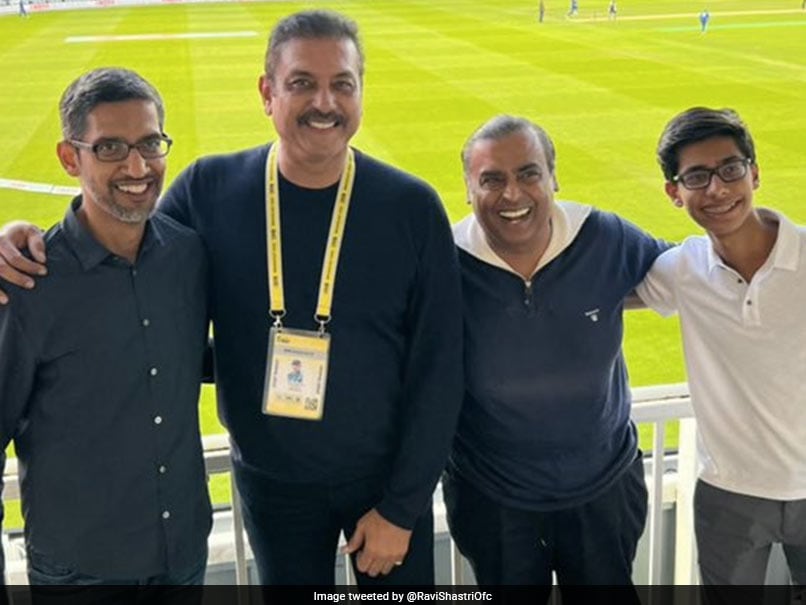 Former Team India head coach Ravi Shastri is currently in the UK doing commentary for Sky Sports for the ongoing second edition of the Hundred competition. Shastri recently was at the game which was being played at the Lord’s Cricket Ground along with Mukesh Ambani and Sundar Pichai. On Tuesday, the former head coach shared a picture with Ambani and Pichai. Taking to Twitter, Shastri captioned the post as: “In the august company of two people who love their cricket @HomeOfCricket- Mr Mukesh Ambani and Mr @sundarpichai at @thehundred @SkyCricket.”

In the august company of two people who love their cricket @HomeOfCricket – Mr Mukesh Ambani and Mr @sundarpichai at @thehundred @SkyCricket pic.twitter.com/JYnkGlMd8W

Mukesh Ambani is the chairman and managing director of Reliance Industries Limited while Pichai is the CEO of Google.

Earlier, Shastri had backed calls for reducing the number of overs in ODIs, saying ODIs have been played for 50 overs for far too long.

During the commentary stint on FanCode for the second ODI between India and West Indies, Shastri said: “There is no harm in shortening the span of the game. When ODIs started, it was 60 overs. When we won the World Cup in 1983, it was 60 overs. After that, people thought that 60 overs were a bit too long. People found that span of overs between 20 to 40 hard to digest. So they reduced it from 60 to 50.

“So, years have gone by now since that decision so why not reduce it from 50 to 40 now. Because you got to be forward-thinking and evolve. It stayed for 50 for too long,” he added.

Earlier, Shastri had said that only the top-six teams should get to play Test cricket and the sport can be spread to different countries through white-ball cricket.

“If you want Test cricket to survive you cannot have 10, 12 teams playing. Keep the top six, keep the quality of cricket going and respect quality over quantity. That’s the only way you open up a window for other cricket to be played. Expand teams in T20 or one-day cricket if you want to spread the game, but in Test cricket, you will have to reduce the teams, then it does not matter if England does not go to West Indies or if West Indies does not come to England,” Shastri had said on Sky Sports.