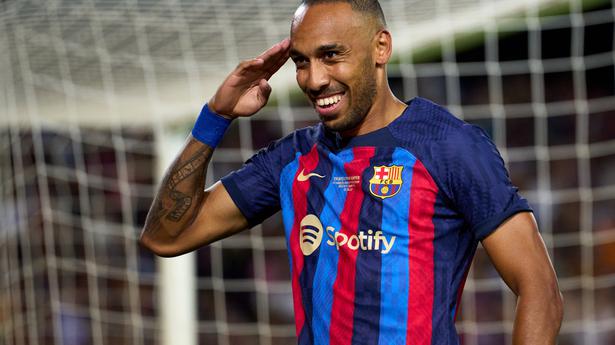 Chelsea have signed Pierre-Emerick Aubameyang from Barcelona, with the Gabon striker signing a two-year contract to seal a return to the Premier League, the two clubs said on Thursday.

The transfer was announced well after the 2200 GMT deadline but Chelsea had submitted the paperwork to the Premier League in time after the former Arsenal striker arrived in London late on Thursday.

Barcelona said it reached an agreement where Chelsea paid 12 million euros ($11.94 million) to bolster its front line with Aubameyang, who previously thrived under manager Thomas Tuchel at Borussia Dortmund.

“I’m really happy. It’s an honour to be part of this team and I can’t wait to start. I have some unfinished business with the Premier League so it’s good to be back and really exciting,” Aubameyang said in a statement.

Aubameyang scored 13 goals in 24 games for Barcelona, but was surplus to requirements after they signed Poland striker Robert Lewandowski from Bayern Munich and needed to offload players to comply with LaLiga’s financial rules.

Aubameyang is no stranger to the Premier League having spent four years at Chelsea’s London rivals Arsenal, scoring 92 goals in all competitions.

The 33-year-old was the league’s joint top scorer in the 2018-19 season and led Arsenal to the FA Cup title in the following campaign.

However, the Gabon international had a fall-out with Arsenal and their manager Mikel Arteta last season over disciplinary issues. He was first stripped of the captaincy before having his contract terminated ahead of a February move to Barcelona.

Chelsea has been playing without a recognised striker after Romelu Lukaku moved back to Inter Milan on loan in the close season while Timo Werner returned to RB Leipzig.

The London club, 10th after five games, have signed a number of high-profile players in the transfer window, including Raheem Sterling and Kalidou Koulibaly.

Meanwhile, full back Marcos Alonso, who joined Chelsea in 2016 for around 23 million pounds ($26.6 million) and had one year left on his contract, has joined Barcelona as part of the deal according to media reports.