India batter and former skipper Virat Kohli has finally come back into form and so far in the ongoing Asia Cup 2022, he has been in phenomenal touch, scoring 154 runs in three matches. On Tuesday, Kohli posted an Instagram story, sharing a quote which read: “Notice the people who are happy for your happiness and sad for your sadness. They’re the ones who deserve special places in your heart.” Kohli wrote “Word” below this quote. 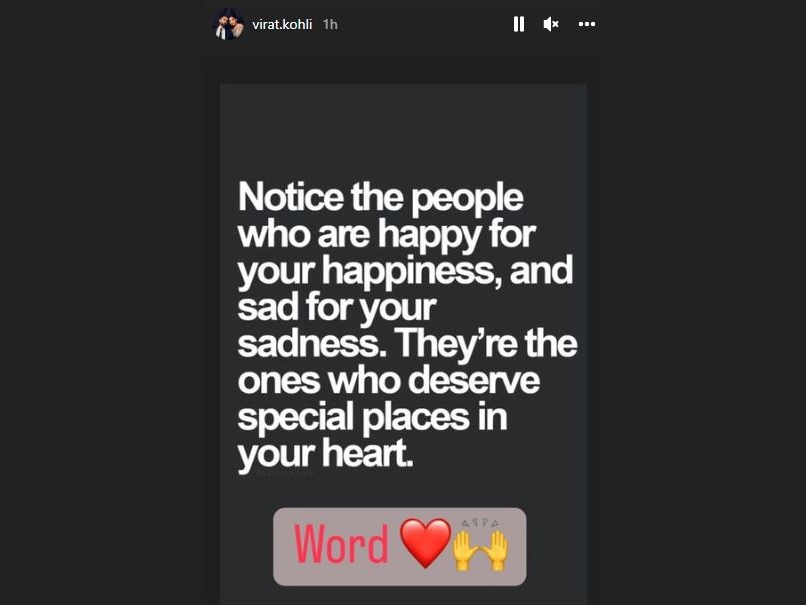 This Instagram story comes a day after Kohli held an emotional press conference, where he revealed that it was just MS Dhoni who texted him when he left the Test captaincy in January this year.

“When I left Test captaincy, I only received a message from one person and I have played with that person in the past. That person is MS Dhoni, anyone else did not message me. Many people have my number, and there are many people who give me suggestions on the TV. There was just MS Dhoni who messaged me, many people have my number, but they did not text me. When you have genuine respect and connection with someone, you are able to see that because there is security from both sides,” said Kohli during a post-match press conference.

“I don’t want anything from him and he does not want anything from me. I was never insecure from him and he was never of me. I can just say that if I want to say something to someone, I will reach out individually. Even if you want to help. If you want to give a suggestion to me in front of the TV or the whole world, it does not hold any value to me. You can talk 1-1, I see things with utmost honesty. It is not like I do not care, but you see the things how they are. God gives you everything, only God helps you achieve success and it is all in his hands,” he further said.

Kohli had stepped down from T20 captaincy after the World Cup and then he was removed as the ODI skipper in the same year as selectors wanted the same captain for white-ball formats. Kohli then stepped down as Test captain after a series defeat against South Africa.

The right-handed batter’s form has been discussed for a long time now as he has not registered an international ton for more than 1,000 days but his recent form in Asia Cup is a very good sign for Team India.