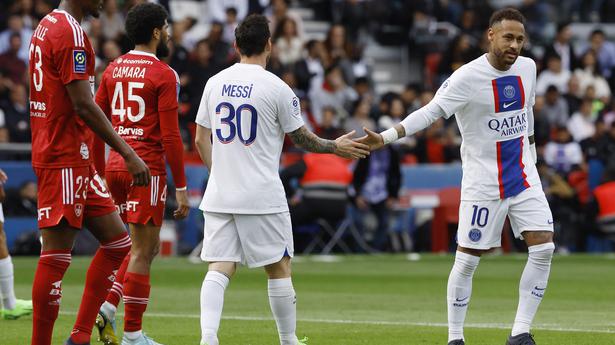 Lionel Messi and Neymar combined to score the defining goal of the match as Paris Saint-Germain (PSG) beat Brest 1-0 at the Parc des Princes on Saturday.

The match saw PSG attack consistently from the word go and in the 24th minute, Neymar’s run for the ball was met with a rash challenge by Brest’s Pierre Lees-Melou.

The referee, Jeremie Pignard gave a red card to the midfielder, which, after a VAR check, the red card was overturned.

Six minutes later, Neymar finally found the break through after Messi’s chip was whacked home by the Brazilian, giving flashbacks of the duo’s chemistry back in Barcelona.

Mbappe came close to scoring in the last moments of the first half, but a good save by Marco Bizot denied any chance for the Ligue 1 champion to double its lead.

Messi, who remained the architect of attacks throughout the match, also tried his shot on goal, but saw one come off the post and the other saved by Bizot.

Brest’s most promising chance to equalise came in the 70th minute after a Presnel Kimpembe foul on Noah Fadiga gave it a penalty. Islam Slimani took the free kick, but his shot on the right was saved by Gianluigi Donnarumma.

With the win, PSG went on top of the table, with 19 points while Brest sits 17th in the league table with its third loss in the last four matches in the league so far.