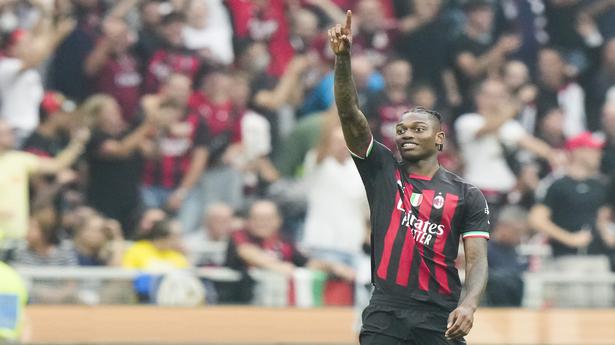 Two goals by Milan forward Rafael Leao helped the defending champion fight back from a goal down and earn a 3-2 win over local rival Inter on Saturday in its fifth Serie A match of the season.

Inter midfielder Marcelo Brozovic scored his first Serie A goal of the season in the 21st minute after an assist by forward Joaquin Correa following a brilliant counterattack orchestrated by forward Lautaro Martinez.

Stefano Pioli’s side kept pressing but spurned a host of chances before the halftime whistle.

Milan forward Olivier Giroud completed the comeback in the 54th minute with a weak but effective strike as it caught Handanovic unprepared.

Leao scored his second goal after swiftly moving past the Inter defence and firing home in the 61st minute to extend the lead.

Inter did not go down without a fight, however, and scored just seven minutes later through forward Edin Dzeko, whose strike bounced off the post and slipped in.

Milan keeper Mike Maignan delivered a superb performance, keeping out further efforts by Inter which kept pressing until the end but was denied an equaliser.

Milan tops the table on 11 points after five games and travels to Sampdoria next Saturday while Inter, fifth with nine points, hosts Torino on the same day.