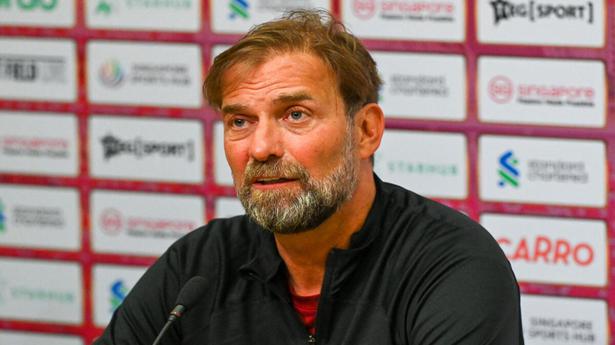 Liverpool manager Jurgen Klopp said Friday he was reluctant to dip into the transfer market in order to solve “four-week” injury problems.

Reds centre-back Ibrahima Konate suffered a knee injury in the friendly against Strasbourg on Sunday which Klopp said will see the defender out “for a while”.

None of the absentees are understood to be suffering with long-term injuries, however.

“We have too many injuries, that’s true,” said Klopp speaking Friday on the eve of Liverpool’s Premier League opener away to Fulham.

“But in the moment nothing has changed (in terms of new signings). A lot of unlucky situations. Started with Caoimh and Diogo, pretty much one was injured and one had a re-injury.

“In a few weeks’ time they will be back, but they’ve missed pre-season and that’s not cool.

“Ibou in a challenge in the game against Strasbourg, what happened there we have to see how long it will take but he’s out for a while.”

But the German boss, who saw his side just denied a historic quadruple last season after Manchester City pipped them to the Premier League and Real Madrid beat Liverpool 1-0 in the Champions League final, was cautious about re-entering the transfer market.

“We cannot solve a problem we have for four weeks with a transfer for a full year,” he said. “That makes at the moment no sense to us.

“The transfer window is still open and we will see but the plans are not to go in that direction.”