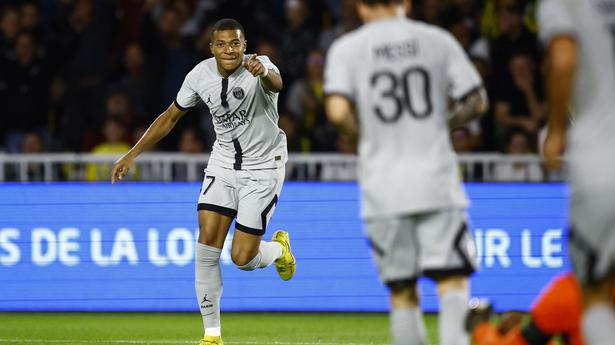 Paris Saint-Germain completed a dominant performance and beat Nantes 3-0 in the Ligue 1 on Saturday at the Beaujoire Stadium.

Kylian Mbappe was the first player to get on the scoresheet in the 23rd minute. Messi dribbled the ball from the centre of the field and tapped the ball into the Frenchman’s path.

Mbappe dropped his shoulder and finessed the ball into the top right corner to hand his side the lead.

To add to Nantes’ misery, defender Fabio was shown a red card in the very next minute for a tackle on Vitinha. The PSG midfielder was injured and had to replaced by Renato Sanches.

Nantes somehow survived the onslaught from PSG for the remaining first half and went into the 15-minute break just one goal down.

Messi and Mbappe combined again in the second half to double the advantage for the visitors. The goal was cancelled out for offside but the VAR ruled in favour of PSG.

Mendes scored the final goal of the game from a rebound after a Neymar shot that hit the woodwork.

The win sends PSG back to the top of the Ligue 1 standings with 16 points after six games. Olympique Marseille had taken the pole position earlier today but the three goals by PSG today ensured its goal difference was superior at 20.

PSG will now face Juventus in the its opening group match in the UEFA Champions League on Tuesday.