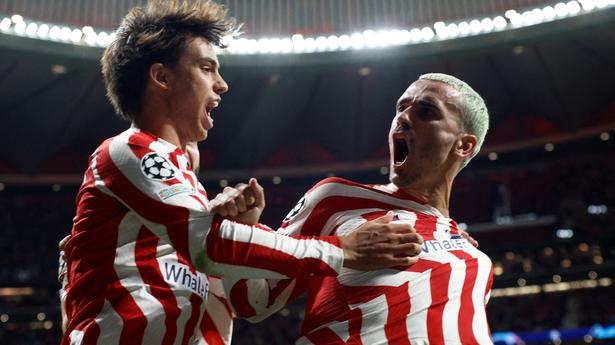 A goal in the 11th minute of stoppage-time by Antoine Griezmann earned Atletico Madrid a 2-1 home win over 10-man Porto in the Champions League on Wednesday after a frantic end to the match with all the goals coming in added time.

Atletico, who was without a victory in its last eight home fixtures in European competition, is level on three points in Group B with Club Brugge who beat Bayer Leverkusen 1-0.

With the sides meeting in the competition’s opening group fixture for the second year in a row, the game sprung to life after a dull first half when Atletico midfielder Koke smashed home in the 50th minute but the goal was ruled out for offside.

Atletico goalkeeper Jan Oblak was crucial to the hosts keeping a clean sheet through regulation time as the Slovenian made several good saves, including from a fine effort by Stephen Eustaquio in the 54th minute.

In the 81st minute, Porto were reduced to 10 men after striker Mehdi Taremi received a second yellow for diving inside the box.

Atletico had failed to register a single shot in the second half as full time approached but a minimum of nine minutes were added on following a lengthy delay when Porto midfielder Otavio was injured and had to be carried off the pitch on a stretcher.

Porto midfielder Mateus Uribe levelled four minutes later from a penalty after Hermoso handled the ball inside the area.

With a 1-1 draw looming at the Metropolitano Stadium, substitute Griezmann sealed victory for the hosts with a close-range header in the 101st minute after Axel Witsel set the Frenchman up with a superb header following a corner.

“We did not play a good game,” Atletico coach Diego Simeone said.

“There were almost no chances for (any of the teams). One for (Porto) in the second half, the disallowed goal for us, a weak shot from Koke in the first half… But very little from the game.”

It was only the second time in Champions League history that three goals have been scored in the 90th minute or later — excluding extra time — with the first coming last December when the same two teams met in Portugal.

“I never talk about luck, but my players were superior, Atletico didn’t arrive (for the game) until the second half,” Porto coach Sergio Conceicao said.

“At some point Simeone didn’t know what to do to hurt us. The performance of my players was fantastic.

Atletico next travels to Leverkusen on Sept. 13 when Porto hosts Club Brugge.