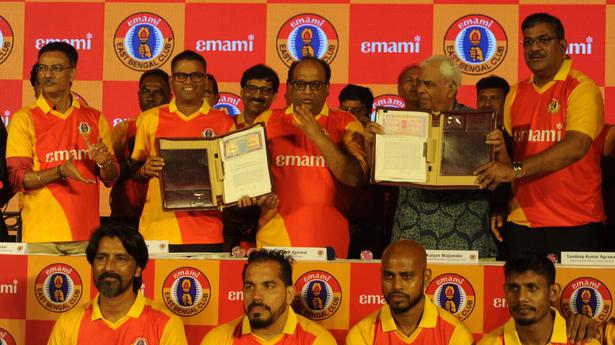 East Bengal Club’s aspirations of continuing in the IndianSuper League received a boost with the city-based diversified business conglomerate Emami Group signing an agreement to become the new “investor” for the century-old club, on Tuesday.

The arrival of Emami Group induced a fresh lease of life in East Bengal, which was left looking at an uncertain future after the departure of its previous investor, Shree Cement, early in April.

Emami Group, which is a Rs. 25000 crore business conglomerate with a presence in diverse sectors, has “pledged to develop the East Bengal club as one of the premium footballing brands in the country,” announced Aditya Agarwal, one of the directors of the group.

The agreement saw the two forming a joint venture company, named Emami East Bengal FC Private Limited. The new arrangement will have Emami Group enjoying 77 per cent of the share in the company while East Bengal club will have the remaining 23 per cent. “The board of directors will be set up in the same ratio with Emami Group having seven and East Bengal getting three members in the company,” said Debabrata (Nitu) Sarkar, a senior functionary of the Club.

The officials did not mention the specific time frame of the agreement, which Aditya Agarwal described as a “continuing relationship like the institution of marriage.”

With most of the ISL teams having contracted the majority of the Indian players available in the current talent pool, East Bengal will not have much to choose from when it comes to team formation for the upcoming season. “We have offered pre-season contracts to some players and are looking to get some more names by paying a transfer fee from other clubs,” Sarkar said. The foreign recruits will be identified by the team’s new coach, Stephen Constantine, it was informed.