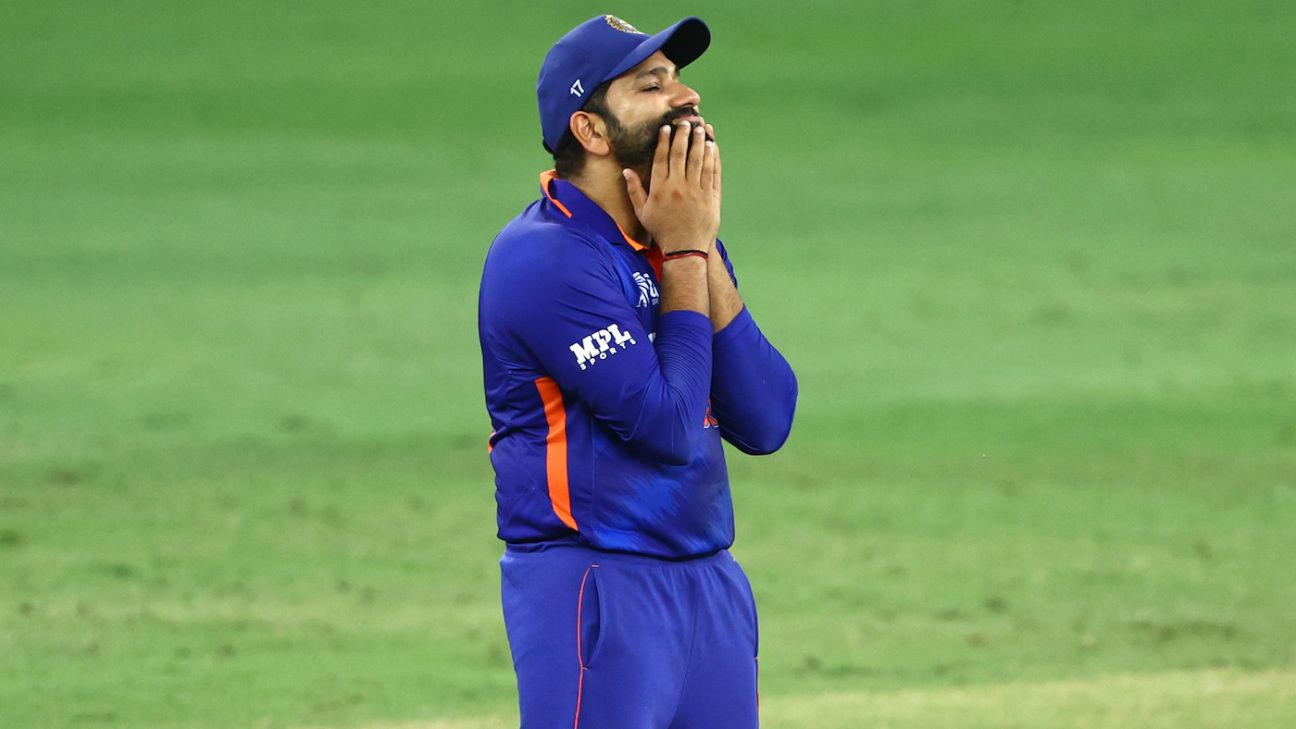 All of these must mean a fair few concerns for any team, right? If Rohit Sharma is to be believed, these aren’t panic stations just yet. Perhaps not panic stations but definitely a worry? Nope, not really. Because India have trained themselves to think in such a way that wins and losses are merely part of a bigger picture at the moment, and that big picture is the T20 World Cup next month.

Even if those two losses have come in a multi-nation tournament. Let’s be clear. These are the words of a captain who has full faith in his team and their ability to bounce back. Rohit spoke for a good 20 minutes, answering several questions dissecting India’s loss. The one thing he didn’t want these two losses to be associated with was “panic” or “nerves” or “meltdowns”. He seemed slightly irked, unlike his otherwise jovial self at media interactions. So irked that he even offered a free invitation into the dressing room to see the mood in the camp.

“I don’t think there’s anything wrong, it looks like it from the outside, but we don’t look at it that way,” Rohit said. “I’ve been at many press conferences, and when you lose such questions will be asked. It’s normal. But as far as the team is concerned you can go in [the dressing room] and see, all the boys are relaxed and chilled. We need to have such an atmosphere whether you win or lose.”

Convinced? No? Okay, worry not. He wasn’t going to stop there.

“We’ve worked hard to make the team atmosphere that way and all the boys are happy about it. If the dressing room mood is good, eventually the performances you see will happen on the ground. Before the World Cup, it’s important for us to keep the atmosphere good and not judge the boys by wins or losses, performances and non-performances. Because whoever is here, they’re all good. That thought we need to be consistent with.”

India’s fate in the Asia Cup is no longer in their hands after their loss to Sri Lanka. They have to beat Afghanistan, but even before they get there, their fate could be sealed on Wednesday if Pakistan beat Afghanistan. The situation is exactly like it was at the T20 World Cup last year, where two straight losses left their campaign in jeopardy. Anything after that was merely a formality, because deep down everyone knew it was all but over.
Rohit was also crystal clear “90-95% of the team was settled” and that their quest to try out different things had one result in mind: finding their best XI. Never mind what coach Rahul Dravid spoke of earlier last week, when he said there wasn’t going to be any experimentation. Truth be told, India have been hampered with injuries to Ravindra Jadeja and the absence of two key fast bowlers – who can also hold their own in the death overs – Jasprit Bumrah and Harshal Patel.
In the last two matches, India have been playing two frontline seamers – Bhuvneshwar Kumar and Arshdeep Singh – along with a third in Hardik Pandya, the allrounder. In Jadeja’s absence, they’ve played two frontline spinners and a third in part-timer Deepak Hooda, who hasn’t bowled in the two games he has played so far.

“It’s 90-95% settled, just a few changes that will happen,” Rohit said of the team combination. “When you talk about experiments, yes, we wanted to try out certain things. If you look at the combination we have been playing before the start of the Asia Cup, it was with four seamers, two spinners and the second spinner was an allrounder. I always wanted to try and find answers as to what happens if you play with three seamers and two spinners, and the third spinner being an allrounder.

“When you’re playing against quality opposition, you want to challenge yourself. This was missing in our books; we’d never tried that combination. We wanted to try and see what happens here as well. In hindsight, our fourth seamer [Avesh Khan] who was here was not available for selection for the last two games because he was sick.

“Yes, there are a lot of questions we need to answer, and along the way, in the three-four series we’ve played, we have found some answers. There will be a time where we will draw a line and say, ‘this is the combination we want to play for the World Cup.’ After this, we have two more series and then the World Cup. Till our squad is announced, we can try out a few players.”

Rohit was then asked if there was any merit in playing Hooda if he wasn’t going to bowl. On Wednesday, India made a tactical pick by bringing R Ashwin into the XI to try and win the match-up battle with Sri Lanka’s left-hand batters. But with Pathum Nissanka and Kusal Mendis, the two right-handed openers, adding 97 in 11.1 overs, Rohit wasn’t left with much breathing space to introduce Hooda’s part-time offspin.

“In the three-four series we’ve played, we have found some answers. There will be a time where we will draw a line and say, ‘this is the combination we want to play for the World Cup’.”

“Yes, we have the sixth bowling option, but we also wanted to try out with five options and see what happens and what doesn’t happen,” he explained. “Today Hooda was there, but both their right-handers [openers] were set, and I didn’t think I could bring him on then because we were looking to take wickets through our attacking spinners Ashwin and [Yuzvendra] Chahal. Yes, if we got early wickets, I wanted to bowl Hooda, he was in my plan. But yes, six options is always nice. When we play the World Cup it will be at the back of our mind to play with six options.”

What about Rishabh Pant versus Dinesh Karthik? It was unlikely Rohit was going to leave without being asked that. What was likely, and perhaps predictable, was the reasoning, which, all said, isn’t without merit. Jadeja’s absence has meant India don’t have another left-hand batter in the top six, which led to Pant getting the nod ahead of Karthik.

“See, it is simple. We wanted a left-hander to bat in the middle,” Rohit said. “That’s why Dinesh Karthik is out. Not because of form or anything. We wanted a left-hand batter in the middle to take pressure off, but it didn’t happen. But by no means DK has been dropped because of poor form. We always want to have flexibility in the group. We will keep changing players every now and then depending on the opposition. Four-five batters will play, but there will always be those one-two changes in the batting.”