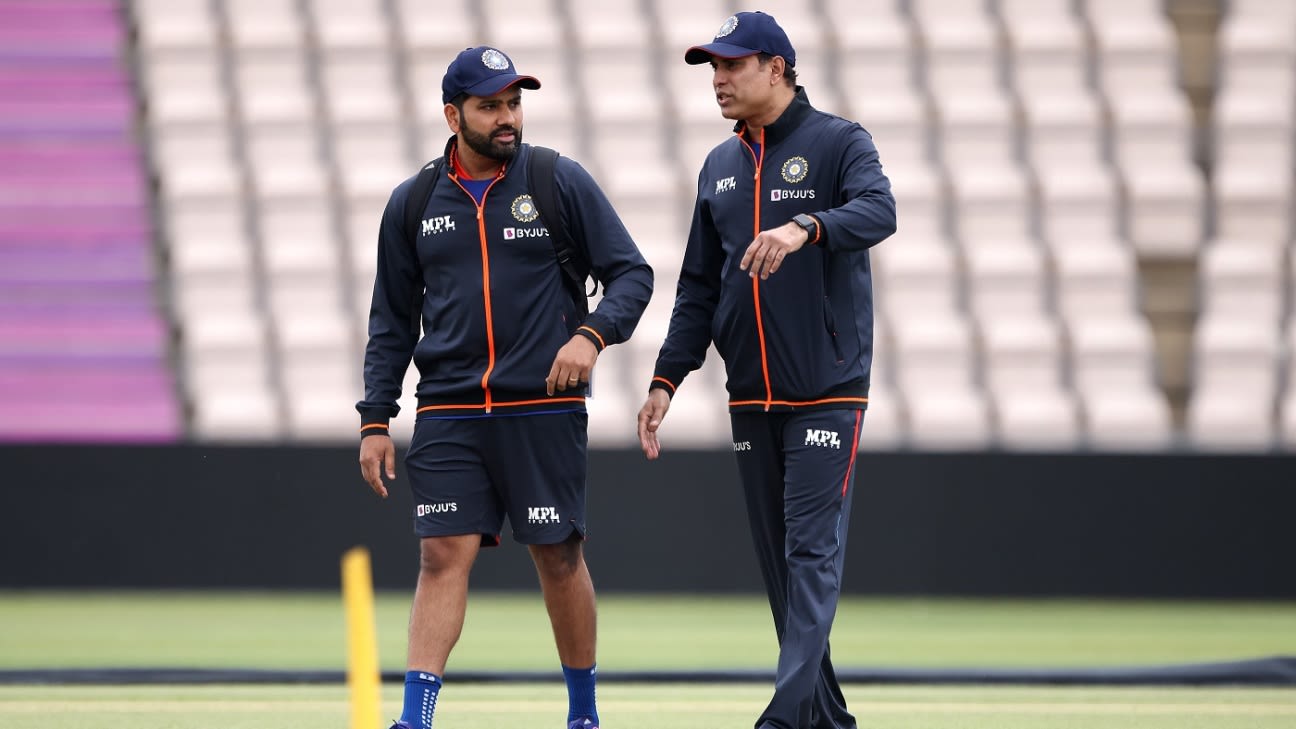 Rohit Sharma found India’s defeat in the Edgbaston Test “very hard to watch from the sidelines”, but is now excited at the prospect of merely “standing back on my feet nice and healthy” after a brush with Covid-19.
Rohit, the only addition to India’s squad that toured Ireland, will lead the side in the T20I series opener in Southampton, on Thursday. Having trained for three straight days in Birmingham, he linked up with the rest of the group on Thursday afternoon.

“It was very hard to watch from the sidelines, it’s never an easy situation when you miss games, especially an important game like that, where the series was on the line for us,” Rohit said after a training session at Ageas Bowl.

“A couple of days I was struggling a little bit, but I’m happy I’m standing back on my feet nice and healthy as I look forward to this T20 series followed by the ODI series. It’s always nice to get back and get back playing, that’s the most important thing. I’m excited to be on the field and getting along with the boys.”

It’s been over a week since Rohit tested positive, but the wait to return to training extended beyond the mandatory five days of isolation. Having now returned three Covid negative tests, Rohit is feeling “fit and fine”.

“My recovery has been good,” he said. “Eight-nine days it’s been since I tested positive. We’ve seen how every player has responded differently to Covid. Am not sure what will happen, but for now, I am fit and fine.

“I resumed training three days back, which is why I decided to play in this game, because body-wise, I’m feeling better. There are no symptoms now. I have returned two-three negative tests. I’m just looking forward to the game, it’s going to be an exciting one.”

Hardik Pandya and Ishan Kishan at a training session•Getty Images

Rohit’s first act upon arrival was to catch up with interim coach VVS Laxman, who oversaw the team in Ireland and during the two warm-ups in England in the build-up to the series. The chat was to understand where each player is at.

Rohit said that while India will have an eye on their World Cup preparation, winning was equally a massive part of their thought process. And every game was about “ticking boxes off”.

“Of course [we are] keeping one eye on the World Cup definitely,” he said. “I wouldn’t say it’s preparation. Every game for India matters to us. We want to come here and try and tick every box we have and make sure we get the job done, as simple as that.

“Of course, there are a lot of younger players who are getting the opportunity to represent the country through their performances of their state teams, IPL teams. They deserve their opportunity. England is going to be a very challenging team for us, I’m pretty sure these boys have been here for a while. They went to Ireland; they played a couple of practice games here. Now we look forward to this T20 series and thereafter the ODI series as well.”