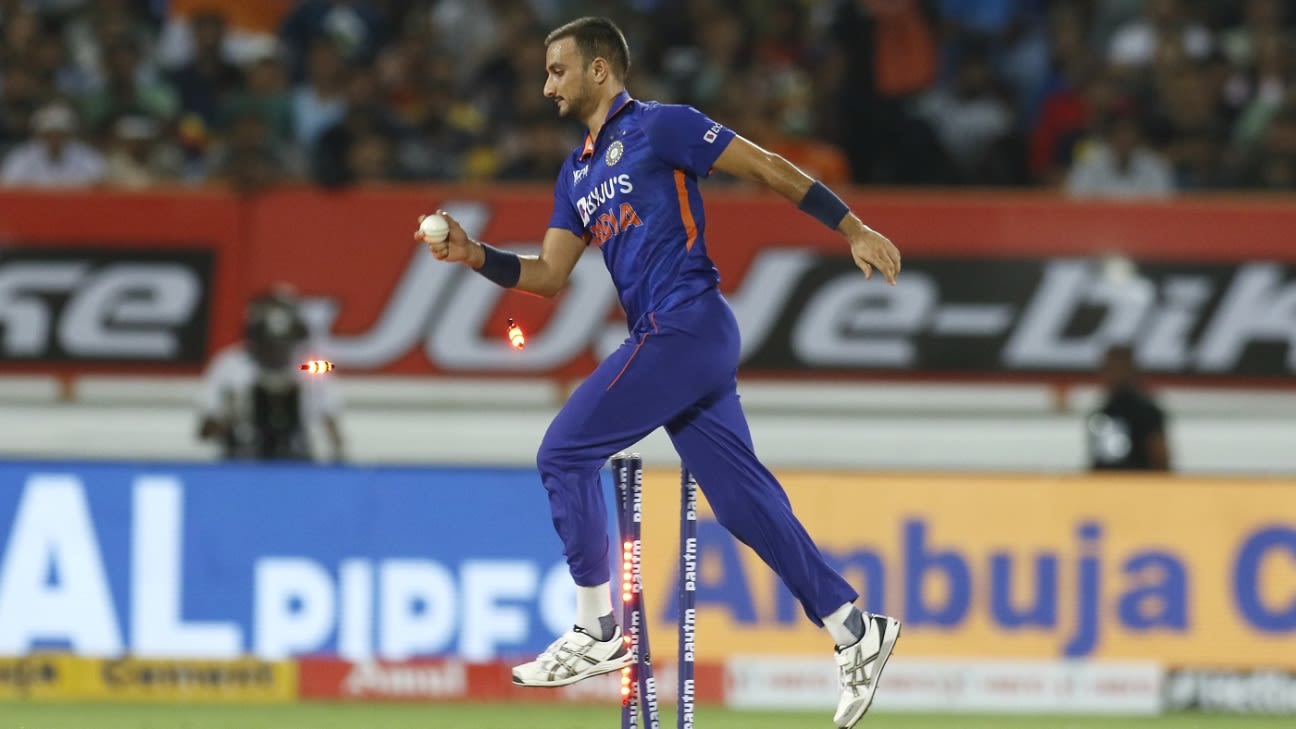 Training without the fear of competition has been liberating for Harshal Patel.
Having recovered from a rib injury that ruled him out of the Asia Cup that just finished in the UAE, Harshal is looking forward to life on the road again, which will soon include a maiden World Cup appearance. But first he has to deal with the T20Is against Australia starting on Tuesday in Mohali.

Harshal has spent the past four weeks in rehabilitation at the National Cricket Academy in Bengaluru. The first two weeks were spent working on his physical conditioning, before he resumed bowling. One of his key focus areas has been to be ahead of the curve and continue as the X-factor bowler teams yearn for.

“I want to be tighter with my execution,” Harshal told ESPNcricinfo in August. “And I achieved that more or less last IPL [19 wickets in 15 matches]. I will continue to strive for that. If I’m bowling one or two bad balls out of 24, [I want to see] if I can completely eliminate that.

Known for a terrific slower ball, cutters and a potent dipping yorker that vaulted him to the top of the wicket-taker’s charts at IPL 2021, Harshal rode the wave of confidence to earn the India cap last November.

Nearly a year on, he’s emerged as a key member of India’s T20I arsenal. The time off due to injury, he believes, has helped him explore different facets of his craft apart from working on their execution, which is the “tougher bit.” Two of those areas are his new-ball bowling and variations in lengths.

“I’ve explored a little bit in terms of the lengths I can bowl with the slower ball,” he explained. “Usually when I bowl the slower balls, it’s mainly fuller or at the good length. But now I’ve started bowling more shorter slower balls which are working out very well for me. That’s one thing obviously.

“I’ve also been working on my new-ball skills for a while. I started doing that mid-IPL. Just because in the IPL, what I was supposed to do [mainly middle-overs and death bowling], all my skills were top notch, so I didn’t need to work on them.

“So, every time I’d go to practice, I’d take a new ball and start bowling with it because it’s good to have a skill and not need it than the other way round,. It’s just something I’ve been working on and if I get an opportunity, for India or for RCB [Royal Challengers Bangalore], I would love to do that.”

Harshal is deeply analytical about his skills, and challenges himself to get better. That the team management have been clear of what they expect of him has helped, too.

“My ability to bat at No. 8 is something they [team management] really value”•Getty Images

Harshal’s utility has been mainly in the middle and death overs. In the 30 T20s this year, he has bowled 54 overs in the middle phase for 19 wickets at an economy go 6.61 and 41.1 overs at the death for 18 wickets at 10.17. In comparison, in the 11 innings where he came on in the first six, he has averaged just one over per game.

“They [Rahul Dravid and Rohit Sharma] have been nothing but supportive,” Harshal said. “Whatever the team ethos is, they have taken precedence over individuals, which is a great thing.

“They told me my role exactly. They said, ‘we want you to be able to bowl in all three phases, not just middle and death’. They’ve been bowling once at the end of the powerplay every single game just to get used to that.”

It isn’t just his bowling that has been under works. There’s been improved vigor towards ball striking, something he takes great pride in. He admits the regular stream of matches left him with little time to work on that area, but that isn’t the case anymore.

“My ability to bat at No. 8 is something they [team management] really value,” he said. “I have not been working a lot on my batting because of time constraints, because you’re constantly in competition. But during rehab, I’ve had a chance to hit 500-700 balls over two-three weeks. It’s something I’ve wanted to work on for quite a while because I really want to contribute in that capacity as well.”

What has helped along the way is clarity of roles and backing from the team management. Harshal believes this is critical for individuals from a mental standpoint, because it helps in better decision-making, especially when players return from injuries.

“It does take a bit of pressure off you,” he says of the backing from the captain and coach. “Because sometimes people make foolish decisions when they’re returning to play. They’re either trying to do too much or trying to push a little faster because they feel that their place is in danger or for whatever reason.

“But if you know for a fact the team management will remember what you’ve done one prior to getting injured, and those performances and contribution will not be forgotten, then that gives you a sense of calm or comfort that once you go back into the team – obviously you will have to perform again and again and that goes for every single cricketeer – you know that you will hold that place in the team.”

As Harshal looks ahead, the mention of ‘World Cup’ brings a smile to his face. He grew up like any other kid dreaming of playing in one, and that dream is closer to realisation now and there’s plenty of “excitement and nervous energy” bursting at the seams.

“Obviously I am super excited,” he said. “I will get nervous at some point, but at this point of time, I’m just excited. The two World Cups India have won in 2007 and 2011, I vividly remember where I was and what I was doing.

“After we won the World Cup, like every kid, we took our scooters and went onto the roads to dance and jump and shout. It would be great if I could play and if we end up winning the World Cup, to have that circle completed would be a great feeling. But [right now] it’s going to be a lot of excitement and nervous energy.”