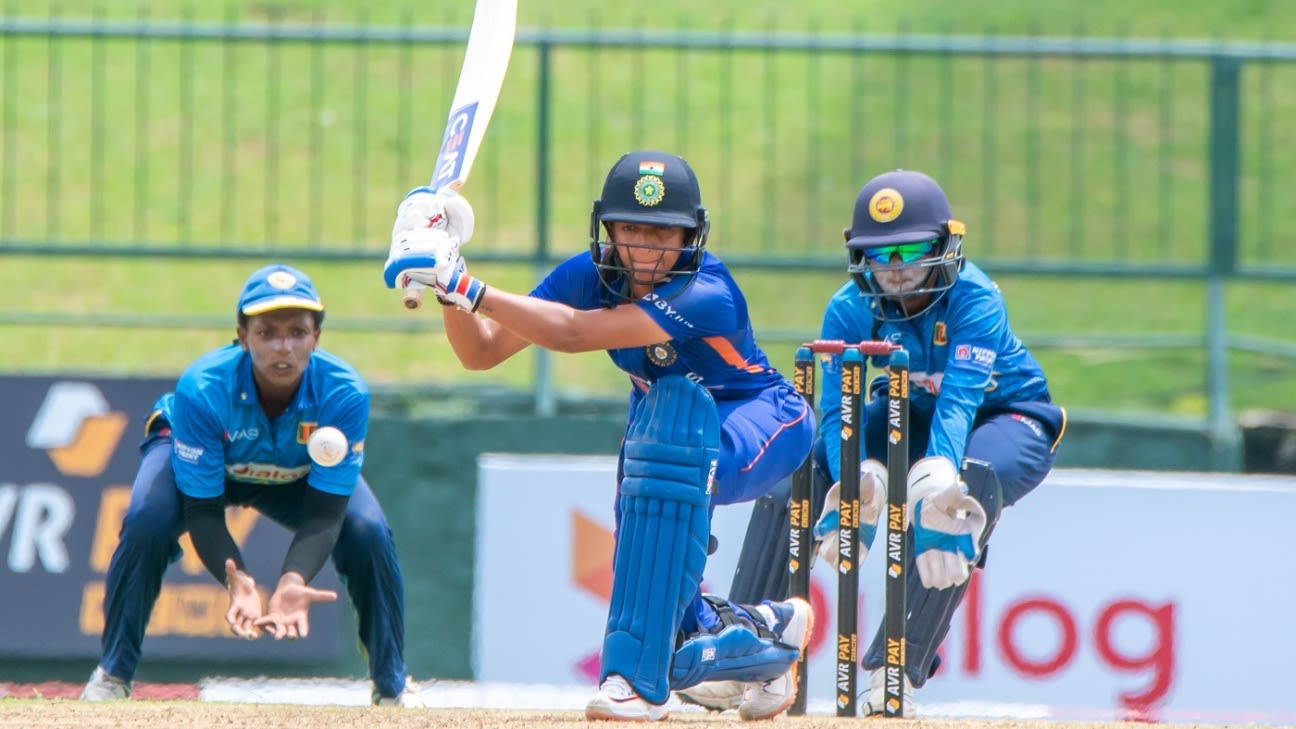 India’s white-ball captain Harmanpreet Kaur has attributed her current form with the bat to a bit of “self-talk” and the fact that she has “enjoyed” being in the middle. She is also glad she now has the “freedom” to bowl regularly, something she said wasn’t possible earlier because of the “game plans”.
After playing a crucial role in India’s 2-1 win in the T20I series, Harmanpreet racked up 119 runs across the three ODIs, including an 88-ball 75 in the third ODI, to take her team to a clean sweep in her first series as the full-time captain in the format. She bagged Player-of-the-Series awards in both formats. While admitting that she wasn’t enjoying her cricket for a while in the past, she is “relaxed and happy” all the plans worked out well on the tour.

“For me, it’s always important that I should enjoy each and every moment,” Harmanpreet said. “Sometime in between, I was not enjoying because sometimes you take a lot of pressure – it happens with anyone. I was going through those things but now I have made a plan that I have to enjoy. Whatever the situation, I’ll try to stay there and give the start the team needs. That’s what I’ve been trying in the last few months.

“Moreover, the way the team is responding is something I’m enjoying more. Because when you have experienced players with you, they want to support you in all the parts. Our medium-pacers – I actually wanted to give more opportunities to them. I’m happy they have grabbed that opportunity. We were always depending on spinners in the first few overs but they took the responsibility and gave those results. When whatever you have planned goes your way, you are going to enjoy it. Maybe that was the reason I was more relaxed and happy because everything was going according to our plans [in the series].”

Harmanpreet also contributed with the ball in both series, taking two wickets in the three ODIs with her offspin. Out of 121 ODIs she has played so far, she has bowled in 68, taking 31 wickets, but she hinted that she could be bowling more regularly in the coming days. In the third ODI, she bowled five overs and picked the crucial wicket of Sri Lanka captain Chamari Athapaththu.

“I had also told our head coach [Ramesh Powar] that I was available for bowling [earlier] but because of some game plans, I didn’t get to bowl… I’m glad I [now] have the freedom to bowl”

“I think before we came here, I had a self-talk that I have to give my 100% and it was important that I get runs in this series,” she said. “I’m very happy I got wickets also because I want to bowl and I was always keen to bowl. I was really happy that I was able to do both things.

“I had also told our head coach [Ramesh Powar] that I was available for bowling [earlier] but because of some game plans, I didn’t get to bowl. I was lucky that in the last game [India played at the 2022 World Cup], I got a few overs to bowl. I have been planning for a long time that I should get to bowl [more]. I am glad I was able to get those breakthroughs. I always wanted to bowl and I’m glad I [now] have the freedom to bowl.”

Earlier this year, Harmanpreet spoke about being more comfortable batting at No. 4 than No. 5 but on Thursday, she walked in at No. 6. She later revealed that the plan was to bat even lower down the order so that others can get a chance to bat in the middle ahead of the Commonwealth Game, which begin later this month. But she had to come out at No. 6 after India lost the wickets of Shafali Verma and Harleen Deol in space of three balls, leaving them 94 for 4.

“We wanted to give chance to our top five batters… if Harleen [Deol] can get some time at the wicket and Richa [Ghosh] also. But we lost two wickets early and I had to go otherwise we were only looking if others can get a chance to bat. The CWG is very important, and for me, it’s important that the batting unit should get enough balls to bat. That’s the reason we shifted my batting order because I got a good amount of batting in this tournament.”

She was also impressed with Pooja Vastrakar, who negotiated Sri Lanka’s spin threat and scored an unbeaten 56 off 65 balls from No. 8.

“She [Vastrakar] has been showing she can bat also. One thing we discuss in the dressing room is that whoever is going to bat, that person is capable of getting runs for the team [regardless of their batting position] and whoever is bowling can take a wicket. Whoever is in the playing XI is capable of doing both things. Pooja Vastrakar has done really well so far and I think that batting order really suited her and in future, if we need to change something, we will take charge accordingly.”

Sruthi Ravindranath is a sub-editor at ESPNcricinfo