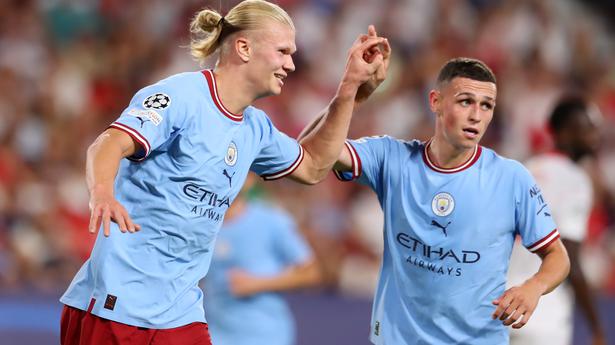 Erling Haaland continued his free-scoring start to life at Manchester City with two more goals in an impressive 4-0 win over Sevilla in Champions League Group G on Tuesday.

The Norwegian has now scored 12 goals in seven competitive games for City since joining the club from Borussia Dortmund during the close-season.

The goals also made the 22-year-old the fastest player to score 25 goals in the Champions League — a milestone he has reached in just 20 matches.

The blond striker put City ahead in the 20th minute, stretching to reach a cross from Kevin De Bruyne and place it past Sevilla keeper Yassine Bounou.

De Bruyne then found himself one-on-one with Bounou, after breaking clear, but this time the Moroccan goalkeeper pulled off a fine save to deny the Belgian.

Sevilla has managed just one draw from its opening four games in La Liga and it struggled to cope with City’s swift movement in a one-sided game.

FULL-TIME | A very impressive start to life in Group G!

Phil Foden made it 2-0 after the break, jinking and turning to create space on the edge of the box before placing the ball into the bottom corner.

Ilkay Gundogan had an effort disallowed after turning in a header from Foden, who was in an offside position but Pep Guardiola’s side soon had the margin of victory their dominance deserved.

Haaland showed his goalscoring instinct to make sure of a comfortable victory, pouncing to tap-in after Bounou had pushed out a low drive from the impressive Foden.

Even with victory assured, City continued to push forward and defender Ruben Dias added the fourth in stoppage time, turning in a low cross from Joao Cancelo.